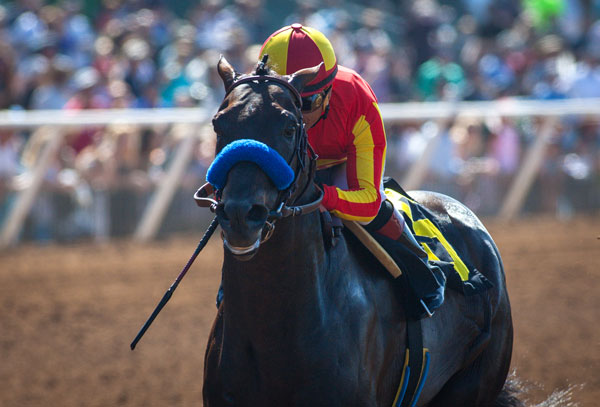 Heavily-favored Gimme Da Lute completed a coast-to-coast stakes double for trainer Bob Baffert Sunday as the three-year-old colt emulated his Triple Crown champion stablemate American Pharoah, winner of the $1.75 million Haskell Invitational, with a romping triumph in the featured $200,000 Real Good Deal Stakes at Del Mar.
While Baffert was in New Jersey sending out American Pharoah to a brilliant victory in the nine-furlong Haskell at Monmouth Park, Gimme Da Lute drew off in the Del Mar stretch for an impressive twelve and one-quarter length win in the seven-furlong Real Good Deal for California-bred sophomores.
Martin Garcia piloted Gimme Da Lute, a son of Midnight Lute owned and bred by the partnership of Mike Pegram, Karl Watson and Paul Weitman. Scoring his fifth win in eight starts, the colt earned $110,000 to increase his career bankroll to $567,560. As the 2-5 favorite, he returned $2.80, $2.40 and $2.10. With strong action to show, there was a minus pool of $25,933.
Rocko’s Wheel, a length in front of Grazen Sky at the wire, paid $4.80 and $2.80 while Grazen Sky returned $2.20 to show. Completing the field were Richard’s Boy, Smack Talk and Neveradoubt.
Gimme Da Lute was recording his third stakes success in a row, having won the Affirmed at Santa Anita and the Los Alamitos Derby in his last two starts.
With $968,931 in “new” money wagered Sunday and a one-day carryover from Saturday of $151,427, the total Pick Six pool was $1,120,358. There were 185 perfect tickets and each was worth $3,614.80.
Attendance was 14,802. Racing resumes Wednesday with the first race scheduled for 2 p.m.
MARTIN GARCIA (Gimme Da Lute, winner) – “I stayed busy on him through the stretch. That last race at Los Alamitos (Los Alamitos Derby, Jul7y 4), when he made the lead he tried to pull himself up. I didn’t want that to happen today, so I stayed after him. I didn’t beat him up, just stayed after him. He’s a nice horse.”
JOE TALAMO (Rocko’s Wheel, second) – “Had a perfect trip. Just got outrun today.”
RAFAEL BEJARANO (Grazen Sky, third) – “He tried. The winner was too tough. No excuses.”
MIKE MARLOW, assistant to Bob Baffert (Gimme Da Lute, winner) –“It was not as strong a field as he’s used to and he ran well. I haven’t talked to Bob (in New Jersey to saddle American Pharoah) and I didn’t have any instructions for Martin. Martin works him, and he knows the horse. We just tell him, ‘Go win the race.’ ”
FRACTIONS:  :22.88  :46.11  1:10.12  1:22.33
The stakes win was the first of the meet for rider Garcia, but his second (Seven Nation Army 2006) in the Real Good Deal. He now has 20 stakes wins at Del Mar.
The stakes win was the first of the meet for trainer Baffert, but his fourth in the Real Good Deal. He now has 109 stakes wins at Del Mar, the most of any trainer.
The winner is owned (and was bred) by the trio of Mike Pegram of Scottsdale, AZ and Del Mar; and Karl Watson and Paul Weitman of Tucson, AZ.