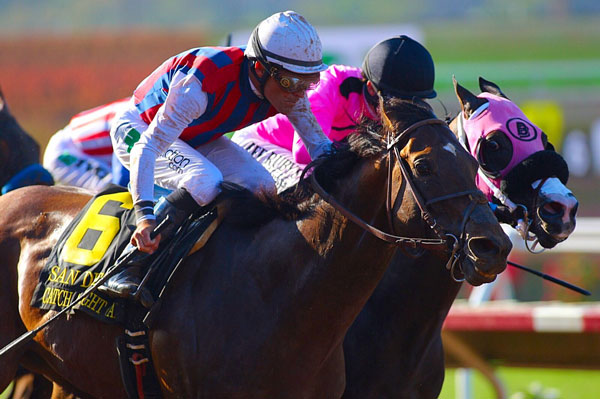 Argentine-bred Catch a Flight, ridden by Hall of Famer Gary Stevens, forged to the front in the final strides Saturday to overhaul Appealing Tale and win the featured $200,000 San Diego Handicap, mile and one-sixteenth prelude to the Grade I $1million Pacific Classic on August 22.
Catch a Flight, a model of consistency since his importation to the United States last year, scored by a head over a stubborn Appealing Tale, who went postward at 9-1 under Joe Talamo and appeared home free until collared by the winner near the wire.
Bayern, 2014 Breeders’ Cup Classic winner, was the 7-5 favorite and finished third, a length and one-quarter behind Appealing Tale,  dueling with that rival shortly after the start and into the stretch where he gave way.
Hoppertunity, a stablemate of Bayern from the barn of trainer Bob Baffert, was fourth as the 5-2 second choice and he was followed by Sahara Sky, Sammy Mandeville and Majestic City. Nowalking was withdrawn from the field.
Catch a Flight, a five-year-old son of Giant’s Causeway owned by Haras Santa Maria de Araras and trained by Hall of Fame conditioner Richard Mandella, was timed in 1:43.08 and as the 3-1 third choice returned $8.40, $3.80 and $2.80. It was the tenth victory in 17 starts for Catch a Flight who increased his bankroll to $573,239 with the winner’s purse of $120,000.
In seven United States races, Catch a Flight never has finished worse than third, with four wins, including the Precisionist and Californian at Santa Anita prior to the San Diego.
Appealing Tale paid $6.80 and $4.40, while Bayern, who was piloted by Martin Garcia and carried highweight of 123 pounds, returned $3 to show.
In Saturday’s supporting feature, the $200,000 Fleet Treat Stakes for California-bred three-year-old fillies, 7-2 second choice Big Book romped to a convincing victory under Rafael Bejarano. Kiss at Midnight was second and 7-10 favored Sheer Pleasure third in a field of six fillies.
Big Book, bred and owned by George Krikorian and trained by Tim Yakteen, ran the seven furlongs in 1:24.77 in winning by two and one-quarter lengths. It was the filly’s third win without a loss and first prize of $110,000 increased her earnings to $178,400.
Big Book returned $9.40, $4 and $2.40. Kiss at Midnight paid $6.60 and $3, while Sheer Pleasure paid $2.10 to show. Abets Abet was scratched from the original field.
With no perfect tickets Saturday, Sunday’s program will feature a Pick Six carryover of $104,269. Post time for the first race Sunday is 2 p.m
GARY STEVENS (Catch a Flight, winner) – “He warmed up differently today. He was chilled out. He must like this Del Mar weather. He was all hot up at Santa Anita, especially for the Gold Cup. I had real confidence in him today. I worked him the other morning and he went great. He’s doing so good. He’s run (in the U.S.) seven times now against good horses and he’s shown up every time. He’s a treat. We got the great set-up today and I rode him better (than last time in the Gold Cup when he finished third). I think this race should set him up nicely for the ($1-million TVG) Pacific Classic (August 22). I don’t think distance is a big thing with this horse; he can handle that. He just needs the set up, and we got it today. I could see Martin (Garcia on Bayern) was out of horse at the three-eighths (pole). I was just hoping that Joe (Talamo on Appealing Tale) would come back to me. He did, just enough and my horse was good enough.”
JOE TALAMO (Appealing Tale, second) – “Brutal. Just a brutal loss.”
MARTIN GARCIA (Bayern, third) – “He didn’t try. I don’t know if something’s wrong, but he didn’t try.”
RICHARD MANDELLA (Catch a Flight, winner) – “He won a lot of races in Brazil, not against the highest competition, but it gave him a good bit of experience. He came here and he just keeps getting better and better. He was meant to sit back, but it looked like they were kind of getting away from him at the last turn and I was a little worried. But I guess they used themselves enough that he caught them. The Pacific Classic is next.”
FRACTIONS:  :24.06  :47.80  1:11.30  1:36.34  1:43.08
The stakes win was the first of the meet for rider Stevens, but his second (Cutlass Reality 1988) in the San Diego. He now has 83 stakes wins at Del Mar, tied for seventh most all time. (Stevens recorded the 5,000th victory of his career on Catch a Flight February 13 at Santa Anita.)
The stakes win was the second of the meet for trainer Mandella, but his first in the San Diego. He now has 55 stakes wins at Del Mar, fifth best all time. (Mandella recorded the 2,000th win of his career when Catch a Flight won at Santa Anita on May 3.)
Catch a Flight is owned by Haras Santa Maria de Araras, which is the nom du course of Brazilian businessman Julio Bozano, a billionaire in the finance and banking world. He’s been involved with Thoroughbreds for more than three decades and has breeding operations in Argentina and Ocala, FL.