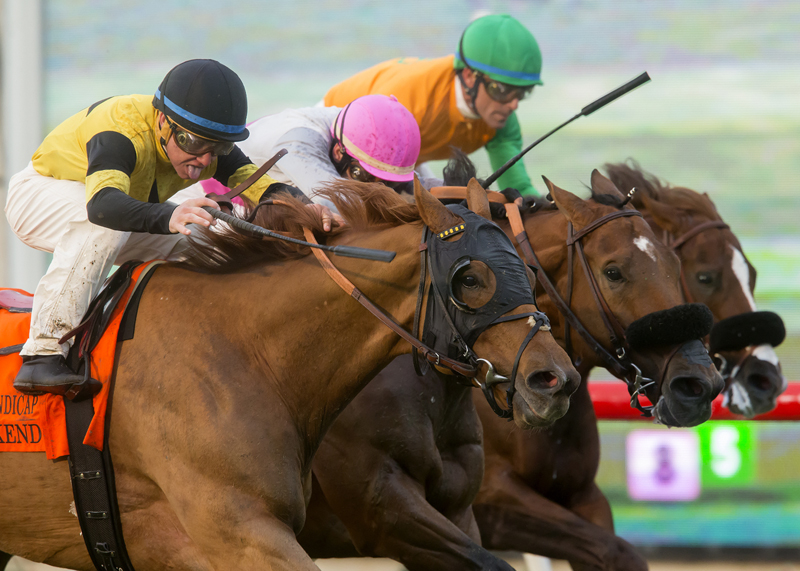 Ring Weekend (outside) © Benoit Photo
Eastern-based trainer H. Graham Motion and jockey Drayden Van Dyke collaborated to sweep Del Mar’s stakes doubleheader on a rainy afternoon Saturday, winning the Grade III $100,000 Jimmy Durante Stakes with Journey Home and the Grade II $200,000 Seabiscuit Handicap with hard-hitting Ring Weekend.
Ring Weekend, owned by St. Elias Stable and West Point Thoroughbreds, prevailed by a head over  Vyjack, with 3-2 favored Om another half-length behind in third. Hunt was fourth in the field of eight older horses.
Ring Weekend, a five-year-old gelded son of Tapit, stepped the mile and one-sixteenth on turf in 1:42.29 in registering his seventh victory in 20 starts. The winner’s prize was $120,000 and increased his earnings to $1,448,744. Second choice in the betting at 3-1, Ring Weekend paid $8, $4 and $2.80. Vyjack paid $4.80 and $2.40, while Om returned $2.20 to show.
In the afternoon’s supporting feature, the Durante Stakes, Journey Home, an invader from the east coast, rallied from last place in a field of 13 two-year-old fillies to win convincingly under Van Dyke.
Journey Home, winner of a maiden race on the grass at Laurel Park in Maryland in her only other race, scored by a length and one-quarter over 5-2 second choice Defiant Honor, with 2-1 favored With Honors a neck back in third and a length and one-half in front of fourth-place Miss Sugars.
Journey Home, a daughter of War Front owned by Sam-Son Farm, accomplished the mile over the infield grass course in 1:38.24 to claim first prize of $60,000. The filly returned $17.80, $8.20 and $4.60. Runner-up Defiant Honor paid $5 and $3.40, while With Honors returned $2.80 to show. Time for the one mile was 1:38.24.
The race was run in rainy, windy conditions as a squall hit the area shortly before post-time for the Durante. Several fillies appeared to jump several  foam drain covers which had blown onto the grass course on the clubhouse turn. The stewards conducted an inquiry and ruled that the incident did not affect the running of the race.
DRAYDEN VAN DYKE (Ring Weekend, winner) – “This race set up on paper that I thought would be perfect for us. Then it played out just that way. It was sweet. We got into the lane and I let him do his thing. He was having a little trouble swapping his leads, but Graham (trainer H. Graham Motion) had told me about that and I was ready for it. About the sixteenth pole he swapped to his right lead and that gave us an extra burst. He was good. This is the first time I’ve won two stakes in one day. Feels good.”
FLAVIEN PRAT (Vyjack, second) – “I had a good trip and he ran well. No excuses.”
GARY STEVENS (Om, third) – “He was game. But I had a pest with me all the way (What a View laying right outside him) and that didn’t help.”
ALICE CLAPHAM, assistant to H. Graham Motion (Ring Weekend, winner) – “I am sure it has happened for Graham to win two stakes in a day, but this is the first time I’ve won two (on travel assignment for him). I talked to him after the first race and he was a little worried at the time that they might call the race a no contest, but he was very happy with the way the filly (Journey Home in the Jimmy Durante Stakes) ran. Drayden (Van Dyke) gave both our horses great rides and it worked out well.”
FRACTIONS:  :24.21  :48.48  1:12.29  1:36.25  1:42.29
The stakes win was the second of the meet for rider Van Dyke, but his first in the Seabiscuit. He now has seven stakes wins at Del Mar.
The stakes win was the second of the meet for trainer Motion, but his first in the Seabiscuit. He now has four stakes wins at Del Mar.