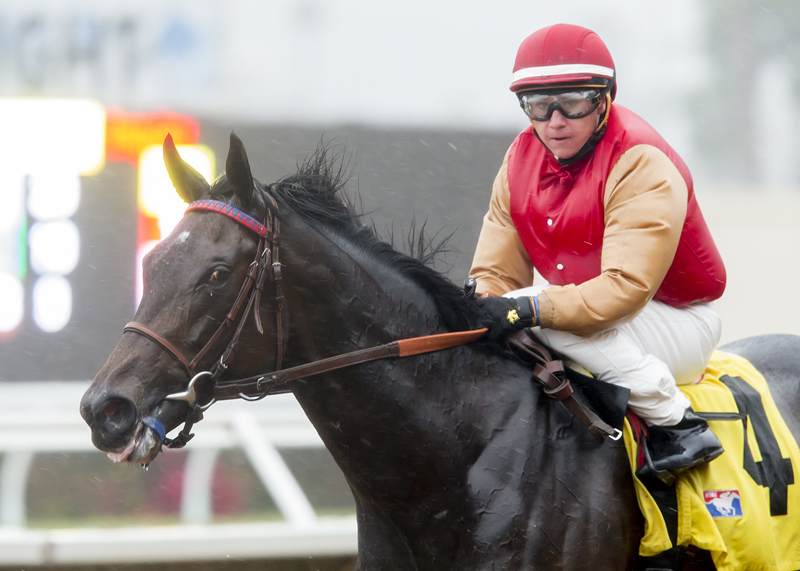 Journey Home © Benoit Photo
DRAYDEN VAN DYKE (Journey Home, winner) – “Man, I had a lot of horse today. Way more horse than I could use. She was just full of run.  I really couldn’t ride her the way I wanted to because of the rain and wind (the track was hit by a squall at race time), but she took care of things anyway. She’s a good one.”
MIKE SMITH (Defiant Honor, second) – “She’s a nice filly. I wish I could have ridden her the way I wanted to rather than putting her on the lead like that. But that was the way it came up. She’s a good one, though.”
FLAVIEN PRAT (With Honors, third) – “She ran OK, but she just doesn’t seem to be the same filly she was before. She might need a break.”
ALICE CLAPHAM, assistant to H. Graham Motion  (Journey Home, winner) – “I thought Drayden (Van Dyke) rode a good race. He let her settle into the race and get her feet underneath her, waited to the top end and then she came home nicely. Everybody’s always liked her but sometimes with 2-year-olds you have to wait until they’re ready and the (winning debut) race at Laurel proved she was.”
FRACTIONS:  :23.75  :48.68  1:13.64  1:26.05  1:38.24
The stakes win was the first of the meeting for rider Van Dyke, but his second in the Jimmy Durante (he won last year’s running on Family Meeting). He now has six stakes wins at Del Mar.
The stakes win was the first of the meeting for trainer Motion and the first in the Jimmy Durante for the eastern-based conditioner. He now has three stakes wins at Del Mar.