Got Stormy Prevails in Grade I Matriarch Stakes 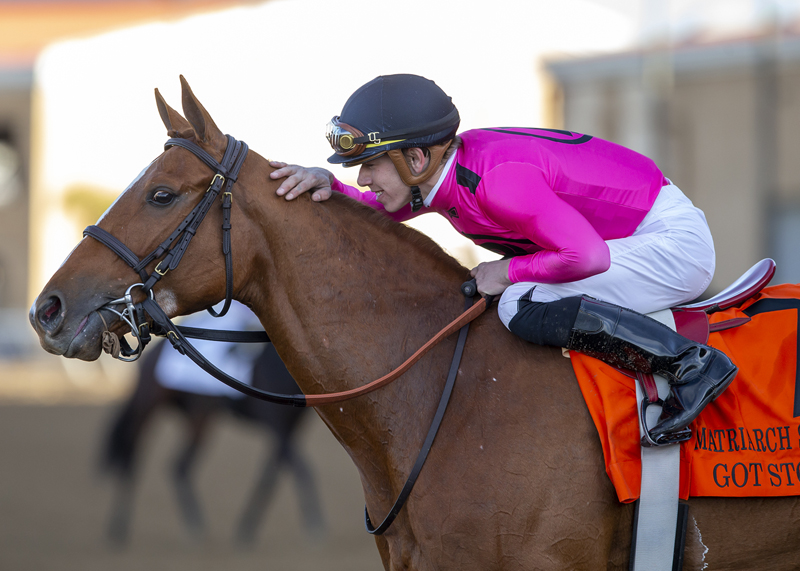 Gary Barber’s Got Stormy, the 7-5 favorite ridden by Tyler Gaffalione, strengthened her claim to year-end honors as the top female runner over grass in 2019 with an authoritative victory in the featured Grade I $300,000 Matriarch Stakes on Sunday, closing day of Del Mar’s fall Bing Crosby season.

Always well-positioned in mid-pack, Got Stormy moved powerfully into contention on the far turn, came to the outside in the stretch to assume command from Juliet Foxtrot and wasn’t seriously threatened by the fast-closing Daddy Is a Legend, winning by three-quarters of a length.

Got Stormy’s time of 1:34.24 was the fastest for the Matriarch Stakes since it was first run at Del Mar in 2014. The race previously was held at Hollywood Park.

Daddy Is a Legend, ridden by Manny Franco, was three-quarters of a length in front of third-place Juliet Foxtrot, with Toinette fourth in the field of eleven fillies and mares.

Got Stormy, a four-year-old daughter of Get Stormy trained by Mark Casse,  registered her eighth success in 18 starts and first prize of $180,000 pushed her earnings to $1,430,578. She came into the Matriarch from a second-place to Uni in the Breeders’ Cup Mile a month ago.

TYLER GAFFALIONE (Got Stormy, winner) – “Funny. I told Mark (Casse, trainer) in the paddock: ‘I think this race might set up just like the Fourstardave (at Saratoga on August 10 where she came from well back to win easily). And if it does, we’ll win.’ Sure enough, it was exactly like that race. Perfect. She just sat back there nice and relaxed and then when it came time she was gone.”

MANUEL FRANCO (Daddy Is a Legend, second) – “I got squeezed at the start and I just clipped the heels of the 10 horse (Giza Goddess) just a bit. Then I was too far back and there was too much to do. It was unfortunate.”

MARK CASSE (Got Stormy, winner) – “She’s amazing. Put her on a van, put her on a plane, she just goes wherever and runs. We kept hearing that she’d only won one Grade I, so we had to fix that. She’s been through a lot in the last month but she just keeps fighting. You don’t get a lot like her.  She’ll definitely stay in training next year.”

The stakes win was the first at Del Mar for rider Gaffalione.

The stakes win was the first of the meet and first in the Matriarch for trainer Casse. He now has eight stakes wins at Del Mar.

The winning time (1:34.24) is the fastest running of the race since it has shifted to Del Mar.