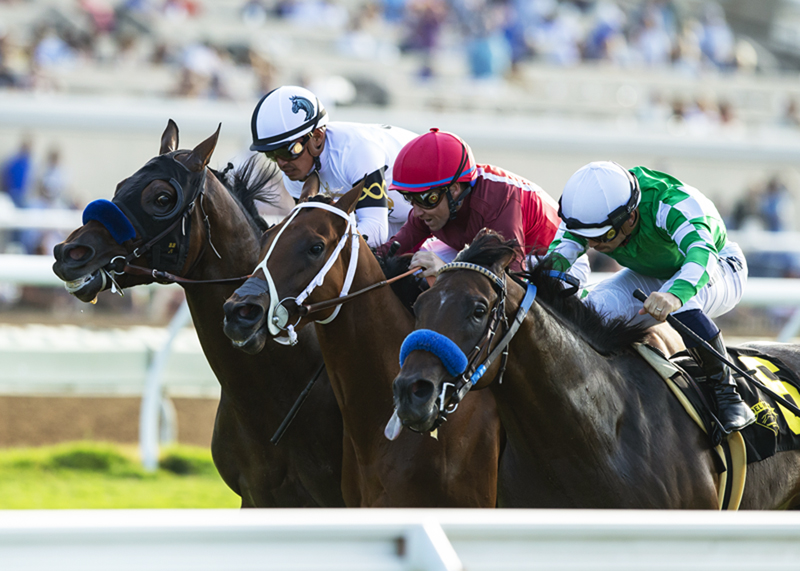 Red Baron’s Barn or Rancho Temescal’s Zoffarelli, in from England just a week earlier and unable to even get a work in over the Del Mar track, didn’t let that stop him as he ran well and survived a bumping match through the stretch to be declared the winner of the $150,500 La Jolla Handicap Sunday at the seaside racing headquarters.

The bay gelding by Zoffany actually was second across the wire just a nose behind Yuesheng Zhang’s Sword Zorro and just a head in front of Double L. Racing or Baffert’s Hudson Ridge in a furious finish.  But the track’s stewards reviewed film of the contentious stretch run where all three horses went through a series of bumps and came to the conclusion that Sword Zorro should be disqualified and placed third and the other two horses each moved up one placing.

Drayden Van Dyke rode the winner for trainer Jeff Mullins. The owners are the father and son team of Jed and Tim Cohen.

The track’s Pick Six Single Ticket Jackpot Wager proved too elusive for the 12th straight racing day meaning there will be a whopping carryover of $1,127,460 going into the return of racing Thursday. First post for the eight-race card will be 2 p.m.

DRAYDEN VAN DYKE (Zoffarelli, winner) – “If I don’t get banged that last time, I’m going to go on by and win it on my own. But he (Sword Zorro) kept constantly drifting out and out. It was the right call. I knew this horse was going to run big today. I did my homework. I was over at the barn with Jeff (trainer Mullins) the other morning watching this horse’s races in England. The owners (Red Baron’s Barn or Rancho Temescal) know what they’re doing when they go over to Europe and buy one. They got another good one here.”

JEFF MULLINS, (Zoffarelli, winner) – “I’ve only had him for eight days. No works. They worked him before he came and we just kept him happy. I wasn’t that confident (during the inquiry).  I’ve been on the wrong side of them a lot before. It (elevation to first) looked legitimate, but you never know. (Any similar off-the-plane stakes wins?) River Boyne (2018 La Jolla Handicap).”

The stakes win was the first of the meeting for rider Van Dyke and his first in the La Jolla Handicap. He now has 34 stakes wins at Del Mar.

The stakes win was the first of the meeting for trainer Mullins but his second in the La Jolla Handicap (River Boyne, 2018). He now has 21 stakes wins at Del Mar.