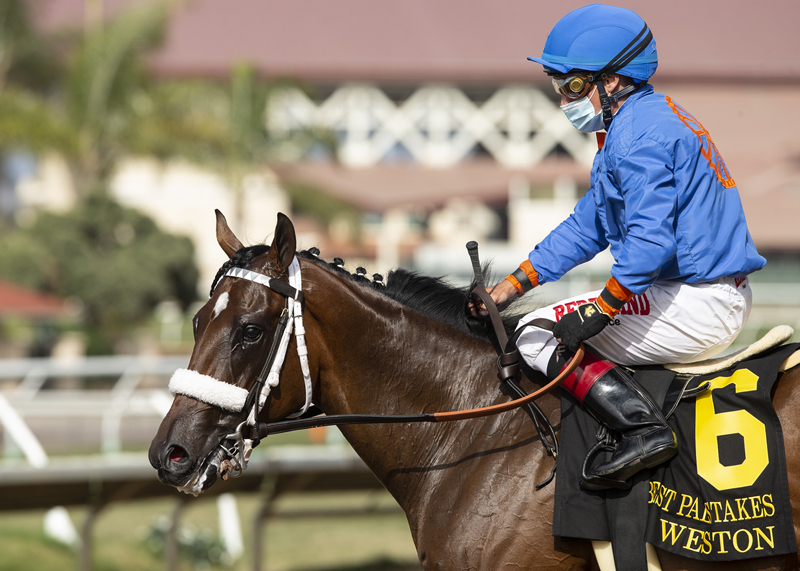 Chris Drakos and Ryan Hanson’s Weston got up in the final stride to triumph in the 50th running of the Grade II Best Pal Stakes for 2-year-olds at Del Mar Saturday.

The gelded son of the young stallion Hit It a Bomb just got the best of 32-1 longshot Girther, owned by Altamira Racing Stable. Finishing third was Reddam Racing’s Ambivalent.

The 1-2 race favorite, Breeze Easy’s Roderick, who had shipping in from New York and was coming off an impressive victory there, failed to fire in the lane and finished last of the seven runners.

Weston is trained by owner Hanson and the bay’s score was the first graded stakes win for the conditioner, as well as his first stakes victory at Del Mar.

The winner was a $7,000 yearling purchase at the Keeneland September Sale in 2019. He captured his only previous start when he flashed speed and tallied by a length and a quarter in a four and a half furlong straight maiden race at Santa Anita on June 21.

DRAYDEN VAN DYKE (Weston, winner) – “Boy, I had to work hard for that one. But I’m glad I did. I was happy to win it for (trainer) Ryan Hanson. He such a kind man and a good horse trainer. And this horse showed some class, too. Ryan told me he never got to paddock him (prior to the race), but he was just standing in there like an old pro. I knew I got there in the end and I’m real glad I did.”

RYAN HANSON (Weston, winner) – “He broke sharp, just like we wanted him to, but then it looked like he just sat there for a minute. I got a little nervous when he got shuffled back, but then he got back up there and fought on. The time was not very impressive, but that doesn’t matter. I didn’t think we were going to win it. I thought we’d be second to the Peter Miller horse, who had had a trip over the track. But I’m just really happy. We’ll see how he looks tomorrow and let him tell us what to do (regarding the $250,000, Grade I Del Mar Futurity on closing day, September 7). ”

The stakes win was the second of the meet for ride Van Dyke and his second (2018, Instagrand) in the Best Pal. He now has 32 stakes wins at Del Mar.

The stakes win was the first ever at Del Mar for trainer Hanson. It was also his first Graded stakes win.

The winning owners are Chris Drakos of Blackfoot, ID and Ryan Hanson.