Well-Matched Band of Distaffers Face Off Saturday in Kathryn Crosby 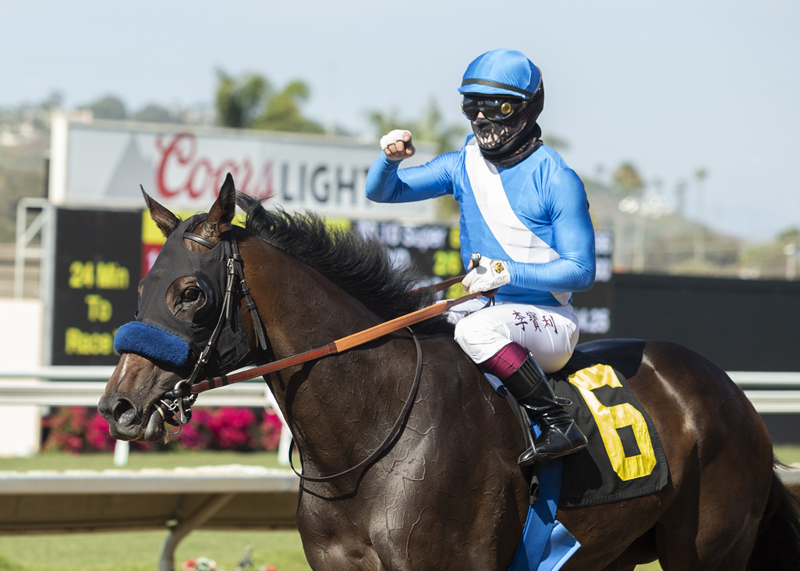 For the opening of Del Mar’s seventh fall race meeting, its racing office carded a nifty feature that drew eight fillies and mares who’ll run a mile on the turf Saturday. A handicapper might need a large crowbar to separate them all.

The Bing Crosby Season kicks off with a salute to his classy wife – Kathryn Crosby – with a stakes race named in her honor and limited to fillies and mare aged three and up. It will be offered as the seventh event on a nine-race program that is off and running at 12:30 p.m., the starting time for virtually all programs every day for the fall session.

Pick a filly or mare in this lineup and you can make a ready case why she could or should win. Morning line maker Jon White gave just the slightest of edges for favoritism to Donnie Crevier’s veteran mare Cordiality as he hung her at a lukewarm 7/2. He put Branham, Baltas or McClanahan’s Colonial Creed next at 4-1, then put a 5-1 projection on four different horses. It figures to be a tight one at the betting whickets and just as tight out on the Jimmy Durante Turf Course.

Here’s the full field for the $75,000 overnight stakes from the rail out with riders and morning line odds:

Cordiality, a 7-year-old who can still pick them up and put them down, comes into the race off a wire-to-wire tally at Santa Anita at the same distance on October 3, besting several of the rivals she’ll face Saturday. The Tim Yakteen-trained daughter of Papa Clem has 12 wins in 33 lifetime starts and sports a trio of firsts and a pair of seconds in seven Del Mar turf starts. She’s the top earner in the lineup with $620,815 in purses.

Colonial Creed races out of the barn of trainer Richard Baltas. The 4-year-old chestnut by Jimmy Creed is a steady sort who rarely misses picking up a check and has three wins and three seconds in her 10 turf starts. She was third to Cordiality, less than two lengths behind, in the October 3 race at Santa Anita.

Muchly missed to Cordiality be less than a length in the aforementioned heat. The 4-year-old British-bred by the Zafonic stallion Iffraaj is conditioned by Brit Simon Callaghan and has finished on the board in all but one of her stateside races since coming over from Europe this year.

She’s Our Charm has won three of seven-lifetime starts and comes into the race off a wire-to-wire score at Santa Anita on October 16. Hall of Famer Ron McAnally is the 4-year-old filly’s trainer and – with his wife Deborah – breeder. She’s by the high-line Kentucky stallion Candy Ride – who McAnally trained to win the 2003 Pacific Classic at Del Mar – and out of their Empire Maker mare Charm the Maker. She’s captured three of seven outs in her brief career and has the kind of speed that makes her the likely pacesetter in Saturday’s feature.