Veteran Musawaat Up By Nose in Blanket Finish at Del Mar 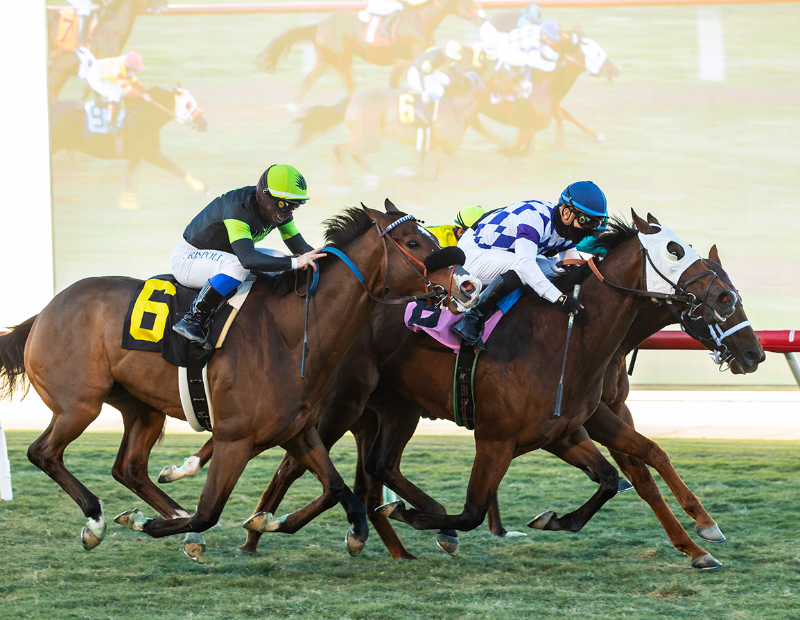 The veteran gelding Musawaat responded to a pair of blinkers for the first time in his career and a handy ride by veteran Jose Valdivia, Jr. to get up by the proverbial whisker and upset the allowance race headliner at Del Mar Friday.

The British-bred son of the French sire Equiano, who had run in Dubai as a 4- and 5-year-old before being imported to the U.S. in 2019, covered a mile and one-sixteenth on the turf in 1:42.21 to just nip favored Cali Caliente at the wire. The second-place finisher was a neck ahead of Salvator Mundi, who in turn had a neck on fourth-place finisher Murad Khan in a blanket finish.

It was the first victory of the meet for Valdivia, Jr., but the second for Musawaat’s trainer, Mike Puype.

The race carried a purse of $80,800 and rewarded Musawaat’s connections – the pair of Maher Lutfallah and Pamela Kirsch from Burbank, CA, who race under the name Bassim – with a payday of $36,600.

Trainer Peter Miller won a pair of races on Friday’s nine-race program to move in front in the meet’s conditioner standing with six wins in this, the sixth day of racing. Rider Flavien Prat also captured two firsts and now has three winners at the meet after having missed three racing days due to Breeders’ Cup commitments in Kentucky.

Racing resumes at Del Mar tomorrow with first post on the nine-race card at 12:30 p.m.