Verbal's Late Run Gets it Done in Del Mar's Cecil B. DeMille Stakes 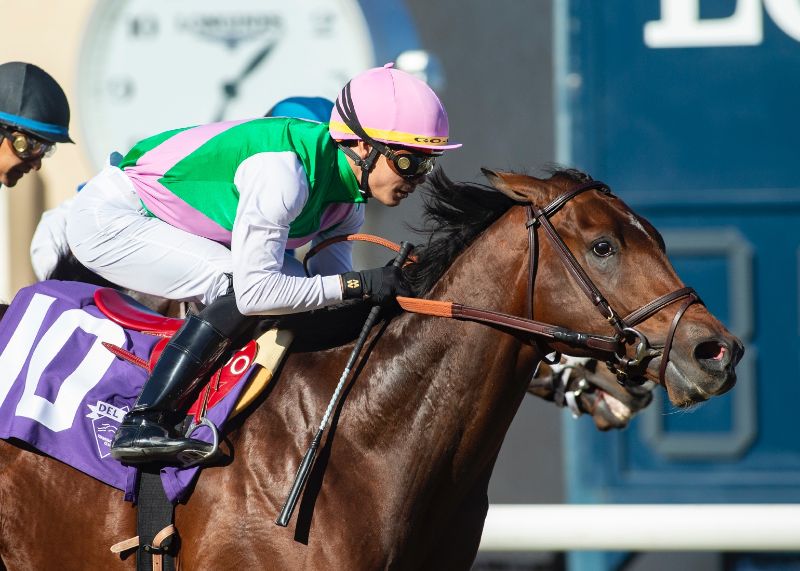 Juddmonte Farm’s Verbal took his cues smartly from Jose Ortiz and closed nicely through the lane to take down the eighth edition of the Cecil B. DeMille Stakes by a half-length at Del Mar Sunday, closing day of the seaside track’s Bing Crosby Season.

Finishing second in the turfer was Drakos or Hanson’s longshot Barsabas, who nipped Kretz Racing’s Cabo Spirit by a nose.

The DeMille was one of two graded stakes on the final card of the session. The Grade I, $400,000 Matriarch Stakes for fillies and mares is to follow.

JOSE ORTIZ (Verbal, winner) – “He won easy last time, but that was against maidens. He was running against winners today, much better horses. I knew there would be speed in the race so, even though I had the outside post, I was able to drop over and save some ground. He came running when it counted. The boss (trainer Chad Brown) knows how to spot a horse. He had it right today.”

JOSE HERNANDEZ, assistant to Chad Brown (Verbal, winner) – “I liked the way he was coming into this race, he’s been training well. It worked out like we thought. He’s got a really good turn of foot and he got there. We didn’t have much luck yesterday, but this is a really good start for today.”

The stales win was the third of the meet for rider Ortiz, but his second (Analyze It, 2017) in the Cecil B. DeMille. He now has five stakes wins at Del Mar.

The stakes win was the first of the meet for trainer Brown, but his second (Analyze It, 2017) in the Cecil B. DeMille. He now has 13 stakes wins at Del Mar.

The winning owner is Juddmonte Farms of Lexington, KY.