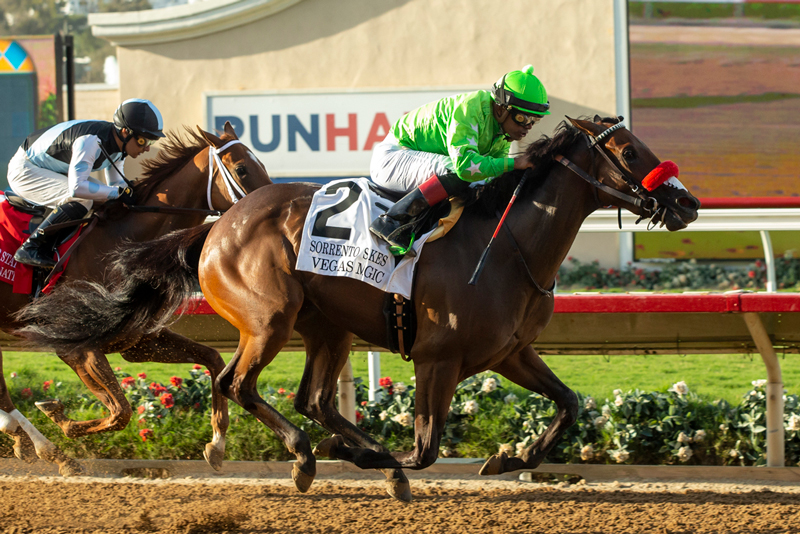 The bay filly Vegas Magic stalked the pacesetting favorite Procrastination for the majority of the six-furlong Sorrento Stakes Saturday at Del Mar, then surged past her at the sixteenth pole and went on to a length and a quarter upset in the Grade II juvenile filly headliner.

Finishing second in the sprint was Eclipse Thoroughbred Partners’ Procrastination, who had cut out all the fractions at :22.43, :45.43 and :58.29 as the race’s 7-10 favorite. Finishing third in the six-horse field was Rick or Sharon Waller’s Dazzlingdominika.

The track’s Pick Six Single Ticket Jackpot wager for the fourth day in a row wasn’t solvable meaning there will be a carryover into the pool for Sunday of $237,758.

First post Sunday at the seaside oval is 2 p.m.

ABEL CEDILLO (Vegas Magic, winner) – “I got a perfect trip. Soon as I broke with her she took me there and when I got to the stretch, when she switched leads, she just kept going. In the last eighth I’m like: ‘Oh, I’m going to get that.’ I would love to see her at one mile next time; she’d be tough.”

LEANDRO MORA, assistant to trainer Doug O’Neill (Vegas Magic, winner)-- “I expected the outside; this filly is so gutty. We were expecting her to give us a good race, she was my choice. Del Mar isn’t the perfect place for some horses. It is like Saratoga: you might bring a nice horse to Saratoga and still might not win.”

The stakes win was the second of the meet for rider Cedillo and his first in the Sorrento. He now has 13 stakes wins at Del Mar.

The stakes win was the first of the meet for trainer O’Neill, but his third in the Sorrento. He now has 43 stakes wins at Del Mar.