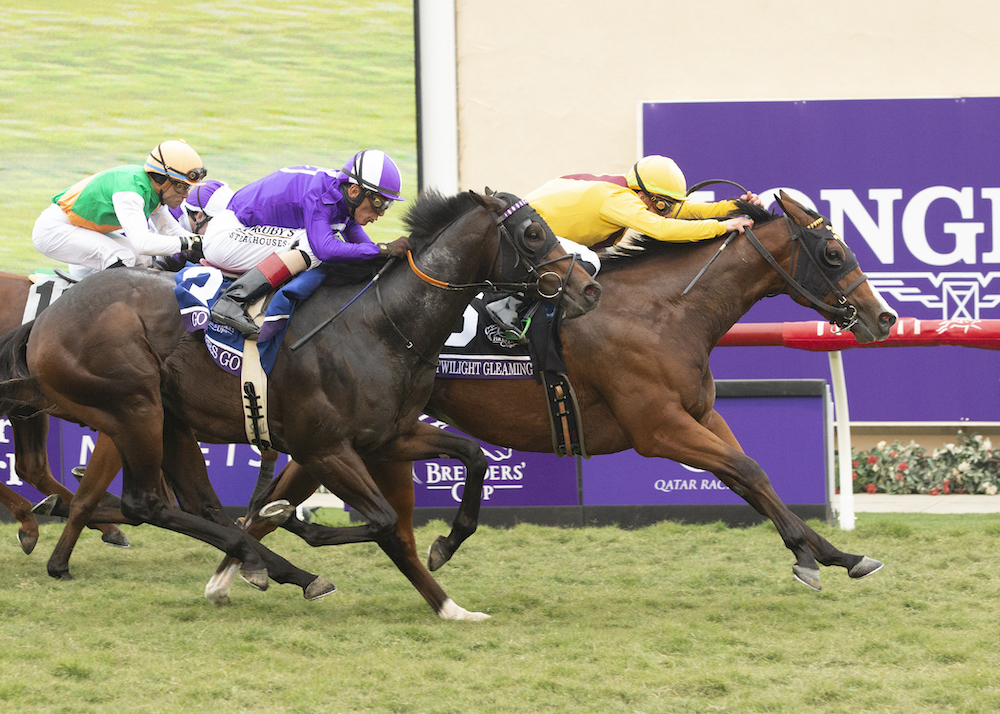 Stonestreet Stables’ Twilight Gleaming (IRE) ($12.40) was quickest out of the gate and led all the way to win the fourth running of the $1 million Breeders’ Cup Turf Sprint (G2) for 2-year-olds by a half-length over Go Bears Go (IRE) to kick off the 38th Breeders’ Cup World Championships Friday afternoon at Del Mar.

Trained by Wesley Ward and ridden by Irad Ortiz Jr., Twilight Gleaming covered the 5 furlongs on a firm Jimmy Durante Turf Course in :56.24. The victory completed a hat trick in the race for Ward and Ortiz who combined to win this race in 2019 with Four Wheel Drive and 2020 with Golden Pal.

It is the fifth Breeders’ Cup victory for Ward and the 12th for Ortiz.

Twilight Gleaming is a daughter of National Defense (GB) out of the Dansili (GB) mare Thames Pageant (GB).

Winning Trainer Wesley Ward (Twilight Gleaming) – “I was really confident in this filly. I feel bad for the other two owners because we are all trying to win, but this filly, she had good spacing from her win in France and every work at Keeneland just kept getting better and better. She was coming into it just fresh and fit and ready to go and she did it.

“And, I’m not just saying this because she’s Barbara Banke, but Barbara has been a loyal supporter of ours and she really got the itch to go over to England. We got some good horses and Ben McElroy got this filly for her and we bought some others for next year to go to Ascot with and I’m excited to see those. She’s just such a great lady and she loves the sport. We are really excited.

On Kaufymaker, second – “She ran great.”

On Avery Jane, fifth as favorite – “It didn’t look like she got ahold of the track the first part.”

Trainer Dave Loughnane (second with Go Bears Go) – “I’m a bit emotional really, he’s a superstar. He’s been life changing for us. He just sat in the gates for half a stride which might have cost him the race but I can’t be disappointed. I’m very proud of the horse and all the team at home. Johnny (Velazquez) gave him a super ride and on another day he might have won. It’s a massive day for my career.”

Jockey John Velazquez (second with Go Bears Go) – “He ran a great race. A little better break and we would have won it. I thought for one second we were going to get it. I wanted to be a bit closer earlier which has cost him but he’s run very well.”

Jockey Jose Ortiz (third with Kaufymaker) – “She ran very good. I made the wrong choice at the top of the lane and I decided to go outside and follow Tyler (Gaffalione). I probably should have stayed inside. It was tight on the inside though. In the end, I was happy and she responded well.”

Jockey Tyler Gaffalione (fifth with favorite Averly Jane) – “She broke sharp but she just didn’t really get it going. I looked to my inside and outside and I was already getting outrun. She wasn’t grabbing the bit on me so I dropped my hands to see if she will take me a little bit. She did but she just didn’t have it today.”