Tripoli Voted 2021 Horse of the Meeting 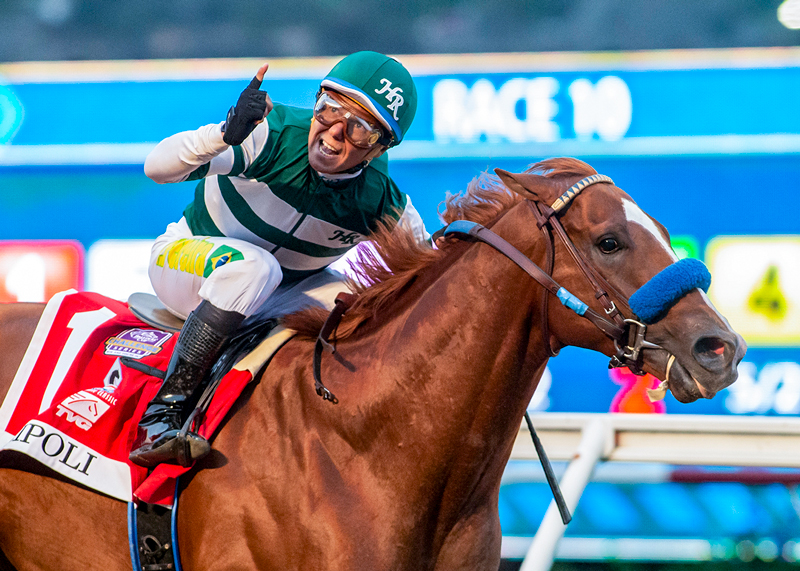 A victory in the 31st running of the TVG Pacific Classic propelled Tripoli to honors as Horse of the Meeting and top older horse for the 2021 season at Del Mar in a vote of the media.

Trained by John Sadler for Hronis Racing, Tripoli, a 4-year-old chestnut son of Kitten’s Joy, followed a runner-up effort in the San Diego Handicap – beaten a half-length by Express Train – with a 1 ¼-length victory in the $1 million signature event of the summer “where the turf meets the surf.”

The win was the third in the last four years for the Hronis/Sadler combination and carried with it a guaranteed spot in the $6 million Breeders’ Cup Classic when racing’s fall championship event makes its second visit to Del Mar on November 5-6.

The media voters in the annual poll were in unanimous agreement only on Going Global, winner of the Grade I, $300,000 Del Mar Oaks as the top 3-year-old filly of the meeting.

Dr. Schivel’s win in the six-furlong, Grade I, $300,000 Bing Crosby barely held sway over Ginobili’s in the seven-furlong, Grade II Pat O’Brien with one vote going to the flashy 3-year-old colt Flightline after a scintillating six-furlong allowance win on the penultimate day of the meeting.

And in the top 3-year-old division, None Above The Law, with wins in the Real Good Deal and the Grade II, $250,000 Del Mar Derby edged Shared Belief champion Medina Spirit with one vote going to the aforementioned Flightline.

Shedaresthedevil, shipped in by Brad Cox, second only to Steve Asmussen in the national trainer standings, won the Grade I, $300,000 Clement L Hirsch Stakes and was solidly voted the top older filly or mare.