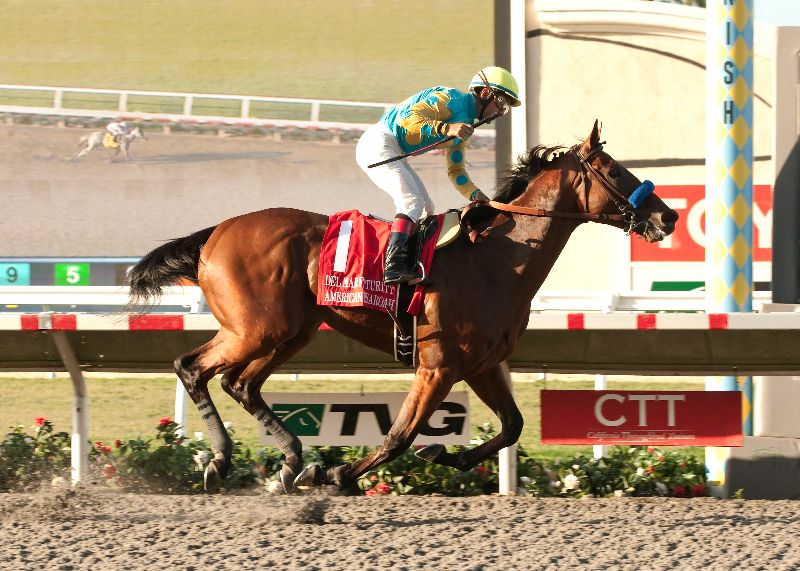 American Pharoah and Victor Espinoza pulling away in the Del Mar Futurity September 3, 2014.
Triple Crown champion American Pharoah will parade for Del Mar racing fans between races Sunday, the next-to-last day of the track’s 40-day summer meeting.
The handsome, bay 3-year-old, a winner of eight of 10 starts and nearly $6-million in purses, will bid farewell to the racetrack where he started his career last summer, highlighted then by a smashing victory in the Del Mar Futurity.
Track officials and the “Pharoah” connections – owner Ahmed Zayat, trainer Bob Baffert and jockey Victor Espinoza – are working out the specifics of the colt’s appearance, but it is expected to be early on during an afternoon that will feature three stakes races topped by the $250,000 Del Mar Derby, as well as a major post-race concert by the popular band Weezer.
As part of the Sunday festivities, Del Mar will partner with TVG to offer 10,000 American Pharoah posters to those with paid admission while the supply lasts.
“We’re delighted and excited to allow our always enthusiastic fans an opportunity to see a racing hero,” said Del Mar Thoroughbred Club president and CEO Joe Harper. “American Pharoah started at Del Mar last year and has returned to be with us again this summer.  We’re tickled that his people want to offer a salute to our loyal fans before they take their remarkable show on the road again.”
The Kentucky-bred son of Pioneerof the Nile set the racing world afire this spring when he swept the Triple Crown races, the first time a horse had turned that Derby-Preakness-Belmont trick in 37 years. Subsequently, he used Del Mar as a training base for an impressive victory in the Haskell Invitational at Monmouth Park in New Jersey on August 2, then for a game second-place finish in this past weekend’s Travers Stakes at Saratoga. During his remarkable run, “Pharoah” captured seven Grade I stakes and banked earnings of $5,900,300.
All of his victories were accomplished with rider Victor Espinoza aboard. The 43-year-old native of Mexico City preceded his Triple Crown achievement this season with an outstanding run last year as the chief pilot for the sensational California Chrome, the flashy chestnut who won the Derby and the Preakness and four other races – including Del Mar’s Hollywood Derby on grass -- en route to the title of 2014 Horse of the Year.
Though long-term arrangements have been made for American Pharoah to begin his stallion career in 2016 at Ashford Stud in Kentucky, the colt’s immediate future is currently in doubt. His connections are weighing the possibility of retiring him now against the thought of running him once more in the $5-million Breeders’ Cup Classic on October 31 at Keeneland Race Course in Kentucky.  Should his retirement be the decision, his Del Mar appearance might serve as a racing farewell for the 2014 Male Juvenile Eclipse Award winner and current favorite for additional championship honors this season.
Del Mar’s 10-race Sunday program will have a first post of 2 p.m.