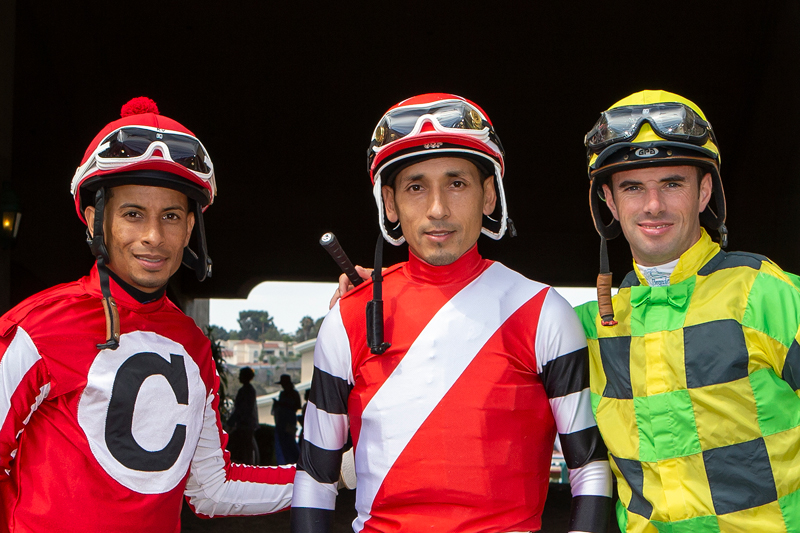 This racing season the Del Mar Thoroughbred Club has taken a page from a Hollywood script with its own version of the 1986 movie comedy, “The Three Amigos.”

Replacing actors Steve Martin, Chevy Chase and Martin Short are Florent Geroux, Ramon Vazquez and Hector Berrios. But don’t expect any laughs in this account. Because the three replacements are in the serious business of riding horses at the seaside track for their first full seasons in hopes of making off with a good share of the loot Del Mar is offering by way of its husky purses.

And unlike in the film version, there are no bumblers in this bunch.

In fact, their eyes are on the finish lines each time they get astride their equine partners in these ever-moving classics. Geroux, sitting seventh on the national list of top moneymakers with more than $9 million in earnings heading into the Del Mar meeting, seems like a natural leader of the group. But so far, he hasn’t found his best footing in the meet’s early going. (The fact that he and his agent, Doug Bredar, didn’t declare their Del Mar intentions until after the first condition book was out – and the many riding deals that were already struck because of it – had a fair bit to do with it.) That hasn’t deterred him, though he did say after the first seven days of racing netted him only one winner: “I have to start bringing in some winners.”

His history indicates that probably is something that is reasonably close at hand. The good horses will be coming his way and he will begin grooving in on the track. Del Mar isn’t altogether new for the 36-year-old native of France, he says, adding “I have come in here several times in the past to ride special races.” One of those races netted him the rich Breeders’ Classic aboard Gun Runner in 2017.

Little wonder, then, that Del Mar holds a special place in Geroux’s pantheon of super racing venues. Did the rider normally based in the Midwest come to Del Mar because Southern California’s premier rider in recent years, Flavien Prat (another Frenchman), moved his tack to the east coast, thus opening up many opportunities? “Not really,” he said. “The timing was right and I just wanted to try something different.”

And, of course, he added: “Good horses, good purses and good weather.”

Will he stay in Southern California if the racing proves beneficial and profitable? “You never know,” he said cagily. “I’m excited to be here, but it’s likely I’ll return to Kentucky to ride after this meeting,” referencing the October Keeneland meet and the Breeders’ Cup there on the first weekend in November.

The native of Puerto Rico graduated in 2002 from the famous jockey school in his homeland and began his racing career there.  He moved on to the United States in 2011 starting at Delaware Park. He has moved his tack several times since and has been a leading rider at Remington Park in Oklahoma, Iowa’s Prairie Meadows, and at Oaklawn Park in Hot Springs, Arkansas. Most recently, he led the standing at the Los Alamitos meet that preceded Del Mar.

Of his time so far at Del Mar, Vazquez said, “This is an incredible opportunity. Everyone has been very supportive and the horses are running well.” That’s reflected in his purse earnings and his high rate of finishing in the top three places in his races.

Top local winner for Vazquez so far is Heywoods Beach, victor for trainer John Sadler in the track’s Cougar II Stakes on the season’s opening Sunday.

He and his agent, William Castle, are hoping the Del Mar meeting will be a breakout time for the 38-year-old. They’ve decided this is the ultimate test of whether he stays in the west or returns to some of his earlier haunts.

Vazquez is quite the family man, making a home locally for him and his wife, three children and his mother as he moves ahead on his quest for a new racing venue.

Berrios, at 35, has been in the United States since 2019 and his journey to Del Mar was stoked by a longtime interest in the track and its surroundings as well as the knowledge that one of his prime supporters at Gulfstream Park, Amador Sanchez, planned on bringing a string of horses to the seaside venue. Those two factors, he said, “made the decision to come out here easy.”

The native of Santiago, Chile made an immediate impact on Del Mar fans and trainers by winning the Wickerr Stakes aboard the Marcelo Polanco-trained Irideo, a 6-year-old who paid his backers a whopping $65 on the meeting’s first weekend. Berrios picked up another winner on the second weekend to post two victories over the first seven racing days.

The rider, who has been in action at Gulfstream in Florida, has embraced trainers in Southern California and says he’s hopeful of making this his primary racing home. “I want to live and work here from now on,” he said. “I am grateful for the excellent support I have received and the excellent chance with the horse in the Wickerr and I made the most of it.”

The welcoming by the trainers at Del Mar means he’s got lots to do during morning workouts. “I get on a lot of horses in the mornings and that keeps me busy,” he says.

He’s hopeful that his busy mornings will turn into busy afternoons.