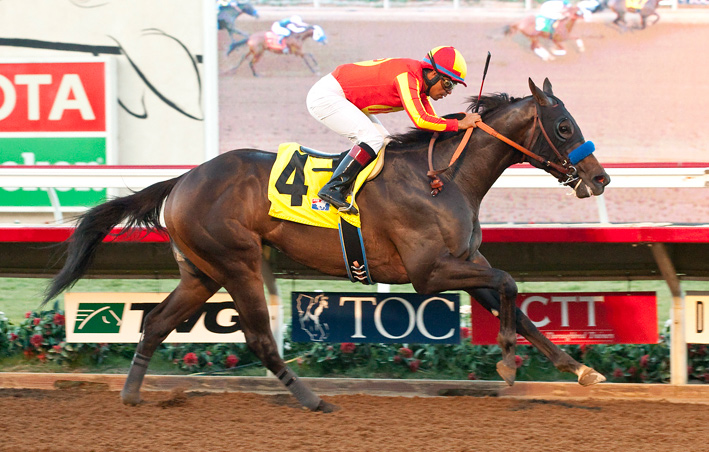 Toews On Ice ©Benoit Photo
Sent postward the 4-5 favorite, Toews On Ice demonstrated his gameness as he came back from being passed entering the  stretch by Mac Daddy Mac to win the featured Grade III $100,000 Bob Hope Stakes Saturday at Del Mar.
Toews On Ice responded to the hard urging of regular rider Martin Garcia to outfinish Mac Daddy Mac, the 4-1 second choice under Gary Stevens, in the final furlong and win by a length and one-quarter. The two had dueled from the outset of the seven-furlong sprint with the favorite proving best at the end.
I’malreadythere, a 16-1 outsider under Tyler Baze, was third, three and one-quarters behind the runner-up and a half-length ahead of Dr. Dorr in the field of seven two-year-olds.
Toews On Ice, a son of Archarcharch owned by the partnership of Pegram, Watson and Weitman and trained by Bob Baffert, accomplished the distance in a solid 1:22.27 as he won his third race in five starts. Previously, he won the Barretts Juvenile at Los Alamitos and the Speakeasy Stakes at Santa Anita. First money of $60,000 increased the bay colt’s earnings to $175,200.
Toews On Ice returned $3.80, $2.80 and $2.20; Mac Daddy Mac paid $3.80 and $3, while I’malreadythere returned $4.80.
For the second consecutive afternoon, there were no perfect tickets in the Pick Six. Consequently, Sunday’s program will feature a carryover of $230,699. Post time for the first race is 12:30 with the Pick Six conducted on races four through nine.
Garcia was one of three jockeys who had doubles on the afternoon. Garcia won his second race on the program when he took the ninth and final aboard the Baffert-trained Drefong.  Also doubling were apprentice David C. Lopez who won the second on Q’ Viva and the fourth aboard Radiant Journey and leading rider Santiago Gonzalez who nabbed the third on Take It Easyplease and the fifth astride Love De Car.
MARTIN GARCIA (Toews On Ice, winner) – “Tougher race for him today, but he responded. That other horse (Mac Daddy Mac) got in front of him in the stretch for a little bit, but he dug in and went and got him. Changed his leads perfectly.  He’s been a little green, but he did real well today. He’s a nice horse.”
GARY STEVENS (Mac Daddy Mac, second) – “Good effort for the colt; big race for him. He only had the one start and he gets stretched out from five and a half (furlongs) to seven. He responded well. He’s talented and he’s game. I know his people are happy with his effort. Good race.”
TYLER BAZE (I’malreadythere, third) – Good trip; good try. He wants more ground. Give him more ground and he’ll be in business.”
JIM BARNES, assistant to Bob Baffert (Toews On Ice, winner) – “You’re always worried when a horse gets headed like he did. But it looked like Martin (Garcia) was just cruising and he responded when he had to. He’d been doing this thing where he would switch leads if you hit him aggressively, so Martin had to ride him with a little more finesse and the horse changed on his own. Martin did a good job. You want to see a horse come back like he did. It was gratifying.”
FRACTIONS:    :22.84  :45.85  1:09.69  1:22.27
This is the second running of the Bob Hope at Del Mar. It was formerly known as the Hollywood Prevue Stakes and had been run at Hollywood Park 33 times.
The stakes win is the second of the meet for rider Garcia and his 24th overall at Del Mar.
The stakes win is the first of the meet for trainer Baffert, but his 112th at Del Mar, the most of any trainer. Baffert was in Tucson (AZ) Saturday where he’ll be honored this evening at halftime of the University of Arizona – University of Utah football game for his Triple Crown accomplishment. He is a graduate of Arizona in their Racetrack Industry Program.
The winner is owned by Mike Pegram of Scottsdale (AZ), Mt. Vernon (WA) and Del Mar, along with Karl Watson and Paul Weitman of Tucson (AZ)