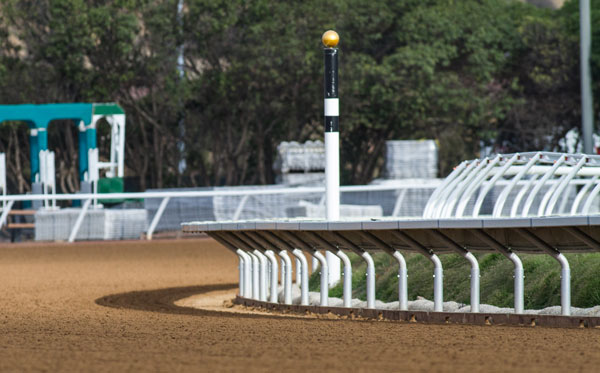 © Zoe Metz Photography
So we’re going to talk about “The Poles.”
No, not Lech Walesa, Coach K or Wild Nights in Warsaw. These are the ones that surround a racetrack, the silent sentinels that provide the benchmarks for man and beast as they journey around any of the many ovals employed by those in the racing game.
The key to The Poles is the furlong, a combination of two old English words based on an English farmer’s measuring term (furh for furrow and lang for long) equating to an eighth of a mile, or 660 feet, or 220 yards (or 40 rods or 10 chains, but let’s not go there). Most major racetracks in North America are one mile in circumference, meaning they also can be measured at eight furlongs. Logically enough, there are eight furlong poles positioned equally around those tracks.
Those furlong poles -- or eighth poles – are, by general agreement (the Association of Racing Commissioners International has taken the lead on this with a set of model rules), painted with green and white horizontal stripes. Additionally, though, Del Mar’s one-mile track is further broken down into half furlongs, or sixteenths (110 yards, or an American football field and one end zone), where those poles are all painted with black and white horizontal stripes. Then, finally, there are markers at the quarter mile junctures (quarter pole, half-mile pole, six-furlong pole) that are all painted with red and white horizontal stripes.
If you’re looking at a theoretical racetrack – or if you’re simply looking at Del Mar – you can easily see and understand The Poles if you start at the finish line and go backwards. That’s the key to comprehending how they work:  all references to The Poles are based on the finish line. (The Sixteenth Pole is a sixteenth of a mile from the finish; the Eighth Pole is one-eighth of a mile from the finish, and so on.)
With that bit of knowledge in the bank, here’s how folks involved the most with using The Poles actually do it.
Start in the morning – during training hours – where most everything to do with racing in the afternoon begins. The pole expert here is Millie Ball, a lifetime horsewoman who for more than 10 years exercised horses in Southern California for trainers like Hall of Famers Bobby Frankel and Bob Baffert, as well as her husband, Tim Yakteen.
“When you’re getting instruction for exercising a horse in the mornings,” Ball says, “the poles are the marking points. They are the X on your map of the racetrack. A trainer might say ‘Back him up to the quarter pole and…’  That’s your starting point in other words. You’ll go the wrong way (clockwise) on the outside (of the track) to that point, then turn him around and begin.
“When it comes to the sixteenth poles, you identify them by their proper names to start – the sixteenth, the three-sixteenths, the five-sixteenths. But after that you go to halves, based on the furlong poles – the 4 1/2, the 5 1/2, the 6 1/2 and so on.

“The furlong poles are how you can tell how quickly you’re going. After you’ve been at it for a while and you’ve built up some experience, you can basically start counting seconds between the (furlong) poles to judge your speed. You’re probably going to want to count to 12 between poles in order to get it right for most works. It’s that thing about having a clock in your head. That’s how a lot of riders do it.”
A couple of Hall of Fame riders – Kent Desormeaux and Mike Smith – offered takes on how the poles work for them in the afternoon during races.
“The key poles for me on the racetrack start at the green pole on the last turn – the three-eighths pole,” the ebullient Desormeaux said. “That’s the point where you want to ask your horse to pick it up some; let him know it’s time to get serious. Then when you hit the (red) quarter pole, now you’re going for it. Most all horses, especially the good horses, have a good quarter mile run in them. You can ask them for it there. If you’ve had to use some of it before then, you’re probably going to be in trouble. My job is to find my horse’s best high-cruising speed throughout the race and keep them there. Then when we get to the quarter pole, we’re going for it.”
Mike Smith, one of the great pace riders of all time, says knowing your poles can be what it’s all about.
“Horses get trained by poles,” he notes. “They take them from a certain pole to the finish line, then the next pole to the finish line. You’ve got to get a feel for them and what they can do and the poles can help tell you. Some horses will have a good quarter mile in them; some only have an eighth; some even less. Most horses will give it to you for a quarter mile. Sometimes you’ll have a good one that only has an eighth (of a mile) in them, but it can be a really devastating eighth. You’ve got to find out what they’ve got and use it. If you get there (finish first), you’ve probably done it right. If not, well….
“Here in the States our pole colors are the same. Not so in Europe. You go over there and you’ve got to know your courses. You’ve got to walk the grounds. You can have one-mile straights on some of those courses. You can get fooled here, too, with a place like Belmont (Park). You’ve got a mile and a half track there and the poles are way different. The six-furlong pole is where the half-mile (pole) is at other tracks. You turn for home and can think you’re at the quarter (pole), but you’re not. You better know your poles at a place like that.”
Yet another fellow who zeroes in on The Poles is the maestro of the announcer’s booth, Trevor Denman. Now in his 32nd year calling races at Del Mar, in Southern California and beyond, the South African transplant uses the poles to key a fair portion of his race calling.
“The poles mean so much to the race; it’s where everything happens,” he says. “Let’s suppose they’re running a mile: They jump out at the start and work their way to the three-quarter pole. Now the jockeys have their position – they’re all settled in – and you can see what tempo they’re going. At the half-mile (pole) you’re looking for developments -- you’ll see if someone is going to turn up the pressure; maybe they think they (the leaders) are going too slow. And then, of course, the big one is the quarter pole. That’s where all the action happens. You can see with some of those horses that the jocks normally let them go just when they’re coming to the quarter pole. If they open up there and they’re strong, you’re not going to catch them. But by the same token, if they’re on the lead and they start getting weary, the quarter pole is the one that’s going to find them out. You can almost tell at the quarter pole whether they’re going to run on or not. And then there’s the sixteenth pole. That’s where it gets tight. If the guy on the lead has a tired horse, he’s begging for that sixteenth to come.
“I try to reference the poles in my calls. The half-mile pole, the quarter pole, the eighth pole. Sometimes the eighth can be everything. When you’re visualizing the race and you say ‘He’s at the eighth pole and he’s hanging on,’ you know you’ve got to sweat it. But if you say ‘They’re at the eighth pole and so and so is flying,’ then you’re looking awfully good. It’s all about the poles.” 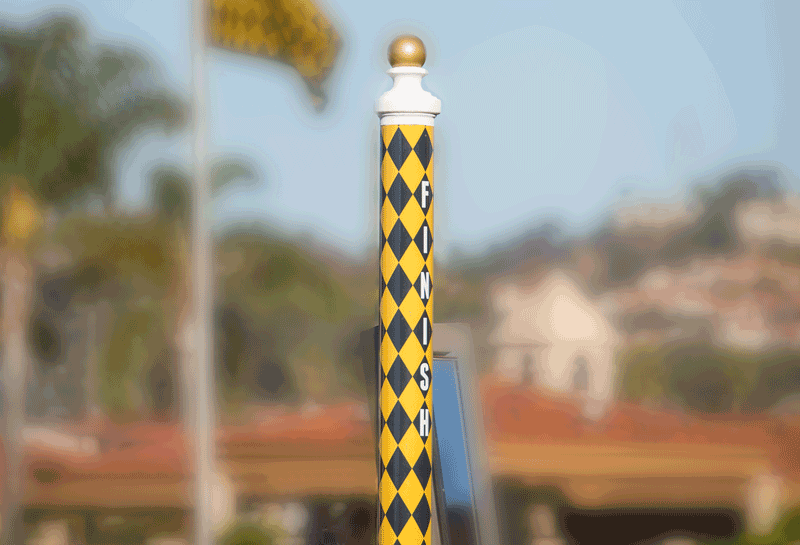 And lest we forget, there’s yet another pole on the racetrack that really hasn’t been mentioned yet, and most will tell you it is the most important one of all.
Our morning exercise rider speaks to it.
“Then, of course, you’ve got the mile pole, or the finish line,” says Millie Ball. “We don’t call it the mile pole, though. It’s ‘the wire.’ A trainer might say ‘Work him from the five (furlong pole) to the wire.’ In other words, it’s going to be a five-furlong work.”
Rider Desormeaux knows about that pole, too.
“Let’s not forget that other pole – the one at the finish line,” he says. “It’s a very important one, especially in the afternoons. When you get right down to it, it’s probably the most important pole of all.”