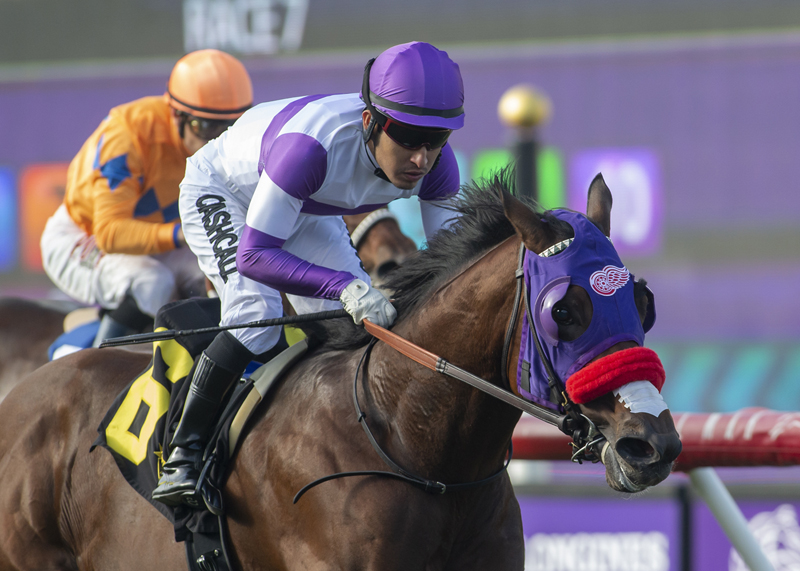 Reddam Racing’s bay colt Team Merchants fired a good shot through the lane Thursday at Del Mar and came away a handy length and a half winner in the $108,750 Let It Ride Stakes

The victor is a product of Reddam Racing’s history being by J. Paul Reddam’s Kentucky Derby winner Nyquist and out of Edwina, a daughter of Reddam’s sire Square Eddie. Reddam, of nearby Laguna Beach, has been a solid force in Southern California racing and breeding for two decades.

Team Merchants was ridden by Mario Gutierrez and is trained by Doug O’Neill. He ran the one mile on grass in 1:34.42 and apparently benefitted from a change of equipment that saw him put blinkers on.

Finishing second was Farfellow Farm’s Nerves of Steel, who had a length and three quarters on Jay and Julie Manoogian’s Coulthard.

Racing will resume at Del Mar tomorrow with the first day of the two-day Breeders’ Cup Championships. There will be 10 races offered with five of them Breeders’ Cup events. First post will be 11:55 a.m.

MARIO GUITERREZ – “He settled today. We have been working to get him to settle and he did well today. The blinkers had to help, too. He was having issues being focused, especially in the stretch, but today that was no problem. He ran well on the grass today, but I think he runs just as well on the dirt. He’s a nice horse.”

DOUG O’NEILL (Team Merchants, winner) “Mario (jockey Mario Gutierrez) mentioned after his last that maybe we should put a set of blinkers on him and I think, well obviously, it helped him a little bit. The distance and the turf –two turns on the grass – was nice, but I’m going to give the blinkers a little love there too.”

The stakes win was the first of the meet for rider Guiterrez and his first in the Let It Ride. He now has 17 stakes wins at Del Mar.

The stakes win was the first of the meet for trainer O’Neill and his first in the Let It Ride. He now has 41 stakes wins at Del Mar.

The winning owner and breeder is J. Paul Reddam of Laguna Beach, CA.