Summertime Blues? Not For Summer Intern Class of 2021 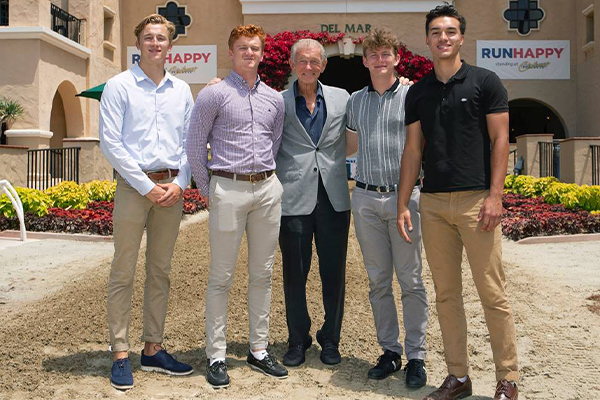 They are four students representing three universities – Syracuse in the East, Wisconsin in the Midwest and Arizona in the Southwest.

Like all their peers, they’ve endured an academic-year-plus under the unique circumstances predicated by the COVID-19 pandemic. But now, they’re out in the Southern California sunshine as the 45th group of Del Mar Thoroughbred Club summer interns since the program was started in 1977. They’re the group that re-starts a program that was, like many others, discontinued in 2020 due to COVID restrictions.

Let’s go by school, from East to West, and learn a little more about them.

Whit Ellis, 20, from Petaluma, and Joey Bottini, 20, from Phoenix are headed into their senior and junior years, respectively, at Syracuse. They’re fraternity brothers at Delta Kappa Epsilon. Ellis is majoring in sports business management, Bottini is in the Newhouse School of Communication with studies encompassing TV, radio and management and technology. They’re the first Orangemen to intern at Del Mar, making Syracuse the 32nd university to be represented.

They both spent a lot of time at the castle-like DKE house off campus during the COVID situation and have mixed feelings about the experience.

“School had us pretty much locked down, but it was better off campus than on,” Bottini said. “They were really strict in the dorms, but at least we were able to see our friends and have some fun. It felt like it took away a year from us with no sports or games to go to – which are a huge part of school pride – and not being able to be on our really beautiful campus.”

Ellis’ plans to study abroad for his junior year were scuttled, as was the 2020 internship that was in the works here. When Bottini heard that Ellis’ internship was reinstated for this summer -- at an elite, sports-related place – he took a “shot in the dark” and started networking. He was informed in mid-June of a late opening that he filled.

Ellis’ family and the one of Craig Dado, DMTC vice president, marketing and chief marketing officer, are longtime neighbors and acquaintances in Petaluma in the Bay Area, but Whit’s previous exposure to racing consisted mainly of once-a-year trips to the Sonoma County Fair.

“This place is massive, it’s like a maze,” Ellis said, a few days into the internship. “And there’s something going on everywhere. I’m well aware it’s a unique opportunity. Most people don’t get an opportunity to do something like this and learn the ins and outs of a place like this.”

Jake Rome, 20, from Irvine, is headed for his junior year at Wisconsin, a journalism and communication arts major. Wisconsin thus becomes the 33rd school to produce a Del Mar intern.

Rome spent most of 2020 in a Madison apartment with roommates and described the routine as: “Schoolwork during the day, maybe a few friends we felt safe with over at night.

“It wasn’t the worst thing in the world, not the most negative. I had a lot of time with myself and I had to grow up a little bit quicker. I’d rather not sit in front of my laptop for 12 hours a day and learn by computer. I don’t think it’s the most effective way for me or a lot of other people to learn.

“But I understand it’s what we needed to do.”

Jake is the son of nationally renowned radion and TV sports talk show host Jim Rome. The senior Rome had Thoroughbred ownership success with two-time Breeders’ Cup Turf Sprint winner Mizdirection, as well as Shared Belief, an Eclipse Award winner as 2-year-old male champion in 2013 and the $1 million TVG Pacific Classic in 2014. Jim Rome is a member of the DMTC Board of Directors.

Jake was in more than few winner’s circle pictures after big races from the early elementary to junior high school years, but the memories – even of the Pacific Classic – are not vivid.

“I knew it was a big race, he was a great horse and my dad got to hold up a big trophy,” Jake said. “But I was a little too young to fully process everything and back then I didn’t like horse racing as much as I do now.”

Jake might following in his father’s footsteps, but possibly along a different path.

“I’m interested in working in TV, but not necessarily in sports, which always comes as a bit of a shock to people,” he said. “I’m more into news and pop culture … but I think I can transfer whatever I learn here to whatever I do later on.

“I didn’t expect too much coming in. I knew I had landed a phenomenal gig, but I didn’t think I’d fall in love with the track and all the people around it as much as I have.”

Diego Diaz-Colwell, 21, from Phoenix, will be a junior at the University of Arizona. His school-in-the-time-of-COVID experience was similar to the others with one exception.

“I had COVID in the month of September,” he said. “It hit me pretty hard. But now I’m fully vaccinated and looking to move on, so I can’t complain.”

For Diaz-Colwell, the internship figures to be part of a transition from basketball, which he played well, to a career that may or may not touch on the world of sports.

A point guard, Diaz-Colwell was on the varsity roster at Corona Del Sol High in Tempe, Arizona for 2 ½ years during a 2012-2015 run during which the school won four straight state championships, was Top-10 ranked nationally and sent a dozen or so players on to the NCAA Division I ranks.

There, and at subsequent stops at a prep school and Pima Community College, Diaz-Colwell played with, as back-up to, or against NBA-bound Marvin Bagley (Sacramento Kings) and Saben Lee (Detroit Pistons) among others.

“It was a nice journey, but it’s over for now,” he said. “I still play basketball, but just for fun. I’m a business major and I probably will go for something in sports, but for now (the focus) is on business and marketing in general.”

Horse racing is, for Diaz-Colwell, a whole new ballgame.

“I love sports, but I’ve been so wrapped up in playing that I didn’t develop a wide interest outside of basketball,” he said. “(Horse racing) is new for me, like it is for a lot of the younger generation, but from what I’ve seen here so far, I like it.”

The strongest connection to horse racing for Diaz-Colwell before now can be found a few branches up on the maternal side of his family tree. He is the great grandson of acclaimed actor Anthony Quinn and Katherine DeMille.

Which makes him a second cousin to DMTC CEO Joe Harper, the grandson of legendary director and producer Cecil B. DeMille.