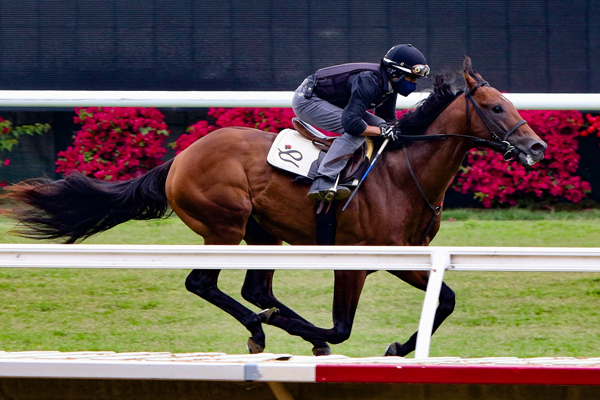 Eight 3-year-olds will test their mettle over a mile and one-sixteenth Sunday on the Del Mar greensward in the 80th edition of the La Jolla Handicap. The Grade III stakes carries a purse of $125,000.

In an interesting move by the connections of 2019’s 2-year-old champion Storm the Court, the Court Vision colt will try the turf for the first time in his career as he looks for a new way to go after a series of less-than-stellar efforts on the main track this year.

Storm the Court, owned by the Exline-Border Racing partnership of Ryan Exline and Justin Border, as well as David Bernsen and partners, has $1,285,451 already on his ledger to go along with the Eclipse Award. But Sunday he’ll try to break an 0-for-4 streak in 2020 that saw him get close without getting the cigar in a series of stakes around the country. Trainer Peter Eurton will give leading rider Flavien Prat a leg up for the La Jolla, which is the final prep race leading to the track’s top 3-year-old offering, the Grade II, $200,000 Del Mar Derby on Sunday, September 6.

Here’s the field for the La Jolla from the rail out with riders and morning line odds:

Smooth Like Strait appears to be the speed and a serious threat in the La Jolla. The Midnight Lute colt has won three races on the lawn, two of them stakes. He took the one mile Cecil B. DeMille at Del Mar last December and most recently captured the War Chant Stakes at Churchill Downs on May 23. Mike McCarthy trains the bay Kentucky-bred and has put his charge through a solid series of morning drills for this effort.

Azul Coast will have his backers in the headliner if for no other reason than his highly successful trio of owners and his Hall of Fame trainer in Bob Baffert. The $320,000 yearling buy captured the El Camino Real Derby at Golden Gate Fields in February and tried his hand in the Santa Anita Derby June 6 in his most recent outing. He’s been prepping well in the mornings at Del Mar of late.

Indian Peak comes into the La Jolla off a half-length tally in the Snow Chief Stakes at Santa Anita on June 20. He first saw light of day in California and the son of Comic Strip was bred by his owners.

K P All Systems Go just missed in the Cinema at Santa Anita on June 6, then was back in the pack at Del Mar in the opening day Oceanside Stakes. He’s a New York-bred colt by veteran sire More Than Ready.