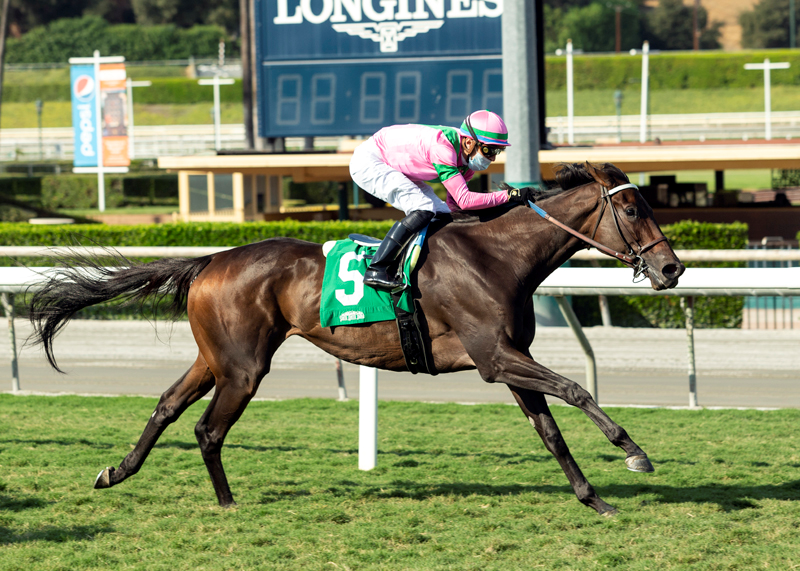 A field of eight was entered Wednesday for the featured $75,000 Kathryn Crosby Stakes as the seventh Bing Crosby Season commences Saturday at Del Mar.

The fall meeting, named for the track founder and entertainment superstar of the middle third of the 20th century in America, has generally been kicked off with the one-mile turf overnight stakes for older fillies and mares which honors his actress/wife. And Saturday’s edition has some interesting potential storylines.

Start with the obvious sentimental, but unlikely actual, favorite She’s Our Charm. The 4-year-old daughter of Candy Ride is trained by Hall of Famer Ron McAnally, who conditioned the filly’s sire to win the 2003 Pacific Classic for Sid and Jerry Craig and gave Julie Krone (all nearby residents of Del Mar) a leg up into the saddle so she could become the first female jockey to win the Classic.

She’s Our Charm, owned and bred by McAnally and his wife Debbie, has three wins in seven-lifetime starts, the first of them recorded here in her second outing in August of 2019. She comes in off a wire-to-wire turf mile victory against allowance competition at Santa Anita on October 16.

McAnally, 88, is third on Del Mars all-time list for training stakes wins with 77 and has posted multiple stakes winners here in every decade since the 1960s.

The 1-2-3 finishers in the Swingtime Stakes at Santa on October 16 – Cordiality, Muchly and Colonial Creed – all are entered to tangle again in the Kathryn Crosby. They held those 1-2-3 positions the entire turf mile with Cordiality going wire to wire in a time of 1:34.07.

Fifteen trainers with Del Mar connections put forth a total of 35 horses as pre-entries for the 14-race Breeders’ Cup Championship races on November 6-7 at Keeneland were announced Wednesday.

Topping the list, of course, was Hall of Fame trainer Bob Baffert with six pre-entries in four events. Authentic, Improbable and Maximum Security, winner of the TVG Pacific Classic here in August, comprise a formidable trio for the $6 million Longines Classic which is the climax of the two-day extravaganza offering a total of $28 million in purses.

Additionally, Baffert plans to send out Del Mar Debutante winner Princess Noor in the $2 million Juvenile Fillies; Classier, an impressive recent debut winner at Santa Anita, in the $2 million TVG Juvenile presented by the Thorough Aftercare Alliance; and Gamine in the $1 million Filly and Mare Sprint.

VIEW FROM THE RACING OFFICE: GOOD SIGNS FOR START AND FINISH

Based on stall applications and assignments, racing secretary David Jerkens projects there will be more horses on site for the Bing Crosby meeting than usual in 2020.

Saturday’s opening day program of the Bing Crosby meeting was put together on Wednesday with 76 total entries, 73 in the “body” of the nine-race card and three listed as also eligibles.

“We expected maybe a few more, but there are going to be some very competitive races and we’re certainly happy with the eight we got for the stakes (Kathryn Crosby),” Jerkens said.

After its Saturday-Sunday opening, the 15-day meeting runs Friday through Sunday through November 22 and closes with a four-day “Turf Festival” from Thanksgiving Day, November 26 to Sunday, November 29. Seven of the nine graded stakes during the meeting will be staged over the final four days over the Jimmy Durante Turf Course.

Those races, especially the Grade I Hollywood Derby and Grade I Matriarch Stakes, have been major enticements to East Coast trainers in the past and elite trainers Chad Brown, Mark Casse and Graham Motion, among others, have sent marquee runners with good success.

“Even in this COVID era, when people aren’t shipping to the extent they used to, we’ve received quite a bit of interest from back east,” Jerkens said. “And I know some local trainers have been acquiring horses (for turf stakes) as well.”

It has been so long since rain graced San Diego County that’s it’s easy to forget that torrential downpours forced cancellations of two race programs last fall, one of them a Thanksgiving card scheduled to start the final week, and the rescheduling of some graded stakes.

Still, the East Coast contingent was a strong one and the appropriately name Got Stormy closed things with a victory in the Matriarch for Casse.

“If the weather cooperates, I think we’ll get some very good horses from the east like we usually do,” Jerkens said.

A field of nine was entered today for Sunday’s $75,000 Let It Ride Stakes, a one-mile test over the Jimmy Durante Turf Course for 3-year-olds.

Margot’s Boy and Strong Constitution, each with a runner-up finish in a graded stake at Del Mar on his record, figure to rank among the main contenders.

Margot’s Boy, a gelded son of Clubhouse Ride bred and owned by Alfred Pais and trained by Craig Lewis, was second to Pixelate, beaten only a head, in the Grade II, $200,000 Del Mar Derby on September 6. He returns to the scene of that near triumph and cuts back to a mile after going 1 1/8 in the Del Mar Derby and a subsequent seventh in a field of nine in the Grade II, $200,000 Twilight Derby at Santa Anita, a race won by the razor sharp Smooth Like Strait.

Strong Constitution finished second in the Grade III, $100,000 Bob Hope Stakes for 2-year-olds here on November 16 of last year and made his first two starts of 2020 during the Del Mar summer meeting. He is owned by Roadrunner Racing and Sanjay Racing and trained by Doug O’Neill.

CLOSERS – In case you missed it: Larry Collmus will again serve as the track announcer for the Crosby meeting, filling in for Trevor Denman who opted to remain at his Minnesota home out of COVID-19 concerns … The Del Mar Thoroughbred Club announced a 10 percent blended increase in overnight purses and the highest bonuses ever tied to the popular “Ship & Win” program. Overnight purse levels will be increased by approximately 10 percent with the track’s minimum purse for the fall program raised from $17,000 to $20,000. The “Ship & Win” program marks its 10th anniversary with its richest incentive ever, a guaranteed $3,000 “starter fee” for all runners… Jon White, the longtime morning line maker at Santa Anita, will serve as Del Mar’s oddsmaker for the fall season… There’s a new 50-cent minimum Pick Six format.