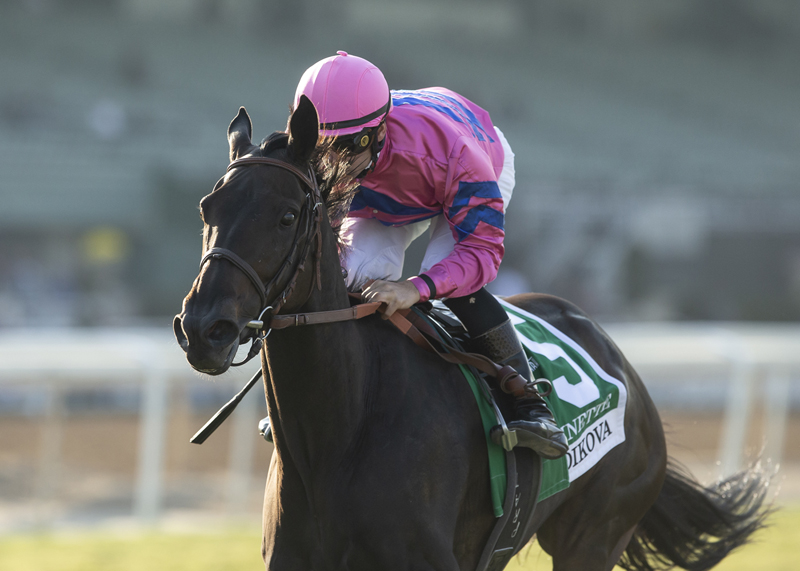 The odds delineate the situation for Neil Drysdale-trained Toinette in Sunday’s Grade I $300,000 Matriarch Stakes, the culmination of the seven-stakes “Turf Festival” that begins with four graded events Saturday.

Toinette, based at Del Mar or Santa Anita for an entire four-race 2019 campaign that began with an allowance win here in August, is the 7-2 third choice on Russ Hudak’s morning line. The first, second and fourth and fifth choices, - the only others in the field of 11 starting off at single-figure odds - are all invaders from the east.

But if Toinette, a 4-year-old Kentucky-bred daughter of Scat Daddy who will be ridden by Flavien Prat, is cast in the role of local hope, that hope is very legitimate.

“She fits,” said Prat’s agent Derek Lawson. “She fits very well. The shippers are very good and they’ve got Grade I experience and Got Stormy has a Grade I win. But Toinette ran a huge race in the Goldikova and we think she’s going to be one of the best turf mares in the country next year.”

A $110,000 purchase at the Keeneland September sale in 2016, Toinette made her only start as a 2-year-old at the 2017 Del Mar fall meeting. A three-year-old campaign of four wins in five starts started and ended at Santa Anita with assignments in Kentucky and New York in between.

A racing break from October of 2018 to August of this year ended with a comeback win in an allowance at Del Mar which was followed by a third in the Grade II John C. Mabee here and wins in the ungraded Swingtime and Grade II Goldikova at Santa Anita. All except the Mabee have been at the one mile distance of the Matriarch.

Prat has been aboard for six of Toinette’s last eight starts, the times absent due to conflicting commitments on standout mare Vasilika.

“Toinette has always been a horse we’ve wanted to stay close to,” Lawson said. “This (Matriarch) is obviously is the biggest race of her career to this point, but we’re looking forward to it. She’s got an explosive turn of foot. When Flavien sets her down, she really responds.”

The Matriarch goes as the seventh of 10 races on a Sunday program starting at noon.

DURANTE COURSE LISTED AS ‘GOOD’ FOR START OF TURF FESTIVAL

The Jimmy Durante course will be listed as “good” for Saturday’s first four of seven graded stakes that constitute the Turf Festival on the final two days of the Bing Crosby fall meeting.

The grounds at Del Mar have been inundated with 4 ½ inches of rain over the past two weeks and turf racing was limited to preserve the surface for the stakes bonanza. Sunny and windy conditions Friday, when all races were contested on the main track, helped dry the course enough to merit the “good” rating that turf superintendent Leif Dickinson predicted in an interview with Tod Leonard of the San Diego Union-Tribune.

“It’s going to be on the softer side, but good,” Dickinson said.

It passed the eye test from horsemen sending out workers on the main track Saturday morning.

“It looks fine,” said Leandro Mora, assistant to trainer Doug O’Neill. “There was a lot of rain on it, and if this were a new turf course I might be worried. But it’s been here for a long time and it looks good to me.”

The four stakes races on the Saturday program will be run on the turf course but the 10th race, a maiden special mile, will be switched to the main track to preserve the grass for Sunday’s final three stakes. As a result of the change, scratches reduced the field from 14 to eight.

The main track, which was listed as “good” for the first seven races on Friday before being upgraded to “fast” for the final two, remains “fast.”

Hall of Fame trainer Richard Mandella will send out Goliad in the Grade III $100,000 Cecil B. DeMille Stakes for 2-year-olds and United in the Grade II $200,000 Hollywood Turf Cup Sunday.

“They’re two nice young colts that we’ve had a lot of hopes for,” Mandella said Saturday morning. “We hope those hopes will be fulfilled.”

Goliad, a Ramona Bass homebred son of War Front, debuted at Santa Anita on September 28 with a neck victory in a turf mile and was beaten a neck by DeMille rival Hariboux under similar conditions at Del Mar 16 days ago. The DeMille is also a mile on turf.

“He’s a big, growing, immature colt that hopefully will get better as he goes,” Mandella said.

United, a winner of three of 10 lifetime starts with earnings of $822,891 for owners LNJ Foxwoods, was edged in the final strides by Horse of the Year candidate Bricks and Mortar in the $4 million Breeders’ Cup  Turf on November 2 at Santa Anita.

“He has been training well since,” Mandella said. “The weather hasn’t affected us any more than anybody else. We missed one day of training, but that’s it.”

“No sense losing any sleep before you have to,” Mandella said.

Drayden Van Dyke notched one win and Rafael Bejarano scored twice as racing resumed Friday. The win allowed Van Dyke to forge a tie for the lead in the jockey standings. The double moved Bejarano into strong contention for the riding championship entering the final two days of the meeting.

Van Dyke’s victory aboard Bold Endeavor ($38.00) in the seventh race moved him back into a tie for the lead with Abel Cedillo. Van Dyke has 11 wins from 43 mounts, Cedillo the same number from 54 rides.

Bejarano, who counts the 2015 Bing Crosby meeting among his six Del Mar jockey titles, won aboard Don’tteasethetiger (3rd, $13.40) and Winning Element (4th, $9.40) to move into a tie for third with Flavien Prat. Bejarano has eight wins from 42 mounts, Prat is 8-for-38.

Prat is booked to ride eight of the 10 races Saturday. Cedillo and Van Dyke each have seven mounts and Bejarano five.

None of the training leaders saddled a winner on Friday, leaving Richard Baltas with a 9-5 lead over Peter Miller and Mike Puype atop the standings. Baltas is 9-for-30 and Miller 5-for-25, while Puype has hit with half of his 10 starters.

Baltas is scheduled to saddle 10 representatives on Saturday, Miller will send out four and Puype two.

CLOSERS – The Pick Six carryover for Saturday’s card, after there were no tickets with six on Friday, is $125,176. The Pick Six begins with the fifth race … Joe Talamo, two wins shy of career No. 2,000, is booked to ride four on Saturday, among them Uncle Bull for Mark Casse in the Grade I Hollywood Derby.