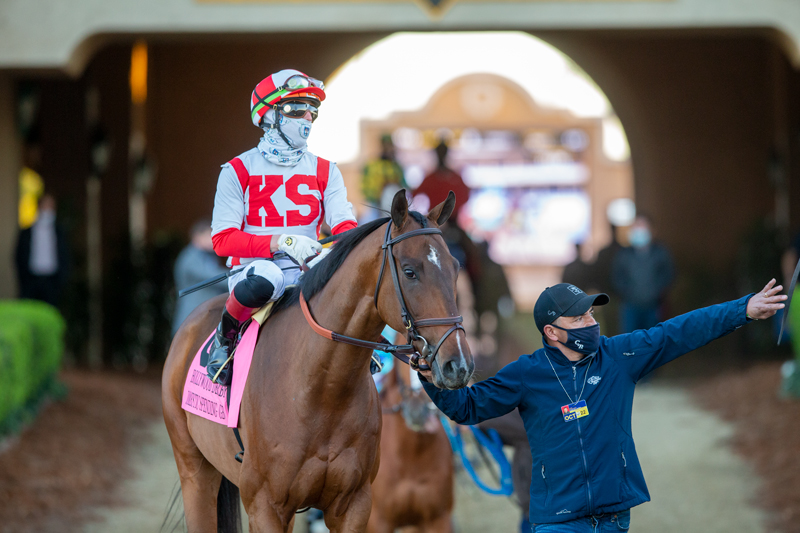 AN INSIDE VIEW OF BROWN’S TURF FESTIVAL EQUINE ALL-STARS

A week or so ago, Jose Hernandez and a couple of stable hands were sent west by mega trainer Chad Brown with eight horses to run in five of the seven grassy stakes in Del Mar’s closing four days of the Bing Crosby Season.

A series semi-officially known as the ‘Turf Festival’.

On this closing day of the season and the festival, it can be said (here comes the Latin) that Hernandez and crew have veni-ed, vidi-ed and are one step away from totally vici-ing the series.

Team Brown stands poised to complete the conquest with 7-2 morning line favorite Viadera plus Blowout and Tamahere, both 4-1, in today’s Grade I, $300,000 Matriarch.

Hernandez, 44, has been an assistant to Brown for 13 years and point man for the Crosby Fall Season invasion for the last three years. In 2018, he oversaw a sweep of the Grade I events with Raging Bull in the Hollywood Derby and Uni in the Matriarch.

Hernandez provides information on the horses daily, but the race planning and strategy is, of course, strictly up to Brown. It’s a real asset that the rider to which Hernandez gives a leg up is either the No. 1 in the nation, Irad Ortiz, Jr., or No. 2, Joel Rosario.

But Hernandez is in the enviable position of having hands-on responsibility for the equine athletes on the travelling squad. And here are some insights from him about them:

One thing is for sure though about theme all, if they come out of the Brown barn they can run.

D’AMATO SCORES ONE FOR THE HOME TEAM IN SEABISCUIT

The monopoly on victory in ‘Turf Festival’ stakes by eastern trainers and jockeys was broken up Saturday when Phil D’Amato trained Count Again ($18.80), ridden by Juan Hernandez, came from next-to-last in a field of 12 for a three-quarter length victory in the Grade II, $200,000 Seabiscuit Handicap.

Count Again was a recent addition to D’Amato’s stable when sold by Sam-Son Farms following four starts for trainer Gail Cox in Canada.

“Gail Cox delivered this horse to me in excellent condition and I’m very fortunate to have him,” D’Amato said. “She got him going really well and his confidence level good and I just kind of trained on from that…

“Juan followed our plan: I told him to save all the ground and come with a run. If the race sets up for us, fine, if not we’ll stretch him out next time. He followed those instructions to a T.”

It was the third stakes victory at Del Mar for Hernandez since relocating from Northern California earlier this year.

“He’s an excellent finisher,” D’Amato said of Hernandez. “He’s got great, soft hands and he gets horses to relax early and finish late. As soon as I got this horse, I thought (Hernandez) would fit him well. He’s breezed him for me a couple of times and I think that helped a lot today.”

JOCKEY TITLE RACE IS FOR SECOND; BALTAS HAS EDGE AMONG TRAINERS

Defending Bing Crosby Season riding champion Abel Cedillo enters the final day of the meeting with an eight-win advantage (19-11) over Flavien Prat and Umberto Rispoli atop the Torrey Holistics leaderboard.

And, rather than rest on his laurels, Cedillo is booked to ride every race on a 10-race card. Trophy makers: start your etching tools.

The race for second, however, is an interesting one with Prat and Rispoli in a repeat of last summer season’s finale in which Prat prevailed by one via a victory in the Del Mar Futurity, the penultimate race of the meeting. Prat has eight mounts on closing day, Rispoli six.

Two other jockey notes of interest: Irad Ortiz, Jr., riding only the last three days of the season, has made his way to a tie for 10th in the standings with 5 wins (3 seconds, 1 third) from 16 starters. He has seven chances to add to the totals today; apprentices Alexis Centeno and Jessica Pyfer have notched four wins each from 48 and 31 mounts, respectively. Pyfer has two closing day chances to break the tie.

Miller, a four-time Crosby Season training champion may be down, but can’t be counted out since he has 12 scheduled starters to five for Baltas and four each for co-third Phil D’Amato and Richard Mandella.

THROUGH IT ALL, CROSBY SEASON STATISTICS ARE UP FROM 2019

Meeting statistics, compiled by and courtesy of the racing office, barring late scratches from the final card:

CLOSERS – Timothy Yohler of Fisher, IN, scored huge in the last race of the Del Mar Fall Challenge Saturday and won more than $75,000 in the handicapping event which maxed out with 100 participants. Yohler vaulted into the lead with large exacta and trifecta wagers on the Hollywood Derby, turning his final $1,500 bankroll into $30,180. In addition to the bankroll, Yohler received $35,000 in cash for first place and a $10,000 2021 Breeders’ Cup Betting Challenge entry when Del Mar hosts the championship event for a second time next November… Thanks to all Stable Notes readers. Farewell until Del Mar returns with its 82nd summer season next July.

*A previous version of the notes incorrectly listed Decorated Invader.