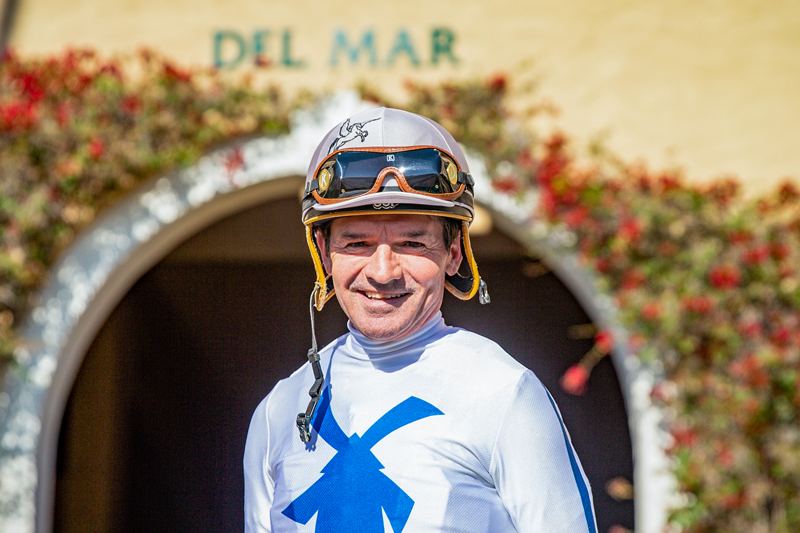 One week into his return to the races and Kent Desormeaux says he couldn’t feel better. The Hall of Fame jockey has ridden in nine races during Del Mar’s fall meet and has yet to win but he has a second and a third and knows the wins will come.

“I didn’t forget how to do that,” Desormeaux says about winning. “I’ve done that 62-hundred times. I don’t care that anybody calls me ‘oh fer’ right now. I’m pretty sure with the confidence of an owner and trainer we’ll get the job done.”

To be exact, Desormeaux has 6,116 victories over his 36-year career. But he finds himself once again coming back from a suspension directly connected to his alcoholism and having to prove himself all over again.

“I was oddly enthused,” Desormeaux says about his first week back. “My first rides were not stellar but I was still very excited. I was glad to be back in the saddle and it was fun to be out there.

“The appreciation was there,” he continues. “I was grateful to Del Mar for allowing me to pilot the ponies.”

Desormeaux was suspended from racing back in January due to an altercation in the Del Mar RV park last fall. It was the third time in two years he had been suspended for alcohol related issues.

Now he’s been sober for 90 days. He’s gone through rehab and believes this time will be different because he’s taking the initiative, versus being told he has to do it.

“This time I’m doing it,” Desormeaux says. “I want to. No court orders. I want to be sober and any alcoholic will understand exactly what that means. I’m not being told where to be. I want to be there.”

He says rock bottom for him was needing permission to ride and the fact that his situation up at Santa Anita is ‘to be determined’ bothers him greatly.

“I’m very excited to return to my backyard at Santa Anita,” Desormeaux says. “I feel remorseful that there is a delay because of my off-track character.”

That aside, Desormeaux is finding plenty of support from the people in the industry.

“So many well wishes and encouraging comments,” Desormeaux says. “That’s humbling to be missed. People get used to seeing me so now that I was away for a while they have someone that they know, who’s been in the business, to pull for again.”

Desormeaux has won three Kentucky Derbies, six Breeders’ Cups, three Eclipse Awards and he’s in the Hall of Fame. Which raises the question, what does a guy with so many achievements have to prove at this stage of his career.

“Mostly my desire to be sober and clean,” Desormeaux says, “and make each and every person proud of the legend that I’m supposed to be. I think with a chance, even after hitting rock bottom, I want prove that I can do it. I want to show that it can be done.

“It’s a great motivator,” he continues. “It certainly helps me to wake up in the morning.”

ANOTHER GROUP OF SHIPPERS AIMING FOR CLOSING WEEKEND STAKES

Del Mar is bracing for another invasion this coming week.

The nominations for next weekend’s stakes at Del Mar have been released and the five races are laden with out-of-town shippers, all coming to the seaside oval to lay claim to a piece of the $1.1 million in purse money up for grabs.

Trainers Chad Brown, Graham Motion, and Christophe Clement have nominated horses for the G3 Jimmy Durante, the first of three graded stakes run on Saturday. Brown has a pair of horses eyeing the race for 2-year-old fillies. Liguria broke her maiden last out at the Belmont at Aqueduct meet. Private Credit broke her maiden at Monmouth Park in September, winning by four lengths.

Motion is thinking of running Pallotta Sisters, a maiden winner last out at Delaware Park and Clement may bring Smokie Eyes, a third-place finisher in the Chelsey Flower at the Belmont at Aqueduct meet last month.

The Hollywood Derby is the first of two Grade 1 races scheduled for next weekend. Motion has three colts nominated for the 1 1/8 mile turf race. Evan Harlan broke his maiden at the Belmont at Aqueduct meet, Speaking Scout ran second to Cabo Spirit in the G2 Twilight Derby last out after winning the Hawthorne Derby two races back. And Script just missed with an impressive closing kick in the Let It Ride Stakes at the beginning of the Bing Crosby meet.

Trainer Shug McGaughey is considering running Celestial City in the Hollywood Derby. The son of Uncle Mo won the G2 Hill Prince at Belmont at Aqueduct last out. He also ran second to Annapolis in the G3 Saranac and third in the G2 Hall of Fame, both at Saratoga this summer.

Another possible invader for the Derby is trainer Todd Pletcher’s Wit, runner up to Ready to Purrform in G2 Hall of Fame before winning the $135,000 Better Talk Now Stakes at Saratoga. He then missed by a neck to Balnikhov in the Bryan Station at Keeneland last month.

Two more would-be shippers have been nominated for the G3 Cecil B. DeMille Stakes, a mile turf race for 2-year-olds that will be run Sunday. Motion, who has kept a string of horses here at Del Mar this fall, may run Disdainful, an Irish-bred who ran second in an entry level allowance at Keeneland in his U.S. debut last month.

Also under consideration is Liar’s Poker from the Clement barn. He broke his maiden in his debut at Belmont at Aqueduct.

The final race of the Fall Turf Festival, and final stakes of the Bing Crosby meet, the G1 Matriarch, has attracted the eye of Chad Brown who has nominated multiple grade one winner Regal Glory and Dolce Zel.

Clement is thinking of bringing Pizza Bianca back to the scene of her best race. She won the Breeders’ Cup Juvenile Fillies Turf here at Del Mar in 2021.

Motion may run Kathryn Crosby winner Bipartisanship in the Matriarch, while trainer Bill Mott has nominated Wakanaka, runner-up to Regal Glory in the G1 Just A Game this summer at Belmont Park. She followed that with a victory in the G2 Dance Smartly at Woodbine in July and won the $350,000 Fall Harvest Stakes at Keeneland on the  Breeders’ Cup undercard.

Entries for the three Saturday races will be drawn Wednesday and for the two Sunday races on Thursday.

It’s not every day you get to meet a famous track announcer, let alone one who has called the Kentucky Derby, the Breeders’ Cup and a Triple Crown. But you can now at Del Mar.

Collmus Call for CARMA is in full swing this fall. It’s the opportunity for fans to sit in with Del Mar track announcer Larry Collmus while he calls a race. The special event raises money for CARMA, the California Retirement Management Account, a non-profit that provides funding for the rehabilitation, retraining and/or retirement of California-raced Thoroughbred horses.

For $100 fans get a stretch run box seat, track admission and a racing program. Plus they get to meet and greet Collmus and actually stand in the announcer’s booth on top of the grandstand while he calls the third race of the day. It’s a unique experience for any race fan.

Tracy and Chris Corner of Woodside, a small horse community up in the Bay Area, took advantage of the opportunity Saturday. Since Collmus called the races at Golden Gate Fields and the fair circuit for four years, the three swapped stories about the mule races held at Pleasanton.

“It’s cool for us to meet Larry,” Chris gives as their reason for participating in Collmus Call for CARMA. “Larry Collmus called the American Pharoah Triple Crown. I was waiting for that Triple Crown forever. But also we were very attracted to fact that this is for CARMA. The money doesn’t matter because I like where it’s going. It’s going back to where it should, to the horses.”

The Corners said the experience was everything they hoped for.

“We will do this again if you guys keep doing this,” Chris says, “Del Mar is our favorite because of everything you do here. Last night we walked to dinner in our sandals in November. Any kind of benefit that Del Mar comes up with that gives the money to aftercare, and it’s something fun like this, would be something we would continue to do.”

“We did this at Saratoga when I was calling there,” Collmus says. “I thought it would be a great idea to bring it here and it seems like it’s working out well.”

Collmus says he loves the interaction with the fans.

“I’ve always enjoyed meeting different people,” he says. “Sometimes you get people who don’t go to the track that often. Then you have this couple (the Corners) who are more familiar with racing. I think it’s great to have people come up (to his booth). Obviously it’s for a terrific cause and hopefully we can keep people coming.”

It’s easy to be a part of a Collmus Call for CARMA. Just contact the Del Mar ticket office at dmtc.com/tickets or call 858-792-4242