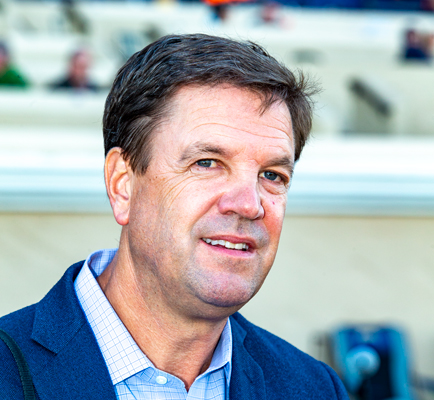 Maryland-based trainer H. Graham Motion won the 2015 running of the Red Carpet Stakes with Rusty Slipper. Motion’s assistant Alice Clapham, who has travelled with his horses to Del Mar since 2009 as part of worldwide assignments, was here to do the preparation work and saddling.

That combination, both natives of England, will be seeking a second score in the Grade III, $100,000, 1 3/8th mile race for older fillies and mares on Thanksgiving Day. It’s the first of seven graded stakes which make up the four-day Turf Festival to end the Bing Crosby Season.

Single Soul, a 3-year-old, English-bred daughter of  Dubawi, notched her second win in six career starts in a Belmont Park allowance race on October  22 and has been training since at Motion’s facility in Fair Hill, Maryland. The most recent work was Saturday, five furlongs in 1:03 breezing.

Single Soul is scheduled to journey here on Tuesday. Clapham has been at Del Mar since before the Breeders’ Cup earlier this month.

“I haven’t heard anything about the work, but (Motion) must have been happy with it or he wouldn’t have entered her,” Clapham said this morning. “I’ve been around her before and she’s a really sweet filly. She hasn’t travelled before but she seems quite sensible, so you’d think she will be OK with it.”

Single Soul had a forgettable debut for trainer Chad Brown on a yielding surface at Belmont a year ago. In five starts for Motion she has never been off the board, notching a maiden win at Belmont Park in June and the 1 1/8-mile allowance there as an odds-on favorite in a field of six last month.

The Red Carpet will be her first race at the stakes level.

“We think she’ll like the longer distance and we know she likes firmer turf,” Clapham said. “You can’t really get that in New York right now, so this looks like a nice spot. Graham is sending out some for other races as well, so it kind of works out.”

A victory, or high placing, for Acclimate, Astronaut or Rockemperor, would salve the sting of ill-starred efforts in the Breeders’ Cup, in the case of Astronaut and Rockemperor after gaining entry through “Win and You’re In” victories.

Astronaut rallied in the stretch for a half-length victory in the Del Mar Handicap at odds of 24-1 on Pacific Classic Day in August. Hall of Fame jockey Victor Espinoza found no clear path in the BC Turf, however, had to check hard before the quarter pole and finished 12th  of 14. Rockemperor won the Turf Classic at Belmont Park in October but was in tight quarters throughout in the BC Turf and finished eighth.

Acclimate, with one win and three narrow losses in graded events leading up to the BC Turf was close to the pace early before fading to last.