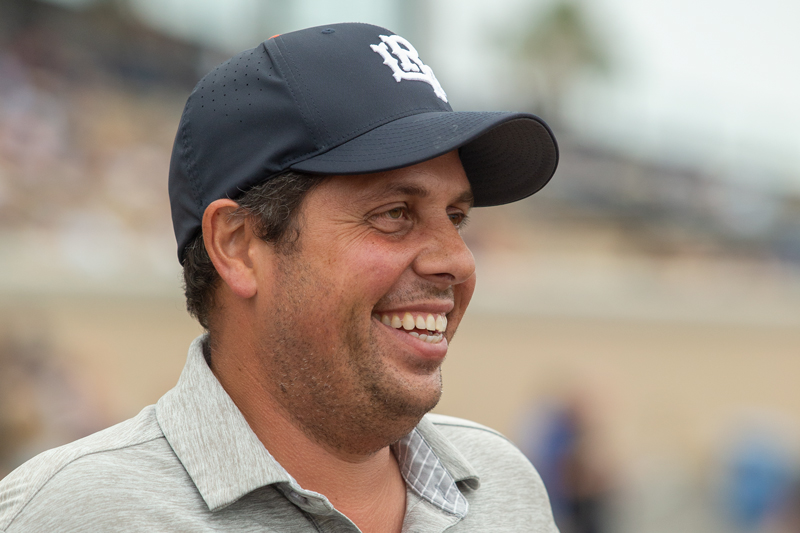 When Phil D’Amato drove off the Del Mar Fairgrounds in September he brought with him a share of the trainers’ title from the summer meet and arguably the hottest barn in Southern California. Since then, the line-up has changed a bit but D’Amato again brings a formidable force to the Bing Crosby meet which gets underway Friday.

A few of his star equines are no longer in the barn. They’ve been retired and are off to the breeding shed or turned out for the winter. D’Amato is still packed with enough talent to defend his fall meet crown, though, and notch his third consecutive trainers title at Del Mar.

“We’re bringing 40 horses down to Del Mar to train there through the remainder of the meet,” D’Amato says. “A nice array of 2-year-olds to older horses, allowance and stakes horses as well. We have them ready for all those nice races you have there.”

D’Amato tied Bob Baffert for the summer meet training title at Del Mar with 19 victories, four of them graded stakes. Going Global won the G2 Yellow Ribbon, Gold Phoenix the G1 Del Mar Handicap, Hong Kong Harry the G2 Del Mar Mile, and Bellabel the G2 San Clemente. He also took down the $100,000 Oceanside Stakes on opening day with Balnikhov and the $100,000 Juvenile Turf Fillies with Comanche Country. All of his stakes winners are Irish-breds.

“Recently we’ve had out-of-town owners who have sent me horses as well as owners purchasing horses overseas,” D’Amato explains, “so we kind of have both of those avenues going. It definitely helps coming up with a top roster of grass horses for racing in California.”

But D’Amato will be the first to tell you, it’s not the trainers titles that float his boat.

A couple of his stars will be making appearances at Del Mar this fall. Hong Kong Harry is being pointed to the G2 Seabiscuit on November 26th; Balnikhov may go in the G1 Hollywood Derby December 3rd. Bellabel will train at Del Mar but there’s no plan on racing her during the fall meet. Instead she will be pointed to the American Oaks at Santa Anita.

Gold Phoenix has been turned out for a 30-day freshening with plans to get him started later next year in hopes of defending his title in the Del Mar Handicap. He has been joined at Kingfisher Farms in Solvang by Comanche Country, who will get a brief freshening before starting her 3-year old campaign.

Going Global was retired. Going to Vegas was sold to Japanese interests at the recent Fasig-Tipton November Sale at Keeneland.

D’Amato will be a fixture at Del Mar during the Bing Crosby meet with plans of staying in town for the four weeks instead of commuting back up to Los Angeles like many trainers do during the fall meet.

“I enjoy the fall meet,” D’Amato says. “I wish it was longer; I wish we could train there more. It’s just a great track to train on.”

One indication of the improving popularity of the Bing Crosby meet at Del Mar is this year’s lucrative, record-setting stakes schedule and the first of the 15 stakes races, the $75,000 Let It Ride Stakes, takes place opening day Friday. A field of nine 3-year olds will enter the starting gate for the one mile turf test.

Trainer Graham Motion has sent out a string of four horses for the opening weekend. The East Coast-based trainer has made a habit of dabbling a bit at Del Mar over the past few years. One of his horses will run in the Let It Ride. Script, a son of Algorithims, returned from an eight-month layoff and won an entry level allowance at Keeneland last out. He’s a horse Motion has always been very high on.

“I thought he had the potential to be a Derby-type horse,” Motion says. “He just didn’t pan out on the dirt and then he got sick in the spring with a low grade pneumonia. So we gave him the whole summer off at Stone Farm, brought him back and it was so gratifying to see him run so well at Keeneland in that allowance race.”

He was ridden by jockey John Velazquez that day and will be ridden by the veteran jockey again in the Friday feature. Velazquez, like his fellow New York-based rider, Flavien Prat, has moved his tack to Southern California for the fall and winter.

Handy Dandy is the most experienced of the group running in the Let It Ride. The son of Fury Kapcori has raced 12 times and finished in the money in nine of those starts. After clearing an entry level allowance at Del Mar this past summer he finished fourth in the G2 Twilight Derby at Santa Anita last month. He hails from the barn of Peter Miller, fresh off winning the trainers title at Santa Anita’s fall meet.

“He’s been a little bit unlucky,” Miller says of Handy Dandy. “He had a rough trip last time in the Twilight Derby and we’re hoping we get a better trip and the horse can show what he can do.”

Jockey Juan Hernandez is back on board after riding Hawthorne Derby winner Speaking Scout for Motion in the Twilight Derby.

“Juan knows the horse very well,” Miller adds. “It wasn’t necessarily Umberto’s (Rispoli) fault last time. It was just circumstance. But Juan has won on the horse and ridden him plenty and so we felt Juan gave us our best chance to win.”

Trainer George Papaprodromou has brought two to the party. Time to Party was claimed from the Peter Miller barn last month after winning a claiming allowance at Santa Anita at the same distance as the Let It Ride. Papaprodromou will also run Law Abiding, a son of Jimmy Creed, who is stepping up into stakes company off of his maiden victory last out.

Spycatcher is another one to watch. The runner-up at 68-1 to Slow Down Andy in the G2 Del Mar Derby last summer is back for another run on the Jimmy Durante turf course. The son of Noble Mission has not raced since his Derby outing in September.

The Let It Ride Stakes is the seventh of eight races on the Friday opening day card. It’s named after the popular 1989 movie starring Richard Dreyfus that has become a favorite among horse players.

BING CROSBY MEET MAKING HISTORY OF ITS OWN

The idea of a fall meet at Del Mar evolved out of the closure of Hollywood Park back in 2013. The iconic track’s fall dates became available and were distributed to Del Mar and Los Alamitos. Del Mar’s first fall meet took place in 2014.

“I remember the first entry day,” Del Mar racing secretary, David Jerkens recollects. “It was quiet. I was a bit nervous wondering if this actually was going to work. But thanks to the support of the California racing industry it’s been, I think, one of the most positive meets in California.”

Some top horses have raced during the fall meet over the years. California Chrome got the ball rolling the first year when Art Sherman and company brought their Kentucky Derby winner for the Hollywood Derby. It was Chrome’s first and only race on the grass.

2015 Arlington Million winner, The Pizza Man, ran in the Hollywood Turf Cup that year and later in the meet Dortmund set a stakes record that still stands in the Native Diver. Trainer Graham Motion brought Ring Weekend and won the 2016 Seabiscuit, while Chad Brown won the 2018 Matriarch with his eventual Eclipse Award winner Uni. And who could forget the dazzling Got Stormy who shipped-in for Mark Casse and won the 2019 Matriarch.

COOLING OUT: The guard at the stable gate on the northeast side of the property has seen a steady flow of horse trailers over the past 24 hours as more horses arrive for the fall meet. Trainer Peter Miller shipped-in 14 horses Wednesday…Final preparations continue for Opening Day tomorrow. Gates open at 11 a.m., first post is at 12:30 p.m. Eight races are scheduled for the opener with nine set to go Saturday…The main track was open Thursday morning for training for the first time since Monday. There was only one official work recorded but several horses galloped and stretched their legs on the track which had been sealed for nearly 48 hours due to this week’s storm.