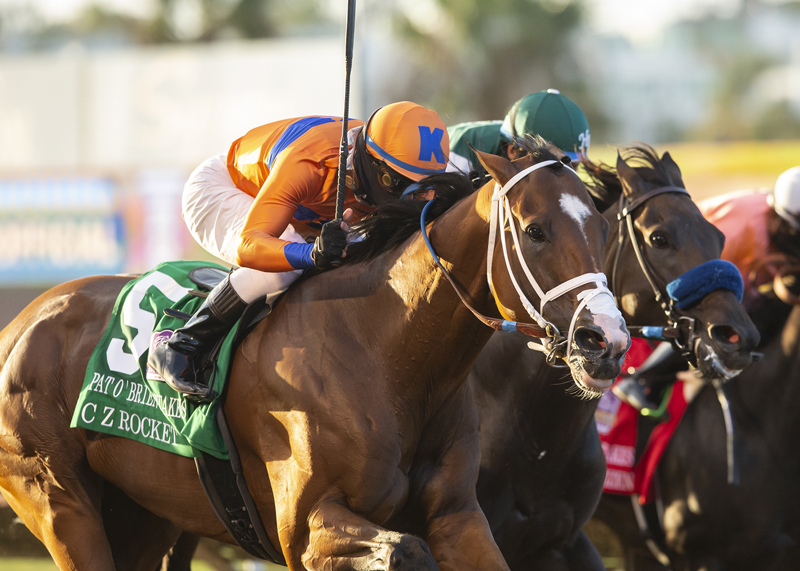 RAIN WAS A PAIN, BUT C Z ROCKET AIMED TO SHINE IN GRADE I CROSBY

C Z Rocket, whose ascent from $40,000 claim by trainer Peter Miller to millionaire sprinter status began just 15 months ago, started his 2021 campaign with victories in six-furlong stakes races in March and April at Oaklawn Park in Hot Springs, AR.

Then, in May, the 7-year-old City Zip gelding was entered in the Steve Sexton Mile at Lone Star Park in Texas, caught a sloppy track and was beaten 3 ½-lengths by Mo Mosa as the 8-5 favorite.

Now, it’s back to six-furlong sprinting in Saturday’s Grade I, $300,000 Bing Crosby Stakes. It’s back to Del Mar, where he powered to a half-length victory in the 7-furlong Pat O’Brien last year, one of five wins after the claim by Miller which -- along with a runner-up to Whitmore in the $2 million Breeders’ Cup Sprint – produced $651,901 in earnings.

The three 2021 starts have added another half-million to boost C Z Rockets career earnings to nearly $1.4 million. A Crosby win would add another $180,000 and guarantee a spot for a return to the BC Sprint here on November 6.

So, understandably, the Texas race is no longer even a spec in Miller’s rear view mirror.

“He’s never run well on an off track and a mile’s not his distance, so he actually ran better than I expected,” Miller said Friday morning. “He’s 0-for-4 in his career on off tracks and he’s a one-turn horse.

“The races at Oaklawn, he didn’t look like he’d lost anything at all (from 2020), he looked like the same horse.”

Only on rare occasions has Del Mar’s main track been anything but fast. Miller has yet to win the Bing Crosby, but he saddled Roy H. to win the Breeders’ Cup Sprint over the course when the fall championship was here in 2017 and C Z Rocket’s  Pat O’Brien score was the second for Miller in that event. His first was with Appealing Tale in 2015.

“(C Z Rocket) just needs a fair racetrack,” Miller said. “It has been somewhat speed favoring and that wouldn’t favor him at all.”

HAVING KNOCKED ON GRADE I DOOR, ‘HARBOR’ SEEKS HIRSCH ENTRY

Venetian Harbor has won three Grade II stakes in her nine-race career. But it has been close (twice) but no cigar in three attempts to put a Grade I victory on the 4-year-old filly’s commendable career.

Accomplishing that coveted feat will be the aim Sunday when trainer Richard Baltas sends out daughter of Munnings, owned by Ciaglia Racing and Highland Yard, in the Grade I, $300,000 Clement L. Hirsch.

Against Grade I competition the results have been runner-up efforts in the 1 1/16-mile Ashland (July, 2020, Keeneland) and seven-furlong Test (August, 2020, Saratoga) and last of eight in the Breeders’ Cup Filly & Mare Turf Sprint (November, 2020, Keeneland)

That said, the success in the Monrovia, coming at the end of a seven-month layoff, and a string of recent bullet works at San Luis Rey Downs, offer plenty of reason for optimism about the 1 1/16-mile Hirsch.

“It’s a very tough race, there are some very good mares in there and it might be a little long for her. But if she can get out there, relax a little bit and get a breather we’ll see what happens.

“Our strategy isn’t necessarily to go, you play the break. But I don’t know if anybody is going to want to go right with her … She’s done very well, winning three Grade IIs, but Grade Is are always the goal for everyone.”

The Hirsch is a “Win and You’re In” race for the $2 million Breeders’ Cup Distaff at Del Mar on November 6.

GEROUX HAS BIG TWO, AND MORE TO BOOT, ON WEEKEND VISIT

Jockey Florent Geroux will be in from his Kentucky base to ride at Del Mar on the Saturday and Sunday programs.

Geroux is booked aboard three other mounts in the 11-race Saturday card and one on the 10-race Sunday program.

Miller said he secured the services of Geroux for CZ Rocket – who he has ridden in three 2021 starts and five of his last eight since June of last year – well in advance.

“He was coming to ride for me, and then I think he learned Shedaresthedevil was coming and decided to stay,” Miller said. “We locked him up 45 or 60 days ago. He rides (C Z Rocket) the best, he fits him very well.”

Geroux’s year has been made especially interesting for experiences on Mandaloun for Cox, the nationally prominent trainer for whom he is regularly called upon to ride. Mandaloun finished second in the Kentucky Derby, but could still become the winner pending the Kentucky Racing Commission’s decision on Medina Spirit. And, after being narrowly beaten by Hot Rod Charlie and Prat in the $1 million Haskell, Mandaloun was declared the winner by disqualification.

Geroux has two stakes victories at Del Mar, aboard Gun Runner in the 2017 Breeders’ Cup Classic and Acclimate in the 2019 Del Mar Handicap.

In other jockey news: Veteran Wayne Barnett, a recent addition to the colony, is nine wins shy of 1,000 in a career begun in the 1980s in Michigan that has included stops at many other tracks across the country. Barnett has two mounts on Friday’s card and one on Saturday.