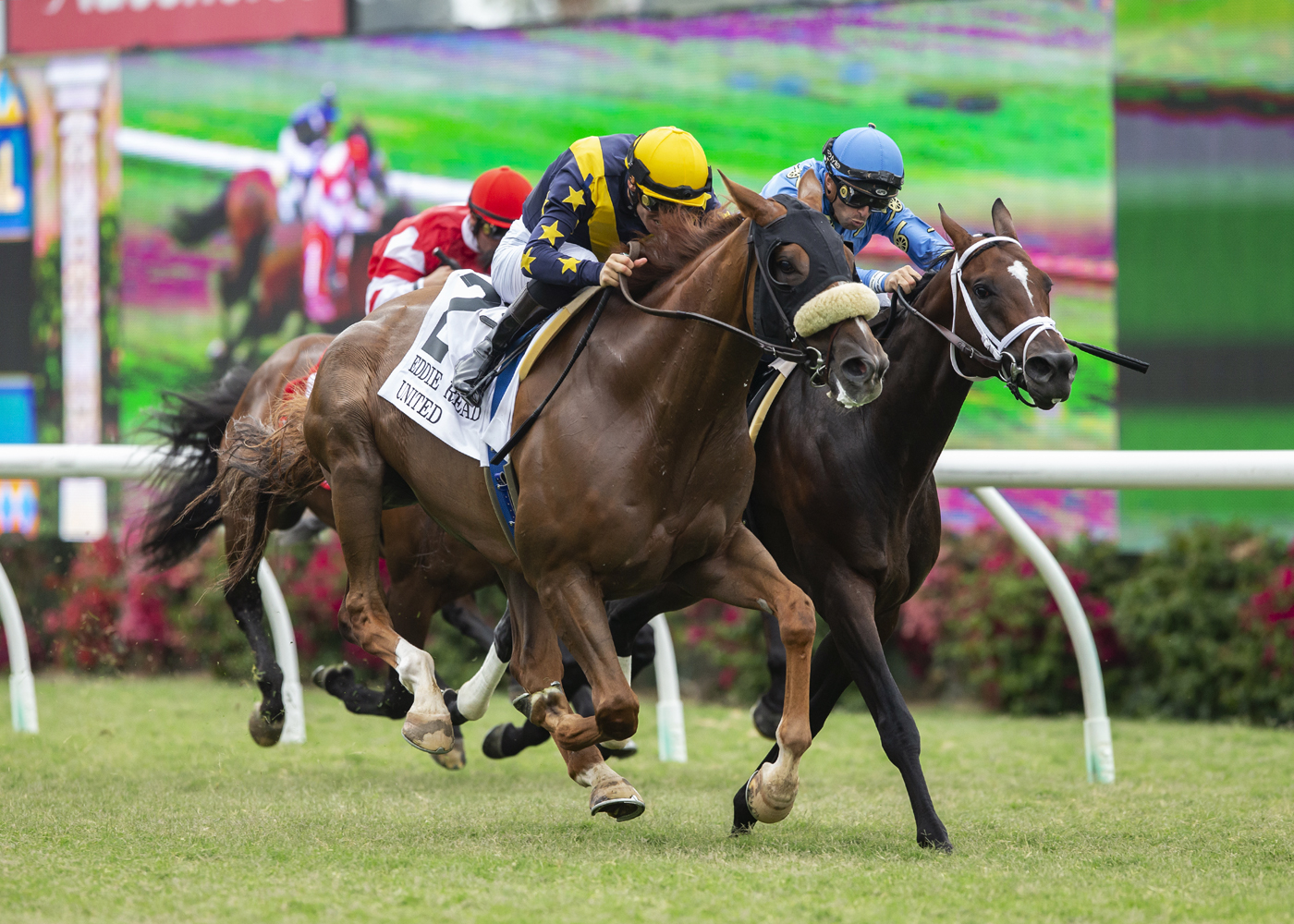 PRIMARY TARGETS ARE NEXT FOR UNITED, MADONE AFTER MAJOR WINS

United and Madone came out of their respective Grade II wins in the $250,000 Eddie Read and $200,000 San Clemente Stakes on Saturday in fine fettle, their trainers reported Sunday morning.

In defending his Read title United, a 6-year-old gelded son of Giant’s Causeway, rebounded from a lackluster last-of-four effort in the Charles Whittingham on May 29 at Santa Anita. That effort had Hall of Fame trainer mystified until a small bruise was found under a shoe.

Under Flavien Prat on Saturday, United went willingly between rivals on the far turn and prevailed by a neck in a stretch duel with even-money favorite Smooth Like Strait.

“He went back to his old form,” said Prat.

A year ago, the Read win prompted Mandella to toy with the idea of entering United in the TVG Pacific Classic. After a few days of thought, and also becoming aware that the Classic purse had been dropped from $1 million to $500,000, Mandella opted for the Del Mar Handicap. United was second by a head to Red King in that one.

Mandella’s focus is entirely on the Del Mar Handicap this time.

“We’re not on the roll we were last year,” he said.

In the San Clemente, Madone made amends for a no-factor performance from a wide trip in the Honeymoon at Santa Anita on May 22. That race was three weeks after a victory in the Senorita and trainer Simon Callaghan shouldered responsibility for the disappointment.

“I ran her back too soon,” Callaghan said. “She bounced, simple as that.”

Madone’s victory ended a five-race win streak for Going Global, the 2-5 San Clemente favorite. Trainer Phil D’Amato said the Irish-bred filly came out of  the race well and a rematch should be forthcoming in the Del Mar Oaks.

HIGH STAKES NEXT WEEKEND WITH GRADE Is CROSBY AND HIRSCH

Seventeen horses, encompassing virtually all the top sprinters on the West Coast, have been nominated to Saturday’s Grade I, $300,000 Bing Crosby Stakes, assuring that the field will be a stellar one when it is set and post positions are drawn on Wednesday.

Trainer Mark Glatt finished first and third in the 2020 Crosby with Collusion Illusion and Law Abidin Citizen. He has those two plus Dr. Schivel nominated and said Sunday he might run all three.

Other marquis speedsters on the nomination list include 2020 Pat O’Brien winner C Z Rocket for Peter Miller, the trio of Ax Man, Eight Rings and Gamine from the Bob Baffert barn, graded stakes winner Flagstaff from the John Sadler stable and the double quick Cal-bred Brickyard Ride out of the Craig Lewis barn.

Sadler said Flagstaff will skip the Bing Crosby and instead go in the seven-furlong Pat O’Bien here on August 28.

Baffert said the 4-year-old filly Gamine, a winner of six graded stakes in her last seven starts – four of them Grade Is – is more likely to continue competing against her own gender elsewhere than take on males in the Bing Crosby.

But Gamine is one of 11 older fillies and mares nominated to next Sunday’s Clement L. Hirsch, as is stablemate As Time Goes By. A 4-year-old daughter of Baffert-trained Triple Crown winner American Pharoah, As Time Goes By is one of three stakes winners at Santa Anita that are possibles for the Hirsch, a 1 1/16-mile main track event that usually determines the top older filly or mare of the meeting.

The others are Venetian Harbor and Warren’s Showtime.

The Chosen Vron, a winner of two graded stakes during the Santa Anita meeting, tops a field of seven entered Sunday for Friday’s $175,000 Real Good Deal Stakes, a seven-furlong sprint for California-bred 3-year-olds.

A gelded son of Vronsky trained by J. Eric Kruljac, The Chosen Vron has won four of five career starts and comes in on a three-race streak that includes victories in the Grade III Laz Barrera and Grade III Affirmed at Santa Anita.