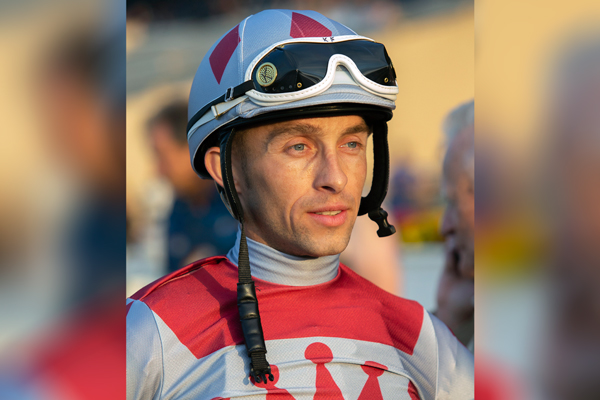 FAST STARTS HAVE UNEXPECTED NAMES HIGH ON THE LEADERBOARDS

Four days into the 82nd Del Mar summer meeting one can find the usual suspects in the upper reaches of the jockey and trainer standings.

There’s Flavien Prat, winner of four of the last five riding titles on top, despite missing a day while on assignment in New Jersey, with seven wins from 24 mounts.

But look just below, or in the trainers’ case to the side, and one finds names that are not quite so familiar to the casual fan.

In a five-way tie for second behind Prat is Kyle Frey, a 29-year-old journeyman from Tracy, CA, who has three wins from 13 mounts. And level with Miller and Baltas is Victor  Garcia, who has gone  3-for-3 to begin the meeting.

Frey notched his first Del Mar stakes victory on Friday aboard I’m So Anna in the $176,000 Fleet Treat Stakes for trainer Steve Sherman and owner/breeders KMN Racing of Kimberly and Kevin Nish of Orlando, FL.

Frey and I’m So Anna out-finished Prat on Teddy’s Barino to  the delight of Steve Sherman’s father Art. The senior Sherman, who trained California Chrome to racing’s highest honors, deputized for his son, who remained at their base in Northern California with four scheduled starters at Golden Gate Fields.

“I love it,” Art Sherman said. “Give the Northern California guys a chance.”

“Northern California guys” have made a summer migration to Del Mar with significant impact for the past three years. First Abel Cedillo in 2019, then Juan Hernandez and Ricky Gonzalez last year. Frey summered at Del Mar a few years ago, but had settled on the Northern California circuit since.

Equibase statistics show Frey in the No. 39 spot for North American jockeys in 2021 with 129 wins from 514 mounts and purse earnings of more than $2.6 million. His career totals: 970 wins from 5,678 mounts and more than $20 million in purses. He’s well on his way to his personal record of 153 wins in a calendar year.

“I was planning on heading back up to Northern California after a week here, but I’m doing so good I must admit I am seriously considering sticking around,” Frey said after the Fleet Treat. “We’ll see.”

Art Sherman said Saturday morning that I’m So Anna may race here again this summer with the Tranquility Lake Stakes at a mile on dirt on August 27 one possibility.

Garcia, 56, has been coming to Del Mar since the late 1980s. He saddled Little Juanito to victory in the seventh race on the opening day of the meeting, July 16, and followed that  with a pair of wins last Sunday – Cute Impact in the fourth and Miss Alegria in the sixth. Little Juanito and Miss Alegria both paid  $6.00 as race favorites, Cute Impact was  a  $63.80 upsetter.

“This is a good start and I hope the luck will keep going,” the conditioner said.

Garcia said he started with eight horses stabled here but lost Miss Alegria for the $20,000 claiming price. The 5-year-old mare was taken by Altamira Racing Stable and Tom Kagele and now is in Miller’s barn.

“I’m looking to claim some, but it’s tough to do here,” Garcia said.

Garcia was born in Tijuana and is a third-generation horseman. His  father, Juan Garcia, was known as  the “King of Caliente” (the now-closed Tijuana racetrack) after winning dozens of training titles there. He has been a Del Mar regular since the late 1980s and has five graded stakes victories in his career. He saddled Smooth Roller to a Grade I win in the 2015 Awesome Again at Santa Anita and registered Grade II or Grade III wins with Approved To Fly and Wait Til Monday in 1988 and ’89.

Going on a winning streak is not new for the Garcia family. “I think my father won five straight in one day at Caliente,” he said.

SADLER EXPECTS TO HAVE A SAY IN BOTH SUNDAY STAKES

Trainer John Sadler will send out defending champion Galilean in Sunday’s featured $150,000 California Dreamin' Stakes and has a three-horse contingent in the $80,000 Daiseycutter Handicap earlier in the program.

At the very least, Sadler’s charges figure to factor strongly in both events as the 64-year-old Pasadena  native seeks to add to his 78 Del Mar stakes victories, second on the track’s all-time list behind Bob Baffert.

Galilean, a 5-year-old son of Uncle Mo owned by West Point Thoroughbreds and partners moved between rivals to get a clear lead entering the stretch and held on for a half-length victory as the 3-2 favorite in last year’s California Dreamin’, a 1 1/16-mile turf assignment for California breds. It was the fourth start in a seven-race 2020 campaign that has netted earnings of $217,098.

Sunday’s title defense, however, is the 2021 debut for Galilean, ending an eight-month layoff since finishing fourth as the favorite in the Cary Grant Stakes in November during Del Mar’s Bing Crosby fall meeting.

Constantia, bred and owned by Keith Abrahams, comes in off a win in the Mizdirection overnight and runner-up in the Grade II Monrovia, both at Santa Anita. Five Pics Please, owned by Desert Sun Stables, has a win, second and third in three starts since joining the Sadler stable for her 2021 campaign.

Bruja Escarlata, which translates from Spanish as “Scarlet Witch,” is owned by Hronis Racing. The 4-year-old daughter of Street Boss, a $185,000 purchase at a Florida sale in 2019, debuted with a victory at Los Alamitos in December and followed with wins on the turf at Santa Anita in February and the dirt there in March.

“Two of the fillies (Five Pics Please and Bruja Escarlata) are pretty fast and the other is a deep closer,” Sadler pointed out. “I think they all fit pretty well in there.”

DESORMEAUX, ESPINOZA EXACTA IS ONE FOR THE AGES

In Friday’s fourth race, Kent Desormeaux guided Order and Law ($20.20) to a three-quarter length victory over Victor Espinoza on Taishan. The combined age of the two jockeys: 100. Desormeaux is 51, Espinoza, 49. The combined number of years enshrined in racing’s Hall of Fame: 21. Desormeaux was inducted in 2004, Espinoza in 2017.

Desormeaux is tied with five others for second in the rider standings, having won three times from 16 mounts. Espinoza has two wins from nine mounts.

Desormeaux, who missed much of  2020 addressing personal issues, is making a comeback after reuniting with veteran agent Tony Matos.

“He’s riding great isn’t he,” Matos said Saturday morning. “It’s like the old days when I had him before. I won two Kentucky Derbies with him (Real Quiet 1998, Fusaichi Pegasus 2000) and he’s riding as good as ever.”

Mike Smith, just over two weeks away from turning 56, sets the standard for fitness for jockeys of any age, let alone 50-somethings. But Desormeaux, Matos contends, isn’t far behind.

“He’s as fit as anybody,” Matos said. “He’s strong. The two (winning) rides he put up (Friday)? Only he could have won on those two horses.”