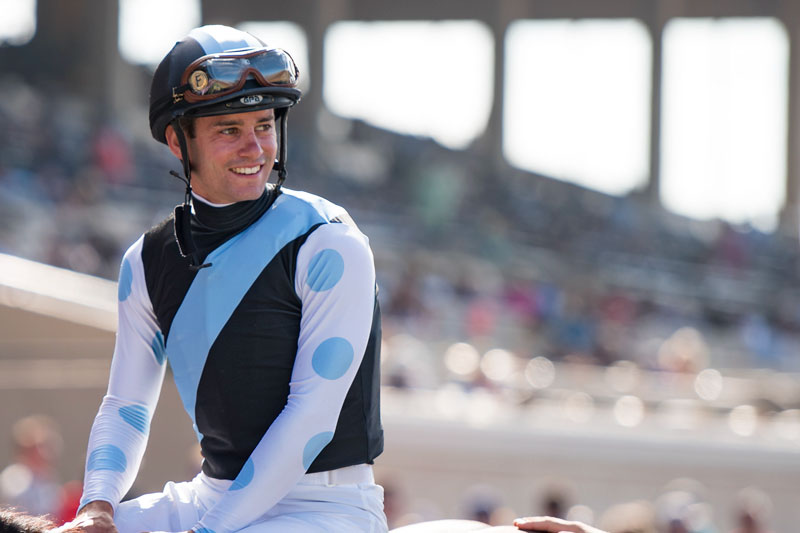 Flavien Prat, the riding champion four of the last five years, has mounts booked for all 10 races as Del Mar opens its 82nd summer season today.

Soon after the last one he’ll catch a plane for New Jersey for Saturday’s Haskell Invitational Day at Monmouth Park and an assignment on 6-5 morning line favorite Hot Rod Charlie in the $1 million featured race of the day.

Then it’s another flight back to the West Coast where he’s got eight to ride on Sunday’s 11-race card here.

He must be able to sleep well on airplanes.

The native of France, less than three weeks away from his 29th birthday, has made the  West-to-East-to-West quick turnaround many times before, of course, as his star has risen nationally. And he figures to do it again this summer.

It happens when you’re the No. 4 rider for money earnings in the country – 132 wins from 485 mounts and more than $10.8 million in purses, an impressive 27 percent win and 65 percent in-the-money rate. It happens when you’re fresh from recording the second Triple Crown victory of a career brought to the U.S. just six years ago – Rombauer in the Preakness to go with Country House (via disqualification) in the 2019 Kentucky Derby.

The questions are: How often will these trips happen this summer? And what affect will they have on the quest for another Del Mar riding title? He shared the crown with Rafael Bejarano with 38 wins in 2016, and won it outright in 2017 (35), 2019 (42) and last year  (50). The 2020 title was decided on the last day of the meeting by one over first-year Del Mar rider Umberto Rispoli.

Prat laughed at the idea that, with his increasingly high profile, he might be obliged to ride more premier stakes on the East Coast.

“I’m under no obligation, no one’s making me (travel),” Prat said Friday morning, walking the Del Mar stable area en route to riding a workout. “But if the opportunities arise, I may.”

But when he’s here, Prat figures to maintain the all-business attitude and work ethic that produced the most riding wins in eight years last summer at Del Mar and 124 more in the December-to-June Santa Anita meeting.

“My focus is not on the competition,” Prat said. “It’s always on the horses I ride and doing the best I can with them to win as many races as possible.”

IT’S IN THE CARDS: HORSEMEN SHOW A LOT OF SUPPORT FOR DEL MAR

The weeks of preparation, capped by three intense days of final touches, ended Thursday for Del Mar Thoroughbred Club Racing Secretary David Jerkens and his staff with the completion, posting and distribution of Sunday’s racing card.

One (three-day) week in the books. Seven to go.

Today’s 10-race program, with a total of 106 entries, not counting those on also-eligible lists, will be followed by an 11-race card on Saturday with 109 runners and an 11-race menu on Sunday with 97 designated to participate.

Before scratches, that calculates to 312 horses for 32 races, or 9.75 per race. Equibase statistics show the average field size at North American tracks ranging from 7.5 to 7.89 over the last nine years. Del Mar has consistently been at eight or above during that span, said Jerkens, who has held the Racing Secretary title since 2014.

“We’re very pleased with the early results,” Jerkens said. “The break of more than a week in racing (the Los Alamitos meeting ended July 4) was a significant factor, and we have a fresh pool of turf horses since Santa Anita ended (June 20).

“Owners and trainers have been very supportive of Del Mar over the years and they have been once again.”

The Del Mar numbers have been enhanced, and Jerkens has been encouraged, by participation from trainers not headquartered in Southern California. The “Ship &  Win” program, which pays bonuses to horses from outside California, has been a major contributing factor along with an enticing purse structure and the general lure of San Diego and one of the premier racing facilities in the country.

“We have more stables than we’ve had in a while,” Jerkens said. “The Ship & Win program has been successful and the fact that we’re hosting the Breeders’ Cup in the fall is another reason to come out and maybe stay through (November 3-4).”

Trainers Mark Casse and Mike Maker, both highly regarded in national and even international circles, have expanded their summertime strings here for 2021. Casse has stalls for 20 horses and Maker 26 in the stable area. Maker-trained stakes winner Mo Mosa is entered in Saturday’s Grade II, $250,000 San Diego Handicap.

Dispatching smaller contingents are Ron Moquett, in from the Midwest; Todd Fincher, a top conditioner based in New Mexico, James Chapman, William Morey and Matt Shirer.

Horse vans continue to roll into the stable area and Jerkens expects the equine population there to be in the 1,850 to 1,900 range.

There are no illusions about maintaining the average field size of the opening weekend through the entire meeting. But Jerkens points to the 8.4 average in last year’s COVID-restricted summer meeting.

“That was very robust these days and under the circumstances the meeting went as well as you could ask for,” Jerkens said. “We make it a priority to put out the best racing product we can for the fans and the bettors every year.”

TIZAMAGICIAN PICKED TO DO THE TRICK IN SUNDAY’S COUGAR II

Tizamagician, a 4-year-old son of Tiznow owned by MyRacehorse or Spendthrift Farm and trained by Hall of Famer Richard Mandella was installed as the 8-5 morning line favorite in field of six by track oddsmaker Jon White for Sunday’s Grade II, $100,000 Cougar II Handicap.

The 1 ½-mile marathon often identifies a starter or two for the meet’s signature race, the $750,000 TVG Pacific Classic, and was the stepping stone for Richard’s Kid’s surprising win in 2009.

Tizamagician returned to Southern California following a runner-up effort in the Grade II Brooklyn Invitational Stakes at Belmont Park in June. Before that, he was a romping 9-length winner in the Grade Tokyo City Cup at Santa Anita in April. The Cougar II will be the third straight 1 ½-mile race for  Tizamagician.

Two overnight stakes, each at a mile on the Jimmy Durante Turf Course and offering an $80,000 purse, figure to add intrigue and challenge handicappers to the Saturday and Sunday programs.

The Osunitas, for older fillies and mares, goes as the 9th on an 11-race card and drew a field of nine with Michael McCarthy-trained Brooke the 5-2 morning line favorite. The Chilean-bred will be making her third U.S. start and comes off a third-place finish behind Warren’s Showtime in the Grade III Wilshire.

Sedamar,  owned by Ruis Racing of San Diegans Mick and Wendy Ruis and trained by their daughter, Shelbe, is listed at 4-1. It will be the eighth Del Mar start for the 5-year-old mare, a daughter of Richard’s Kid who has accounted for $163,354 of  $296,722 career earnings at the seaside track.

Sunday’s Wickerr, for older males, attracted a field of eight with Peter Miller-trained Neptune’s Storm the 8-5 morning line favorite. The 5-year-old gelded son of Stormy Atlantic has six wins in 20 lifetime starts and career earnings of $868,085 with $144,000 of that coming from Del Mar turf races.

As a 3-year-old in 2019, Neptune’s Storm was second in the La Jolla Handicap and third in the Del Mar Derby during the summer season and came back in the fall to finish second to Mo Forza in the Grade I Hollywood Derby. He was third in the 2020 Eddie Read.

CLOSERS – Sure sign that racing’s really back: 177 horses on the Friday morning work tab … Winner of the Racing Office Appreciation Award for opening day: Team Doug O’Neill. While the trainer was back in New Jersey preparing Hot Rod Charlie for tomorrow’s $1 million Haskell, the crew back here entered 10 horses – singles in races 1,2,4,7, 8 and 10, doubles in 6 and 9.