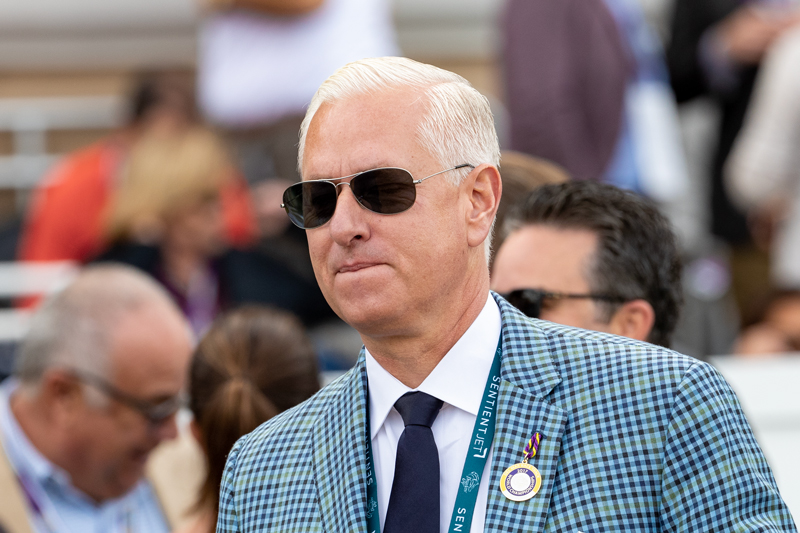 The first of the two Grade 1 races slated for closing weekend at Del Mar has attracted a number of out-of-town shippers from some of the most successful barns in horse racing. The G1 Hollywood Derby is scheduled for Saturday and a field of 11 horses has entered the 1 1/8 mile turf event.

Todd Pletcher, Graham Motion, and Shug McGaughey have sent horses from their east coast bases for the final major ‘Derby’ of 2022.

Pletcher will start Wit, a 3-year-old son of Practical Joke, owned in part by Mike Repole, a leading owner in New York. The colt won the G3 Bay Shore at Aqueduct in April followed by a rough fourth-place finish behind Jack Christopher in the G1 Woody Stephens on the Belmont Stakes undercard. Wit finished second in the G2 Hall of Fame and won the $135,000 Better Talk Now, both at Saratoga this summer, before missing by a neck to Balnikhov in the G3 Bryan Station at Keeneland.

“It’s a grade one so you travel wherever you need to travel for a grade one,” assistant trainer Emily Green says. “He’s always a hard trying horse. He gives his all every time. He’s easy going, he’ll do whatever you want him to do.”

“He came over here with a lot of energy,” she says. “We walked him the first day and then he started his training. High energy, he couldn’t be doing much better.”

Trainer Shug McGaughey is sending Celestial City, a 3-year-old son of Uncle Mo, to the Hollywood Derby. He’s won two in a row including the G2 Hill Prince at the Belmont at Aqueduct meet last month. Prior to that, Celestial City won an entry level allowance. This summer at Saratoga, the colt ran third in the G2 Hall of Fame and second to Annapolis in the G3 Saranac.

“It’s pretty good spot for him,” McGaughey says. “He wants to run a distance of ground. It’s the last chance for a grade one for straight 3-year-olds and he’s doing pretty good right now so we’re taking a chance.”

“His races have been pretty consistent all year,” he says. “He’s run against some pretty good horses, like Annapolis. He came back in the Hill Prince and Jose (Lezcano) let him find his way and he finished up really strong. Hopefully that will be the same scenario this time.”

Graham Motion has been running horses at Del Mar throughout the Bing Crosby meet and will start three in the Hollywood Derby including Script, who missed by a nose in the $75,000 Let It Ride Stakes on opening weekend. The colt came with an impressive turn of foot down the lane but got the worst of the head bob.

His stablemate, Speaking Scout, will also run in the Derby. The son of Mr. Speaker won the $100,000 Hawthorne Derby in Chicago last month by five lengths. He then ran second to Cabo Spirit in the G2 Twilight Derby at Santa Anita.

“He stayed out here from when he ran at Santa Anita,” Clapham says. “He shipped down here and breezed on the turf course last week and hopefully he’ll run a big race, too.”

The third Graham Motion entry is Evan Harlan, who broke his maiden at Belmont at Aqueduct last out.

The local contingent in the Hollywood Derby is a formidable one led by Cabo Spirit, now a multiple graded stakes winner. In addition to winning the Twilight Derby, he also won the G3 La Jolla at Del Mar this summer.

There’s also Spycatcher from the Mark Glatt barn; the Ron Ellis trained War at Sea; and Handy Dandy, winner of the Let It Ride.

The Hollywood Derby dates back to 1976 and was run every year at Hollywood Park until the track closed in 2013. The first year it was run at Del Mar in 2014 it was won by California Chrome. It’s the ninth and final race of the stakes packed Saturday card at Del Mar. First post is at 12:30 p.m.

The newest addition to the Fall Turf Festival at Del Mar will be run Saturday when eight horses line up for the $100,000 Stormy Liberal turf sprint. It’s part of the trio of stakes offered on the card.

Trainer Richard Mandella was set to bring a nice one-two punch to the dance but he decided to scratch the morning line favorite, Lane Way, saying he wasn’t happy with the way the horse was going right now. So instead he will leave the son of Into Mischief in the barn and bring Sumter, who is back from Kentucky where he ran 10th in the G2 Franklin Simpson at Kentucky Downs.

“I don’t know what happened there,” Mandella says, “he just didn’t run his race at all. But he’s training very good for this one.”

Before that trip east, Sumter was a force to be reckoned with, winning both the $100,000 Pasadena Stakes and the $100,000 Singletary at Santa Anita. The son of War Front then ran a respectable third in the G3 La Jolla at Del Mar.

Trainer Philip D’Amato is bringing three of his horses to the Stormy Liberal. Rebel Posse last ran at Lone Star Park this summer. Turn On The Jets has run three times in the States since coming across the pond from Ireland and has finished in the money in all three races. Coulthard is another Irish import who ran third in the G3 Green Flash at Del Mar this summer and fourth in the Eddie D.

Mark Glatt’s Whatmakessammyrun is coming off of a big win in the G2 Eddie D last out at 18-1. The son of We Miss Artie had not won a race since June of 2021, spanning seven races.

The Stormy Liberal is named after the champion sprinter who won the Breeders’ Cup Turf Sprint in back-to-back years, in 2017 at Del Mar and in 2018 at Churchill Downs. It’s the fifth race on the nine-race card.

Some of the best juvenile filly grass runners on the grounds will be on display Saturday in the G3 Jimmy Durante turf mile at Del Mar. A field of 12 will go to the post.

Trainer Bob Hess, Jr. will send out Showgirl Lynne B, a well-traveled filly who won the first three races of her career. She broke her maiden at Gulfstream Park in July and followed with a win in the $60,000 Sharp Susan. Hess then shipped her to Kentucky Downs where she won a restricted allowance. Bustling with confidence, they shipped her up to Aqueduct and she was soundly beaten in the $120,000 Stewart Manor Stakes.

“I think the trip to New York from Florida zapped her,” Hess says. “She’s been at Del Mar for about a month. She’s happy and will fire her best shot.”

Showgirl Lynne B is stretching out around two turns for the first time in the Jimmy Durante.

Sell the Dream returns to the turf following her fourth-place finish in the $175,000 Golden State Juvenile Fillies at Santa Anita last out.

“We stayed home for the Cal-bred race just to see if she could take one more shot with dirt,” trainer Brian Koriner says, “and I guess there was a reason we started with her on the grass the first time.”

Prior to that race, the daughter of Munnings put together back-to-back runner-up finishes against stakes company on the turf at the one mile distance. She finished second in the Juvenile Fillies Turf at Del Mar in the summer and followed that with a second in the G3 Surfer Girl last month at Santa Anita. She was beaten both times by the highly regarded Comanche Country.

Another stakes winner is Quickly Park It, from the Sean McCarthy barn. She won the $75,000 Pike Place Dancer by six lengths at Golden Gate Fields last month. That race was also one mile on the turf.

“She ran a super race,” McCarthy says, “and she’s doing as well as she was going into that race. We’re cautiously optimistic, I think she’ll run very well.

The lightly raced 2-year-old broke her maiden at Del Mar last August going a mile on the grass and McCarthy says it helps knowing she likes the track.

“It might be a little different track than it was in the summer,” he says, “but, that being said, she’s pretty handy so she should handle it fine.”

Trainer Chad Brown has also shipped-in a filly. Liguria broke her maiden last out at the Belmont at Aqueduct meet. It was the daughter of War Front’s second career start.

“She’s a promising prospect,” Brown says. “She really got it together in her last start and finished off the race impressively. A bit of a cutback to a mile but she’ll appreciate the firm ground at Del Mar.”

The Jimmy Durante is named after the popular actor, singer and comedian. It’s the seventh of nine races on the Saturday card. First post is at 12:30 p.m.

The final “Daybreak at Del Mar” session will be held tomorrow starting at 8 and finishing at 9:30 a.m. at the Clubhouse Terrace restaurant on the second floor of the track’s Clubhouse section.

Jockey Jessica Pyfer, who was voted an Eclipse Award as the nation’s top apprentice rider in 2021, hosts the event with comments on horses out on the track and her experiences as a rider, as well as answering questions about racing from fans in attendance.

The “Daybreak” sessions are free to all who are encouraged to enter through the main gate and park in the main lot, then walk forward to the Turf Club/Clubhouse entranceway to the track. There is a full breakfast selection available for order at one of the serving stands near the restaurant.

Del Mar’s free weekend handicapping seminars – which are presented throughout the fall meet – will be offered for the last time at the sessions on Saturday and Sunday in their spot on the patio of the Hacienda Room just off the Plaza de Mexico.

Both sessions will be held starting at 11:35 a.m. and running until approximately 12:05 p.m. Guest handicappers will speak on the day’s race card and share their selections and thoughts.

A pair of old pros – Frank Scatoni (Saturday) and Dan Smith (Sunday) -- will host the sessions.

Scatoni’s guest will be a veteran handicapper and the man behind the popular “The Money Media Podcast” – Peter Fornatale. Smith will team up with Daily Racing Form/Equibase’s veteran chart caller/maker Ellis Davis on Sunday.

COOLING OUT:  Jockey Florent Geroux is back at Del Mar this weekend to ride in the Fall Turf Festival. Geroux, who rode for a few weeks at the seaside oval this summer before returning to the Midwest, has four mounts on Saturday including Bizzy Gal in the G3 Jimmy Durante and Handy Dandy in the G1 Hollywood Derby.