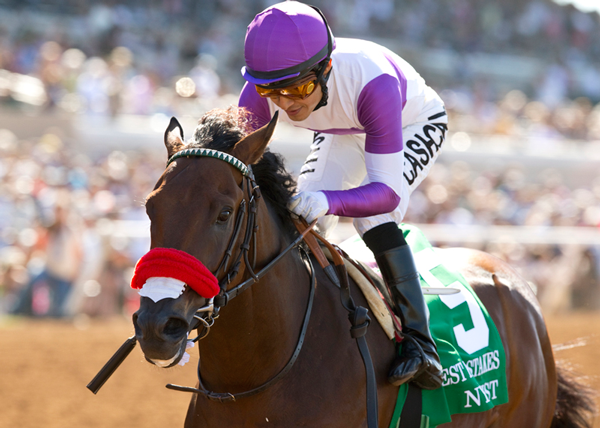 By Hank Wesch
NYQUIST’S NO.  1 WITH O’NEILL AND POSSIBLE FUTURITY SINGLE
Trainer Doug  O’Neill reported that Nyquist, winner of Saturday’s Grade II $200,000 Best Pal Stakes, came out of the  race “great,” and with the possibility of being the stable’s lone representative in the Grade I $300,000 Del Mar Futurity on Closing Day, September 7.
Which would be a little surprising considering the depth of 2-year-old talent in O’Neill’s barn.
On Wednesday O’Neill saddled  Mrazek and Ralis to a 1-2 finish in the $100,000 Graduation Stakes for California-breds. Nyquist was a 5 ¼ length winner in the Best Pal, stablemate Found Money a distant fifth of  six.
“I think it’s safe to say he’s the best of our 2-year-olds,” O’Neill said after the Best Pal. “Physically and mentally he’s our best. If he stays injury-free, he’s got the mind of a champ.”
Sunday morning, O’Neill said that if all goes to plan: “He would be our lone entry in the Futurity. But we’ll talk it over with Mr. (owner J. Paul) Reddam and decide. We’ve got  a lot of good 2-year-olds and we want to keep them apart.”
The win by Nyquist was the ninth of the meeting for Reddam, who is halfway to the record for an owner in a single meeting set by Marion R. Frankel in 1973.
Best Pal runner-up Swipe came out of the race well, said Joasin Diego, assistant to trainer J. Keith Desormeaux. “These young horses get over (races) quickly, he’ll be  kicking and playing in a couple days.” Regarding Futurity plans previously expressed by Desormeaux, Diego said “I don’t think it will change.”
Nyquist went 6 ½ furlongs in 1:16.84. Two races earlier Young Brian, a 2-year-old son of Hard Spun out of the barn of trainer Phil D’Amato, covered 6 ½ furlongs in 1:17.00 winning by 10 ¼ lengths under Rafael Bejarano.
Young Brian, owned by John M. Liviakis, is Futurity nominated.
WE MAY NOT HAVE SEEN THE LAST OF MABEE WINNER ELEKTRUM