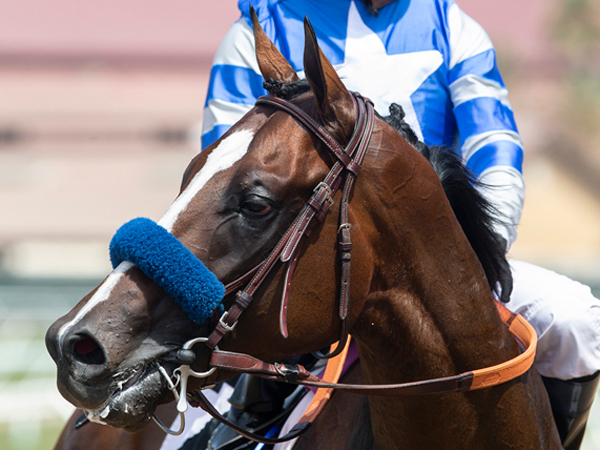 Hall of Fame trainer Bob Baffert sent out Gamine and Thousand Words, bound for next week’s Kentucky Oaks and Derby, respectively, for final workouts this morning.

Gamine, a brilliant winner of the Test Stakes at Saratoga on August 8, is expected to vie for favoritism with Swiss Skydiver in Friday’s $1.25 million, Grade I Kentucky Oaks for 3-year-old fillies.

With Juan Ochoa in the irons, the daughter of Into Mischief owned by Michael Lund Petersen covered six furlongs in 1:11.60. Clocker Toby Turrell had interim splits of :24.40, :36.60 and :59.40 and commented she “exploded brilliantly.” Gamine’s workmate, Quality Response, a 3-year-old stakes-winning filly, was timed in :48.00 for a half-mile.

“She worked beautifully,” Baffert said. “She’s coming into the race very well and I’m very happy with her right now. It’s going to be a tough race, very competitive, but we’re excited and she looks ready for it.”

Storm the Court, whose 2019 Breeders’ Cup Juvenile victory earned an Eclipse Award in the 2-year-old male division, worked six furlongs in 1:12.80 with the final half mile in :47.60 under exercise rider Austin Solis.

“A good work, all we were looking for,” trainer Peter Eurton said. “If he comes out of it well, we’re headed East.”

The West Coast contingent to the Kentucky Oaks and Derby is booked to ship Monday. John Velazquez rides Gamine and Baffert’s top Derby contender Authentic, Florent Geroux has the call on Thousand Words and Julien Leparoux is slated to ride  Storm the Court.

GENEROUS PORTION DOUBLE WOULD BE PERFECT FOR BERNARD & FILLY

Trainer Lisa Bernard saddled Governor Goteven to a victory in the CTBA on August 1 that was both the first stakes victory of her burgeoning career and first at Del Mar.

Cause for a celebration that current circumstances rendered low key.

“There was nothing (in terms of major restaurants) open so we just went and had tacos,” Bernard said Friday by telephone. “But the feeling was pretty fantastic. It was wonderful.”

Bernard, 37, hopes to reprise the feelings when she sends Governor Goteven out to face six rivals in Sunday’s $100,000 Generous Portion Stakes for 2-year-old California-bred fillies.

Governor Goteven was prominent from the start and pulled away in the final furlong for a 3 ½-length victory in the CTBA to go 2-for-2 in her career. She’s the only starter during the meeting for Bernard.

Since the CTBA,  Governor Goteven, a daughter of  Govenor Charlie out of the Time to Get Even mare Linda Goteven, bred and owned by Templeton Horses, has had two works over the surface. The most recent, a week ago today, was a half-mile in :47.20, third-best of 74 at the distance.

“She knows her job, knows what she needs to do,” Bernard said. “It has clicked in for her and you can tell she knows she won and she’s proud of herself. Fillies are like that; they take things to heart.”

The 6 furlongs of the Generous Portion represent another step for Governor Goteven, whose wins have come at 4 ½ and 5 furlongs. In Bernard’s estimation the added eighth of a mile  should not be a problem.

“I’ve always felt she needs to go longer,” Bernard said. “She’s a big filly who needs to get her feet under her and get in her best stride. There’s more speed in this race than we expected, but she doesn’t have to be up front, she can come from off the pace.”

Bernard, a native of New Hampshire, started riding when she was 10 years old and has been around horses, especially Thoroughbreds, ever since. Her passion, she said, goes beyond racing to retraining retirees for second careers as jumpers or in other capacities. She has five runners in training at San Luis Rey Downs and works with retirees and others at Terry Lovingier’s Lovacres Ranch in Warner Springs.

Bernard came to California 3 ½ years ago and was mentored by Walther Solis, who trained out of San Luis Rey. Bernard took over Solis’ stock when he retired from training last year for a position at Lovacres Ranch.

Also among the field is Mucha Woman, a $2,000 purchase at a 2019 California yearling sale who, with a victory in an August 14 maiden race at Del Mar, has earned $22,500. She is trained by Sal Gonzalez for Tricar Stables.

It will be the fourth career start for the daughter of Empire Way bred by (you guessed it) Lovingier.

“The first time she ran she was a little green,” Gonzalez said. “Then I ran her in a maiden $50,000 here (July 24) and she stumbled coming out of the gate and grabbed a quarter. So we had to take care of her and get her mended.

“Then we got her ready to run again for maiden $50,000 and she won easy (by 7 ½ lengths). So she’d getting better as we go along and I think she will perform well on Sunday.

“I don’t like the post position (No. 1), but that’s what she drew, so we deal with it. We have high hopes for her and I think she’ll be even better going a mile.”

The dead-heat for the win between Proud Emma and Message in Friday’s Tranquility Lake was the first in a stakes event at Del Mar in nearly a half-century and only the third all-time at the track.

The first such occurrence was in the 1968 Del Mar Derby, when Prince Hemp and Glory Hallelujah couldn’t be separated by the photo-finish camera. The most “recent” was in the second division of the 1973 Rancho Bernardo when the co-winners were Dollar Discount and D.B. Carm.

The dead-heat victory in a stakes was the first for Hall of Fame trainer Bob Baffert, who has been winning them at Del Mar, and lots of other Thoroughbred places, for over three decades.

It was also a first, and a double-dip benefit for jockey Flavien Prat, aboard Message for Baffert.

It was the 11th stakes win of the meeting for Prat, two short of the track’s single-season record for jockeys with eight more black-type events on the calendar. It also moved Prat back into a tie with Umberto Rispoli atop the rider standings with 36 wins each.

Through the first 19 days (Sunday, August 23) of the current Del Mar season, weekend wagering (Saturday and Sunday) on the Late Pick 5 and the Pick 6 have been husky and hearty despite the fact that – other than a handful of owners -- the track does not have fans in the stands.