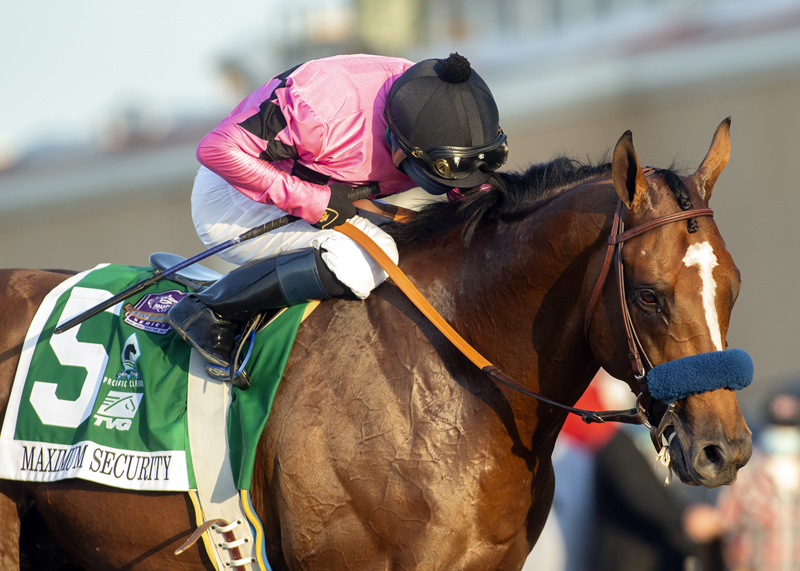 As an example of the strength and fitness of Maximum Security, Hall of Fame trainer Bob Baffert pointed out that the $12 million-plus (in earnings) horse was not breathing deeply as he returned to pose in front of the infield board following his victory Saturday in the Grade I, $500,000 TVG Pacific Classic.

This after running 1 ¼ miles in 2:01.24, leading wire-to-wire and putting an easy three lengths between himself and runner-up Sharp Samurai at the finish.

Trackside today, Baffert related how the 4-year-old son of New Year’s Day practically dragged handlers back to the barn Saturday evening and was fine in the morning light. Baffert also said that as gratifying and emotional as the TVG Pacific Classic win was – it brought tears to the eyes of owners Gary and Mary West – it was not the most impressive of Maximum Security’s two-race Del Mar tour de force.

“The most impressive race was the San Diego (Handicap, July 25),” Baffert said. “He was inside, got stopped, had to overcome trouble and a slow track and still won.”

Comparatively, the Pacific Classic, Maximum Security’s second start for Baffert and second with Abel Cedillo in the irons, was a day at the beach. From an outside, five of six, post Maximum Security broke alertly and Cedillo was able to get positioned on the lead, near the rail and never relinquish it.

The inevitable next questions: what and where for his next start and will it be at a place where Cedillo or Luis Saez will ride, will be left for another day. Post-TVG Pacific Classic, Baffert had mentioned the Jockey Club Gold Cup at Belmont Park on October 10 as a prelim to the Breeders’ Cup Classic – the TVG Pacific Classic was a “Win and You’re In” qualifier – in November at Keeneland. But he’s not making any commitment.

Mark Glatt, trainer of TVG Pacific Classic runner-up Sharp Samurai, said the 6-year-old gelding, making only his fourth start on dirt in a 21-race career, also came out of the race in good order. Sharp Samurai was entered in both the Classic and today’s Grade II $150,000 Del Mar Mile on grass and opted to go in the Classic.

“I don’t have a crystal ball and he would have been tough in the race today,” Glatt said Sunday morning. “But we (now) know he can run on dirt and that gives us a lot of options.”

The victory by Red King in Saturday’s Grade II, $200,000 Del Mar Handicap brought attention to the rise of Phil D’Amato in the trainer standings and the increased success of his stable after a chilly start.

With one win Friday and two Saturday – the D’Amato/Umberto Rispoli combination followed up the Handicap victory with Salvator Mundi ($11.20) in the 11th  race nightcap – D’Amato now has 14 wins from 60 starters and only trails Peter Miller by one on the leaderboard.

“Things have been clicking well the second half of the meet,” D’Amato said via text. “All those horses that finished second and third at the beginning of the meet have been able to come back and win. That really helps.

“Also, the ability to breeze turf horses on the turf here at Del Mar has really helped. I think it keeps the grass horses happier and they perform better in their races.”

Red King, a 6-year-old son of English Channel bred by Calumet Farm and owned by Little Red Feather Racing, had five works on the Del Mar turf leading up to his first start since a June 21 victory in the San Juan Capistrano at Santa Anita.

Given a masterful ride by Rispoli, Red King was able to pull off a $10.60 upset of heavy favorite United. The Handicap, sponsored by the Japan Racing Association, is a “Win and You’re In” qualifier for the Breeders’ Cup Turf in November at Keeneland.

While she had been competitive in graded stakes before, it took a bit of a leap of faith to think that Red Lark, an Irish-bred filly with only a maiden win on her 11-race record, could triumph in the Grade I, $250,000 Del Mar Oaks on Saturday.

But Red Lark, jockey Drayden Van Dyke and trainer Paddy Gallagher rewarded those who made the leap, among the Eclipse Thoroughbred Partners ownership group and otherwise, to the tune of $40.20 on Saturday.

“I had confidence in the filly; I knew she was happy and all, but I didn’t know if she was good enough,” Gallagher said. “She needed to run the race of her life and she did.”

Aron Wellman, founder of the Eclipse group, got to point out in a post-race interview on TVG how special it was for partners, whose only recourse was to follow their horses remotely for several months, to be there in person.

On August 13, a day after the passing of venerable trainer Mel Stute,  Daily Racing Form correspondent Jay Privman sent out a message on Twitter that said:

“Mel will get into the Hall of Fame one day. A historic review committee sometime in the future will look at his record, wonder how he never got in and do the right thing. The incredibly sad thing is this should have happened when he was alive to rightly enjoy it.”

On that day, three Del Mar-based Hall of Famers will be glad to have Stute as part of the club. They talked about Mel recently:

Richard Mandella: “Should Mel Stute be in the Hall of Fame?” Mandella asked rhetorically. “I would say yes. He won Breeders’ Cups, he won the Preakness, he trained horses successfully for more than 50 years. That all sounds pretty good to me.”

It is noteworthy that – in one of his darkest moments in the game – Mandella called on some Stute wisdom in an attempt to explain and understand what he had just gone through.

Mandella quoted Stute when he met the press in Louisville the morning after he had to scratch Kentucky Derby favorite Omaha Beach just days before the 2019 Run for the Roses:

“I’m remembering a line from Mel Stute,” Mandella recalled. “He said: ‘I have a lot of experience with disappointment. This game will do that to you.’ He was so right.”

Hall of Fame trainer Jerry Hollendorfer said he talked to Mel’s son after his father’s passing and told him: “Gary, maybe in a million years there will be another one like him. Maybe.”

Hollendorfer also noted that his wife, Janet, who oversees his Northern California stable, worked as a groom for Mel for several years.

Hall of Famer Bob Baffert said of Stute’s absence from the place of honor “I know it bothered him.” Baffert also expressed great respect for Stute and his brother Warren.

“When I was first starting and only had like three horses here, Mel would see me walking (in the stable area) and pull up and give me a ride,” Baffert said. “And then, about every time, he’d pop in a cassette that had the song about Snow Chief on it and play it …

“Anybody can get lucky and have some success for awhile, but to do what he did – from claimers to stakes horses – to have that consistency for so many years, it shows what a great horseman he was.”

Sean Espino from nearby Solana Beach took a swing Saturday in Del Mar’s Pacific Classic Betting Challenge. He hit it out of the park.

In the day’s 7th Race, the regular tournament player put 4-1 shot Red King on top of odds-on favorite United in the Del Mar Handicap and played the one-way exacta for $1,000.  When it hit, he collected $12,200.

That was enough to make him the winner of the “live money” Challenge that required players to put up $4,000 with $3,000 of it wagered throughout the afternoon and the other $1,000 placed in the prize pool.

So besides his take home tally of $12,070 at the end of the day, Espino also collected $50,000 for proving best in the 150-player contest that was conducted through TVG.com. It was the first time the Challenge was held on-line.

Further, the top five finishers in yesterday’s Challenge won free admission into the Breeders’ Cup Betting Challenge (a $10,000 value to each), which offers $1-million in cash prizes.