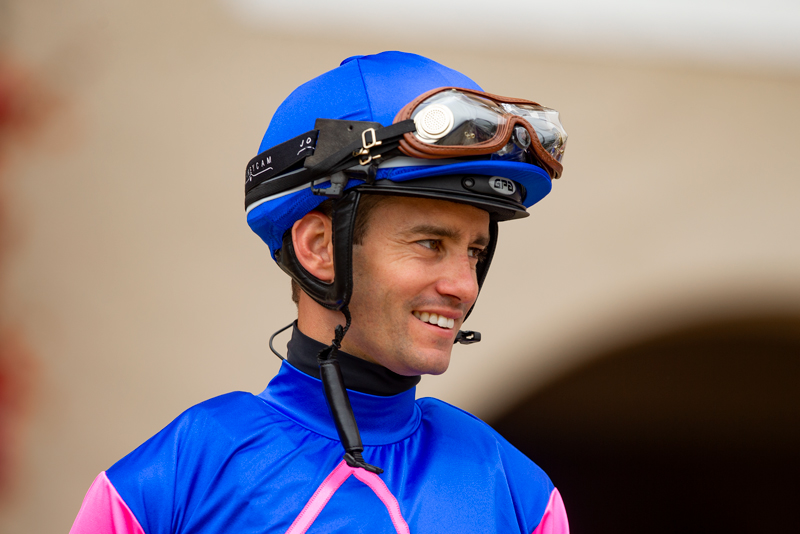 PRAT SITTING IN THE RIGHT SPOTS FOR RUNS AT TITLE, STAKES MARK

With two wins yesterday, Flavien Prat increased his lead from four to six victories over Abel Cedillo and five to seven over Juan Hernandez atop the jockey standings entering the final 11 days of the 31-day meeting. Prat is looking to make it three straight riding titles at the summer meeting and five of the last six either taken outright or shared.

Prat has recorded six stakes victories, working toward the record 14 stakes in a season he established last year.

And, in terms of quantity and quality, the 29-year-old native of France appears positioned to advance toward both those goals with his mounts on the TVG Pacific Class Day program that is the annual highlight of the season.

Prat has mounts scheduled in all 11 races, five of which are stakes. In the six non-stakes events he is booked on two morning-line favorites – Barbwire (5th, 3-1) and Dream Shake (8th, 7-2) -- and has no mounts  higher than 4-1 in the early odds. During the run of five stakes in six races, here are Prat’s runners on oddsmaker Jon White’s morning line:

Of course, all that stands in the way of Prat’s success today is 83 other horses and 22 other riders intent on success of their own.

BAFFERT ON MEDINA SPIRIT: “I’LL LET HIM TELL ME” WHAT’S NEXT

The rumors on the backstretch were too persistent to ignore. Hall of Fame trainer Bob Baffert, they said, was going to run Kentucky Derby winner (pending rulings and litigation) Medina Spirit in the $100,000 Shared Belief Stakes, a mile main track event for 3-year-olds here on August 29.

“He’s going to breeze this week and I’ll know more after that. I go work-by-work with him. I’m looking at the Pennsylvania Derby, maybe as an option. (The question becomes) Do I give him a race here? I’m going to let him tell me, the horse will let me know.”

Medina Spirit was not among the 14 nominated for the Shared Belief by Thursday night’s deadline. Santa Anita Derby winner Rock Your World notably was, and trainer John Sadler said that will be the next assignment for the son of Candy Ride. Supplemental entries, at a cost of $1,000, can be made up to closing time of entries next Friday morning.

The $1 million Pennsylvania Derby, a 1 1/8-mile test for 3-year-olds, is set for September 25 at Parx, formerly Philadelphia Park.

Classier, another of Baffert’s talented 3-year-olds, worked six furlongs in a bullet  1:11.00 this morning and will run here in either the Shared Belief or next Saturday’s $200,000, Grade II Pat O’Brien Stakes, a seven-furlong extended sprint for 3-year-olds and up.

Yet another Baffert standout, Gamine, worked six furlongs in 1:12.00 with an eye toward next week’s Ballerina at Saratoga and Baffert’s As Time Goes By, a winner of two stakes at the Santa Anita meeting, covered five furlongs in a bullet :58.80.

Our annual random survey of media selections, in no particular order, with comments, for today’s TVG Pacific Classic. Unlike 2020, some of them were even collected in person.

Kevin Modesti, Southern California News Group: Royal Ship – “Will be in the fight in 10th furlong.”

Toby Turrell, Clocker: Royal Ship – “His switch is ‘on.’ Loved his last work.”

Jennie Rees, JR Communications, Kentucky:  Tizamagician – “Sentimental choice with the passing of co-owner B. Wayne Hughes is still a good one.”

The Green Flash, a 5-furlong sprint over the Jimmy Durante Turf Course, is the last of seven graded stakes presented during the three-day Pacific Classic weekend with combined purses totaling $1.95 million.

Gregorian Chant, a 5-year-old English-bred gelding, took a three-race winning streak at Santa Anita to Belmont Park in New York for the Grade I Jaipur on June 5 and, after being forwardly-placed early in the 6-furlong turf sprint, tired and finished seventh of nine.

“I don’t think it was as much the (listed ‘good’) turf as the tactics,” trainer Phil D’Amato said. “He likes to come from off the pace and we wound up dueling with the co-favorite on the lead.”

Brought back to the West Coast and given a break, Gregorian Chant has had five turf works here since the July 16 start of the meeting.

“We freshened him up with this race in mind,” D’Amato said. “We’ll see if the distance is good for him for the Breeders’ Cup.”

The $1 million Breeders’ Cup Turf Sprint will be run over the same course on Saturday, November 6.

1991, 30 Years Ago – Best Pal wins the inaugural for owner/breeder/DMTC patriarch John Mabee, who championed a $1 million race from the start.

1996, 25 Years Ago – 44,181 on hand are stunned as Dare And Go upsets Cigar, foiling an attempt to break Citation’s record 16-consecutive-wins streak.

2011, 10 Years Ago – Acclimation wins under Patrick Valenzuela, who gets his second Pacific Classic victory 20 years after the first on Best Pal.

2016, 5 Years Ago – California Chrome bests Beholder and Dortmund in what was widely considered “the race of the year.”

“MANDATORY PAYOUT” SATURDAY COULD CAUSE BET RECORD TO FALL

Del Mar’s single-day betting mark (not counting the two Breeders’ Cup days held here in 2017), is quite eligible to tumble notably today thanks to a terrific racing card and a $1,874,996 carryover into today’s Pick Six Single Ticket Jackpot wager.

TVG Pacific Classic Day has been designated as one of two “mandatory payout” dates (the other is closing day), which means that all monies in the pool – including the carryover – will be paid out this afternoon to those with the most winners in the six-race bet.

Estimates of anywhere from $6- to $10-million in “new money” in the Pick Six pool today would most assuredly push the one-day betting handle above the former mark, possibly into the $30-million-plus range.

The track’s 20¢ Pick Six Single Ticket Jackpot wager has carried over 18 times since it was hit on Day 2 of the current meet.