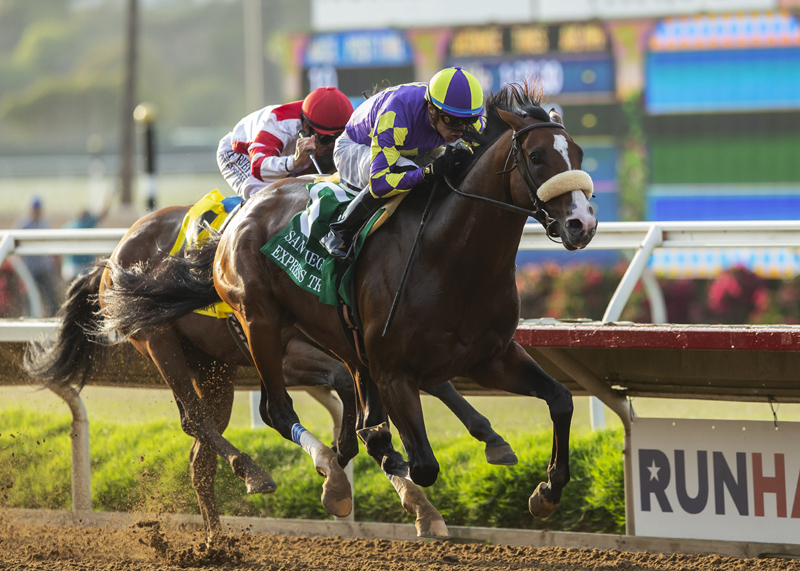 SOMETHING OF A ROLE REVERSAL FOR SHIRREFFS, BAFFERT IN CLASSIC

John Shirreffs has saddled four starters in the $1 million TVG Pacific Classic, and the closest he has come to a win was the third-place finish by Midcourt, off at odds of 15-2 and beaten 5 ¾-lengths by Maximum Security, in last year’s 30th running.

In providing Bob Baffert with a TVG Pacific Classic record-tying sixth victory, Maximum Security went postward as the 2-5 favorite. Of Baffert’s six wins in the race, five have come with either the favorite or second betting choice. The outlier: Richard’s Kid stunning at odds of 24.40-1 in 2009.

In Saturday’s 31st running of the 1 ¼-mile signature event of the summer meeting, Shirreffs has the 3-1 morning line favorite in San Diego Handicap winner Express Train. Baffert’s lone entry is 20-1 Magic On Tap, who was nearly 12-1 in the San Diego, stumbled at the start and finished fifth of eight, beaten 6 ¾-lengths.

If the odds stay that way to post time, Shirreffs will have a Classic favorite for the second time. Bertrando, the 2-1 favorite in 1994 off his victory a year earlier when trained by Bobby Frankel, got caught up in a speed duel for the first three quarters and faded to eighth of nine.

Earlier in the 1994 meeting, Bertrando had provided Shirreffs with the first of what has now become 17 Del Mar stakes victories. A TVG Pacific Classic would be a welcome addition and Shirreffs has reason for optimism about the 4-year-old son of Union Rags, owned by the C R K Stable of Lee and Susan Steering, who has four victories from 12 career starts and earnings of $659,300.

And, as is always the case, Shirreffs, 76, will be focused intently on developments with his horse before, during and after the race.

“But if he can control his nervousness a little bit and maintain his focus, he’ll do really well. That’s a sign for him. He controlled himself well in the paddock before the San Diego and ran a very good race.”

As for Baffert: “He’s a long shot, but we’re fine with the post position and we’re happy to be a part of it,” he said.

The TVG Pacific Classic is a “Win and You’re In” qualifier for the $6 million Breeders’ Cup Classic on November 6 at Del Mar.

McCARTHY HAS FOUR, AND A MAJOR PLUS-ONE TO SADDLE SATURDAY

Trainer Mike McCarthy has four of his own charges to saddle in three of the five graded stakes on Saturday’s $1 million TVG Pacific Classic card – and one extra.

McCarthy has multiple graded stakes winner Smooth Like Strait, the 9-5 nominal second choice to 8-5 Mo Forza in the Grade II $300,000 Del Mar Mile, the seventh race on the program. He has his own Independence Hall (5-1) and former boss Todd Pletcher’s Dr Post (4-1) to take care of in the TVG Pacific Classic. And he’ll end the busy day with two to saddle, Crossfirehurricane (30-1) and Master Piece (15-1) in the Del Mar Handicap Presented by The Japan Racing Association, which is the nightcap of an 11-race program.

For most of the build-up to the Classic, it appeared that Independence Hall would not be a participant. The Charles Town Classic on August 27 was considered the destination for the 4-year-old son of Constitution.

“We decided to run him right out of his stall rather than ship across country,” McCarthy said. “He’s a horse that has a lot of ability and he’s trained well up to this point. We’ll lead him over and hope for the best. It’s a great position (No. 7) and hopefully we get a good break and take it from there.”

Two late changes, announced at the post position draw, worth noting: Florent Geroux replacing the originally announced Trevor McCarthy in the saddle and the addition of blinkers.

McCarthy, an assistant to Pletcher for 11 ½ years before going out on his own, has had Dr Post in his stable since the horse’s arrival from Saratoga on Tuesday and will do the saddling duties. Pletcher, recently recovered from a bout of COVID, will remain in New York.

Dr Post, a 4-year-old son of Quality Road who was a $400,000 purchase at the 2018 Keeneland September sale, has nearly doubled his purchase price with four wins from nine career starts. He has two Grade III wins from three 2021 starts. His only loss came in the Grade I Metropolitan Mile Handicap.

Pletcher’s entire previous Del Mar experience came during the 2017 Breeders’ Cup when he had one win and five out-of-the-money results from six starters and left with earnings of $144,345. Destin got Pletcher’s crew off to a good start winning The Marathon, but a fifth-place from March X Press in the Juvenile Turf Sprint was the best from five other starters.

McCarthy’s Smooth Like Strait is nearing millionaire status with $983,823 from seven wins in 16 lifetime starts entering the Del Mar Mile. The 4-year-old son of Midnight Lute won the Grade III La Jolla Handicap and was second in the Grade I Hollywood Derby at Del Mar in 2020 and was second, beaten a neck by United, in the Grade II Eddie Read on July 24.

“I thought he was a little unlucky in the Eddie Read, but he came out of it good and has trained well,” McCarthy said. “This is obviously an excellent race, a strong field, but he likes Del Mar and gives a good effort every time.”

Crossfirehurricane was imported from Ireland and made his U.S. debut for McCarthy in the Shoemaker that was won by stablemate Smooth Like Strait in May. Having some time to acclimate to new surroundings and going from a mile race to the 1 3/8 miles of the Del Mar Handicap should be more to the Kitten’s Joy colt’s liking.

“He needs to have some pace to run at and obviously he’s going to get that,” McCarthy said.

Master Piece is a newcomer to the McCarthy barn, having made his first four U.S. starts since arrival from South America for trainer Chad Brown in the Midwest or East.

Irish-bred filly Soaring Sky, an arrival at Del Mar a week ago, will be facing eight well-seasoned U.S.-based runners in the Grade I, $300,000 Del Mar Oaks, the ninth race on the Saturday’s 11-race program.

A formidable task, but one that trainer Kate Harrington – assistant to and here on assignment from her mother Jessica – is looking forward to seeing through.

“We’re very happy with her,” Harrington said of the bay filly who recorded two wins in seven starts – one at Dundalk and one at Limerick -- in seven Emerald Isle starts.

The filly arrived on August 13 and has been stabled in John Sadler’s barn. Soaring Sky will stay with Sadler and be campaigned in Southern California after the Del Mar Oaks.

Kate Harrington, who arrived on Wednesday, was pleased with what she saw of Soaring Sky on Thursday.

and we’re happy enough with the (post position),” Harrington said. Soaring Sky drew the outside in a field of nine.

“She likes a little bit of space and we’re hoping for a big run.”

The field for the Del Mar Oaks from the rail with jockeys and morning line odds:

Mark Glatt-trained Collusion Illusion, voted the top sprinter of the 2020 Del Mar meeting off a victory in the Grade I Bing Crosby Stakes, will make his 2021 racing debut in Sunday’s Green Flash Handicap. It’s sprinting all right – five furlongs. But it’s also on turf, which will be a first for the 4-year-old son of Twirling Candy.

A minor hoof injury incurred on the eve of the race prevented Collusion Illusion from a title defense in the Bing Crosby on July 31.

“He got a little off schedule when he was supposed to run in the Bing Crosby, and we had talked about running him on turf at some point,” Glatt said. “Given his level of fitness and what races were available to us in the near future here, the Green Flash was the only one that made sense.

“It’s time to try him on the turf and see how he does. If it works out, this could open up a whole new avenue (of racing) for us to consider.”

Del Mar’s 5th edition of the Pacific Classic Betting Challenge will be off and running Saturday with 120 serious bettors taking swings at the track’s 11-race card for $180,000 in prizes, including $50,000 to the winner.

The one-day contest can be played at Del Mar or online with TVG.com and requires a $5,000 buy-in with $1,500 of that going into the prize pool and the rest representing “live money” wagers.

In addition to the live money and prize money, players also can earn one of seven Breeders’ Cup Betting Challenge entries, each worth $10,000. (The Breeders’ Cup will be hosted by Del Mar this year on November 5 and 6.) Further, there also are six entries available in the $2.8 million National Horseplayers Championship in Las Vegas to those doing best at Del Mar Saturday.

Del Mar’s Chris Bahr is the contact for Saturday’s event and he can be reach via e-mail at chris@dmtc.com.

CLOSERS – Rock Your World was one 14 nominees to the $100,000 Shared Belief Stakes for 3-year-olds on August 29 and trainer John Sadler confirmed it will be the next start for the Santa Anita Derby winner. The $200,000 Grade II Del Mar Derby on September 4 had previously been the prime target for the son of Candy Ride, who was also a TVG Pacific Classic nominee … The Grade II, $200,000 Pat O’Brien Stakes on August 28 closed Thursday at midnight with 24 nominations, among them defending champion C Z Rocket … The $80,000 Tranquility Lake Stakes next Friday closed with 13 nominations.