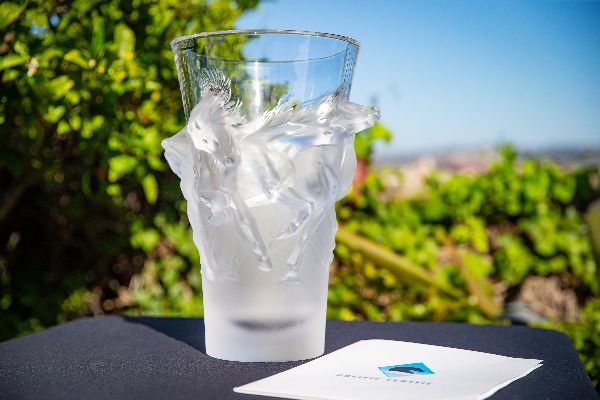 A field of nine was entered and post positions were drawn Tuesday for Saturday’s 31st running of the $1 million TVG Pacific Classic and there were no complaints heard during a quick survey of the connections assembled.

Whether their horse was assigned to break from the inside, middle or outside stalls.

John Sadler-trained Tripoli, second to Express Train, beaten a half-length in the San Diego Handicap on July 17, drew the normally dreaded No. 1 post. And, asked about it this morning, Sadler shrugged.

“The post is OK, he’s got a mile and a quarter to run and a long way to the first turn,” Sadler said. “He’s doing great, ready to go and we’re happy to be in there.”

Sadler said that while Santa Anita Derby winner Rock Your World was nominated for the signature event of Del Mar’s summer meeting, it was never a matter of serious consideration. There will be an announcement regarding Rock Your World tomorrow, Sadler said.

“The post is great, we’re happy to be right in the middle,” Shirreffs said. “He’s got tactical speed and once he gets to the backside he relaxes and gets into a good long stride.”

Craig Dollase-trained Cupid’s Claws, second to Tizamagician, beaten 2 ½ lengths in the Cougar II Stakes on July 18,  drew the far outside No. 9.

“I’m happy with it,” Dollase said. “We’re in the clear, he’ll be forwardly placed and hopefully get the distance.”

The 1 ¼-mile TVG Pacific Classic is a “Win and You’re In” qualifier for the $6 million Breeders’ Cup Classic on November 6 at Del Mar.

MANDELLA REFLECTS ON THE PASSING OF OWNER B. WAYNE HUGHES

The most recent of Hall of Fame trainer Richard Mandella’s four TVG Pacific Classic victories came in 2015 with the great mare Beholder for owner B. Wayne Hughes of Spendthrift Farm.

Hughes died Wednesday at age 87. Mandella took a moment this morning to reflect on Hughes’ passing.

“Our family and racing have lost a great friend,” Mandella said. “Wayne not only enjoyed the racing business, he looked after it.

“One of the first horses I had for him was Action This Day who won the (2003) Breeders’ Cup Juvenile, so we got off to a good start. And it ended on a pretty good note too with Beholder, the big star.”

Meet-leading trainer Peter Miller will be represented in the first three of the five stakes on Saturday’s TVG Pacific Classic Day extravaganza.

Miller with 14 wins through the first 18 days of the meeting and a four-win advantage over Mark Glatt, will saddle Forest Caraway in the $100,000, Grade III Torrey Pines, the sixth race on the 11-race program. Immediately following, he will send out Neptune’s Storm and defending race champion Mo Forza in the Grade II, $300,000 Del Mar Mile. Then, two races later, Miller has Feathers for the Grade I, $300,000 Del Mar Oaks.

After that, Miller will be able to settle somewhere and watch the $1 million TVG Pacific Classic (Race 10) and the nightcap Grade II, $300,000 Del Mar Handicap.

“Hopefully with a smile on my face and a cold adult beverage in my hand,” Miller said this morning.

Here’s a look at the first three Saturday stakes from Miller’s point of view.

Torrey Pines, one mile on the main track for 3-year-old fillies: “(Forest Caraway) was very impressive in her last start. This is her first time around two turns but we think she should handle it. It’s a step up in class for her, but it’s a Grade III and we’re going to take a shot.”

The field for the Del Mar Mile from the rail with jockeys and morning line odds:

Del Mar Oaks, 1 1/8 miles on turf for 3-year-old fillies: “We’re taking a shot with Feathers, hoping to hit the board. It’s a Grade I, but I don’t see any monsters in there and it’s a big thing for a filly to get a Grade I placing.”

The field for the Del Mar Oaks from the rail with jockeys and morning line odds:

Lava Man, the rags to riches gelding who ran his way into the Hall of Fame and in “retirement” has become a mentor to young horses as a stable pony extraordinaire, has found yet another role to fill in this, his 20th year – he’ll lead this Saturday’s parade to the post for the 31st TVG Pacific Classic.

The old pro who went skyward from the claiming ranks to a Grade I headliner during his five-year racing career won 17 times and earned $5,268,706. Among his victories was a sweep in 2006 of the “California Triple” of the Santa Anita Handicap, the Hollywood Gold Cup and the Pacific Classic.

Though sent to pasture following his running days, he showed his people that he wanted to be back at the track and trainer Doug O’Neill welcomed his charge back to his barn where he happily goes about his business of escorting racehorses trackside and has earned the nickname “Coach.”

Recently, Lava Man went on the road with O’Neill’s Triple Crown aspirant Hot Rod Charlie, keeping him company during his runs in the Kentucky Derby and the Belmont Stakes.

Lava Man will follow in the footsteps of a Del Mar icon named Star Fiddle. The speedster won the first Del Mar Futurity in 1948 and then in 1958 was brought out of retirement to lead the parade to the post for that same race, a role he continued to 1972.

The TVG Pacific Classic will go as Race 10 on Saturday’s 11-race program with a post time of approximately 6:30 p.m.

Racing fans who love a good racing read have a winning way to go at Del Mar by accessing the Helen Watts’ Memorial Library any racing day in the track’s Green Flash Paddock Club just off the paddock on the Clubhouse side.

Its bookcase is filled with interesting racing books and they are there for the taking with just a few requests attached.

Here’s the explanatory statement that sits atop the bookcase:

For the patrons of the Del Mar Thoroughbred Club, these books are the collection of Helen Watts, a lifetime lover of all horses and horse racing

The Paulick Report’s Carol Paulick, who donated the books, said: “My Mom would be thrilled that her books could be enjoyed by others who share the passion she had of reading and racing.”

Bully’s Del Mar, an iconic restaurant and bar in downtown Del Mar that for half a century was a favorite watering hole and gathering spot for racetrackers, will be celebrated on September 14 in an event that will include auctions of its memorabilia.

Bully’s was partially owned by horseman and first-rate character Lester Holt and was – at one point – one of four Bully’s restaurants in San Diego county. It opened in 1967, but closed several years ago and now is going through a rebuild as a new restaurant.

Del Mar Historical Society honcho Larry D. Brooks is overseeing the celebration and auctions. It will take place a Zel’s Del Mar at 1247 Camino del Mar – just up the block from the Bully’s site -- between 5:30 and 7:30 p.m. There is a $10 cover charge for the event that includes admission, drinks at reduced prices and finger food. It is asked that reservations be made by attendees at the following e-mail address --  Xiceman62@gmail.com  A catalog with descriptions of the memorabilia can be obtained at the same e-mail address.