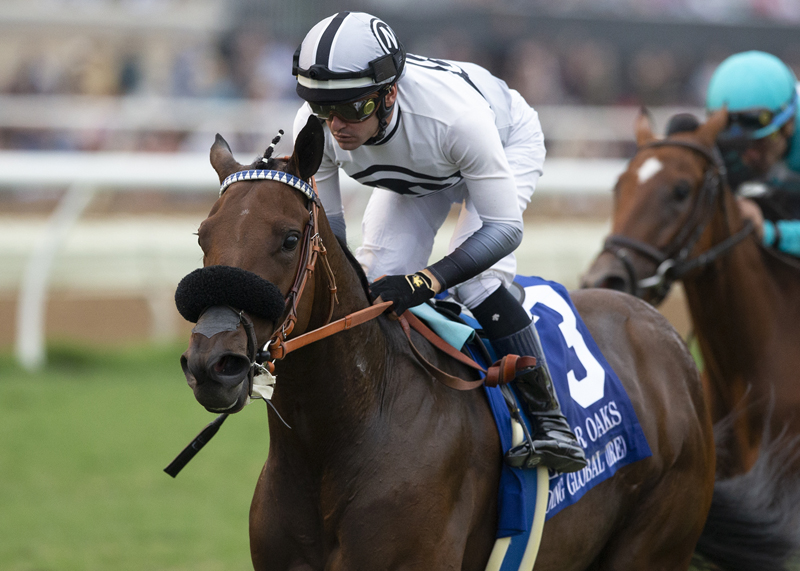 The top 3-year old filly on the grounds at Del Mar’s 2021 summer meet returns to the seaside oval Saturday when she faces six rivals in the G2 Yellow Ribbon.

Last year, Going Global finished second to Madone in the G2 San Clemente before running off with a popular win in the G1 Del Mar Oaks and earning end of the meet honors. The Irish-bred daughter of Mehmas, out of the Invasor mare, Wrood, is owned by a partnership headed by Michael Dubb and, according to trainer Phil D’Amato, doing very well leading up to the race.

“She likes Del Mar,” D’Amato says. “She’s been training very well here on the turf course and I’m excited to run her.”

Going Global has run twice this year, winning the G2 Royal Heroine at Santa Anita in her 4-year old debut in April then finishing third behind Ocean Road and new stablemate Going to Vegas in the G1 Gamely on Memorial Day.

“She was in tight in certain spots and I think it compromised her chance late,” D’Amato says of her race in the Gamely. “She still had free run at them but was in between horses. She fought valiantly but it wasn’t her day.”

Flavien Prat rode Going Global in the Gamely but trainer Phil D’Amato will stick with his hot hand in the Yellow Ribbon, jockey Umberto Rispoli.

“Prat’s done nothing wrong on her,” D’Amato notes. “The only reason he’s not back up is that he’s at Saratoga. Umberto has won on her and he knows her well enough and Umberto and I are doing real well here so far.”

Rispoli was on D’Amato’s pair of stakes winners earlier in the summer meet, Balnikhov in the Oceanside on opening day and Bellabel in the G2 San Clemente.

Last year, Going Global skipped the Breeders’ Cup, the connections choosing instead to run her in the G2 Goldikova at Del Mar on the Breeders’ Cup undercard. It proved a wise choice as she won handily. They brought her back for the G1 American Oaks on Santa Anita’s opening day but she ran sixth.

“We’ll take it race by race,” D’Amato says. “That’s (the Breeders’ Cup) probably our goal at the end of the year but she’s gotta get us there and earn her way into the race.”

Hronis Racing’s Park Avenue is back from Texas to contend in the Yellow Ribbon. The daughter of Quality Road won the Ouija Board Distaff at Lone Star Park at the end of May. This will be her first race since returning to California.

Shipping in for the Yellow Ribbon will be G. Watts Humphrey Jr’s Flippant, winner of the $100,000 Indiana General Assembly Distaff at Horseshoe Indiana last month.

The Yellow Ribbon, a longtime staple of Southern California stakes racing dating back to 1976, will be run as the sixth race on the 10-race Saturday card at Del Mar.

HERNANDEZ OPENS UP IN JOCKEY RACE; TRAINERS’ TOO CLOSE TO CALL

Rider Juan Hernandez opens up week four of the summer meet at Del Mar with a sizable lead in the Del Mar Jockey Standings, while the trainers’ race is up for grabs.

Hernandez has won 19 races through the first three weeks of the meet, eight better than runner-up Umberto Rispoli, who is one ahead of Joe Bravo. Out of his 80 mounts, Hernandez is winning at a 24% clip and has finished in the money 55% of the time. His mounts have earned over $1.3 million through Sunday August 7.

“I’m really happy, I feel good,” Hernandez said. “I’m having fun here at Del Mar and hopefully we can keep it up.”

Hernandez, sitting in a golf cart on the backside with agent Craig O’Bryan, credits his agent for much of his success.

“He’s been picking the winners, all the good horses.” Hernandez said. “We’ve been lucky with the horses and I’ve been available to bring them to the winner’s circle.”

The trainers’ race is a little more congested. Phil D’Amato and Bob Baffert are locked in a tie with eight wins each. George Papaprodromou, Peter Miller and Doug O’Neill are next, just one win back with seven.

What is not as tight is the earnings race among trainers. D’Amato has the highest earnings so far at Del Mar with $949,086. Papaprodromou is next with $646,040. D’Amato says, for his barn, the best is yet to come.

“I think we’re going to slowly pick up steam here and have a good second half of the meet,” D’Amato says. “but we’re happy with where we are at so far.”

Four trainers have each won two stakes races at the meet. D’Amato won the first two stakes of the meet, the $100,000 Oceanside on opening day with Balnikhov and the G2 San Clemente the next day with Bellabel; Marcelo Polanco won the Wickerr with Irideo and the G1 Clement Hirsch with Blue Stripe; Papaprodromou won the G1 Bing Crosby with American Theorem and the G3 La Jolla with Cabo Spirit. Richard Mandella has two stakes to his credit at the summer meet, the G2 San Diego with Royal Ship and the $175,000 Real Good Deal with Big City Lights, giving him 72 over his career at Del Mar and lifting him past Bobby Frankel (70) into fifth place all-time. Mandella needs two more stakes wins to catch Charlie Whittingham (74) on Del Mar’s all-time list.

The spotlight shines on the Cal-bred 2-year olds Friday when nine enter the gate in the five and a half furlong $125,000 Graduation Stakes at Del Mar.

Two of them have already won at Del Mar. Reddam Racing’s Hacking It Up came into his Del Mar debut off of a third-place finish behind Whobeterthantiger at Santa Anita in June. He promptly broke his maiden as the favorite for trainer Doug O’Neill on July 24.

Bartlett or Michael Bello’s The Big Wam also won at Del Mar last out. Trained by Luis Mendez, the son of Mr. Big has made three starts in his career, two in Kentucky. He debuted with a runner-up finish at Keeneland followed by another second-place finish in the $200,000 Kentucky Juvenile at Churchill Downs. The Washington-bred was brought out west and placed in the Mendez’ barn. He beat a group of maiden special weight types on July 24.

“He’s a good horse,” Mendez says. “We didn’t do much with him other than just take him out everyday. He does the rest on his own.”

Mendez believes his horse will handle the step up in class.

“We always play it by ear after every race,” Mendez said. “But after winning, after he broke his maiden, we wanted to try the Graduation.”

“We always knew he had good talent,” Koriner says. “We thought he might win a little easier than he did but it looked like he ran green, kind of waited on horses. He ran as far has he had to.”

The son of Smiling Tiger will be ridden by Tyler Baze.

Other first-time winners in the race are KMN Racing’s Straighten Up from the Jerry Hollendorfer barn. He romped in a $30,000 maiden claimer at Los Alamitos last out. Early Release also won at first asking. The son of Stanford is one of two entries in the Graduation by trainer Jonathan Wong for Tommy Town Thoroughbreds. He’ll be joined by stablemate and Northern California invader Man Oh Man.

“The race came up tough but we drew better this time, “ Wong says of Man Oh Man. “Last time we drew inside so our hand was kind of forced and we had to go to the lead. He worked here the other day and sat off of horses so, ideally, a couple of horses will hook-up and we’ll be sitting third or fourth and get a nice stalking trip.”

COOLING OUT: Declan Cannon won his first race ever at Del Mar Sunday, guiding longshot Bear Mountain to victory in Race 3. The 2-year old son of Kitten’s Joy paid $90.60 to win…Cabo Spirit came out of his victory in last Sunday’s G3 La Jolla in good shape. Trainer George Papaprodromou says they’ll point him to the Del Mar Derby September 3…New first post time for Fridays at Del Mar: The races will begin an hour earlier at 3PM instead of at 4PM starting on August 19. Officials want to make sure there’s enough sunlight for the final race of the day...Belated birthday wishes to jockey Mike Smith, who turned 57 Wednesday…Notable works on Thursday: Dirt – Royal Ship (4f, 46.20); Eddie’s New Dream (5f, 1:01.6). A total of 96 horses put in official works.