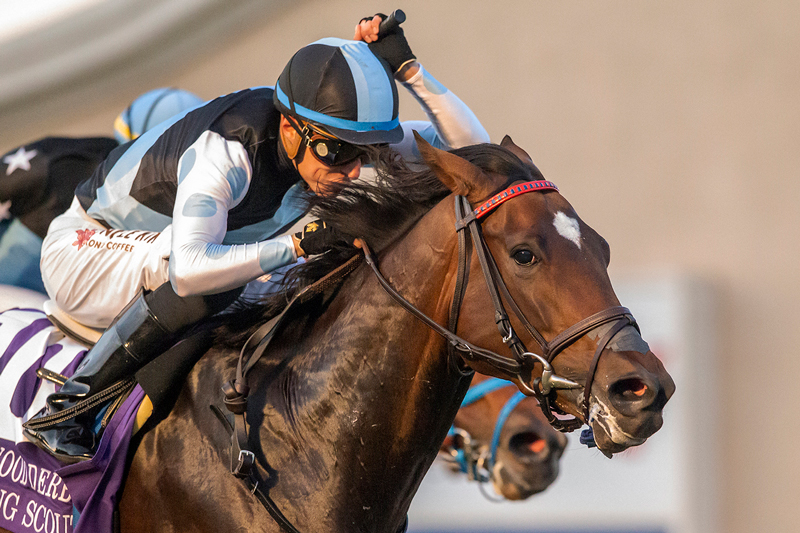 Eclipse Thoroughbred Partners’ Speaking Scout fired a big shot in the lane and came away a Grade I stakes winner for the first time when he clicked by three-quarters of a length Saturday afternoon at Del Mar in the 82nd edition of the $400,000 Hollywood Derby.

The Mr. Speaker gelding outran nine other 3-year-olds in the mile and one-eighth grass headliner on a three-stakes day at the seaside oval and earned a first prize of $240,000. It was his fourth career victory and pushed his bankroll up to $500,666.

The Kentucky-bred, shipped west by trainer H. Graham Motion in October, had run second in the Grade II Twilight Derby at Santa Anita on October 29 under Juan Hernandez. Del Mar’s leading rider was up on him again this afternoon and piloted him nicely through the big field to finish with a strong, late rush. Final time for the nine panels was 1:49.34.

Finishing second was Muir Hut Stables’ Spycatcher, who had just a nose on the 19-10 favorite Wit, owned by Repole Stable, St. Elias Stable and Gainesway Stable.

Earlier on the card, New York invader Liguria captured the $103,500 Jimmy Durante Stakes with a fine stretch mover under Flavien Prat to prove two and a quarter lengths the best. The daughter of War Front, trained by Chad Brown, bested 11 rivals in the Grade III, one mile turf test, running the distance in 1:36.16. She paid $4.80 as the 7/5 favorite.

The filly is owned by Alpha Delta Stables of Jonathan Clay of Palm Beach, FL.

Prior to that race, in the inaugural running of the $101,500 Stormy Liberal Stakes, leading trainer Phil D’Amato combined with leading rider Juan Hernandez to capture the five-furlong turf stakes with Turn On The Jets in :55.75 to pay $6.60 as the favorite in the dash.

The Irish-bred, 3-year-old chestnut gelding slipped up the rail and came away a two and a quarter length winner in the end. He’s owned by a partnership that includes the Benowitz Family Trust, John Rochfort and partners.

Del Mar’s final day of racing will be Sunday with a nine-race card starting at 12:30 p.m. The track’s popular Pick Six Single Ticket Jackpot wager will offer a mandatory payout on closing day. There will be a carryover of $513,149 in the pot to start the day off and the final pool should easily be worth several millions of dollars.

JUAN HERNANDEZ (Speaking Scout, winner) – “He didn’t break all that sharp today, but he put himself in a good spot and I was happy. He’s an intelligent horse. When it came time for him to switch leads, he did it and I had faith that he was going to run good from there. I was just the pilot; he did all the work.”

GRAHAM MOTION (Speaking Scout, winner) – “He saved our day. I really left it up to Juan; he had ridden him before. He’s such a good rider and he gave him a really good, patient ride. The timing was so good with the Santa Anita race. Alice Clapham, my assistant, has had him here the whole meet. She really deserves the credit.”

The stakes win was the sixth of the session for rider Hernandez, but his first in the Hollywood Derby. He now has 33 stakes wins at Del Mar.

The stakes win was the second of the meet for trainer Motion, but his first in the Hollywood Derby. He now has nine stakes wins at Del Mar.

The winning owner is Eclipse Thoroughbred Partners, which is the nom du course for Aron Wellman of Rancho Santa Fe, CA.