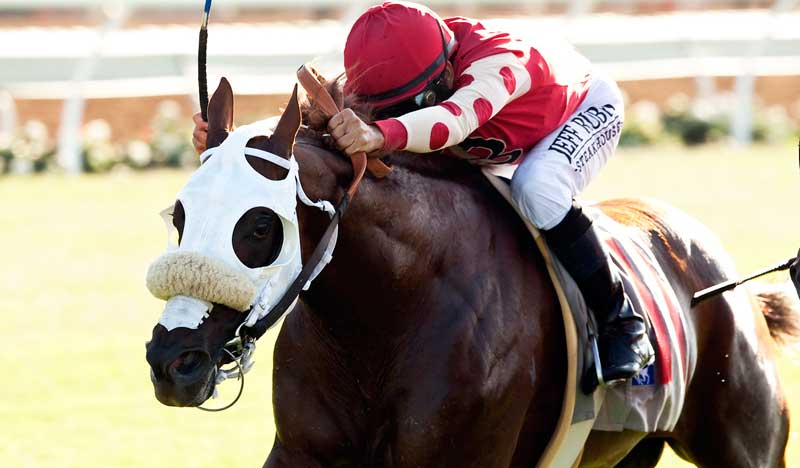 Bloom Racing Stable’s Soul Driver, piloted by Hall of Famer Mike Smith, held on gamely in the final strides to withstand the last-ditch challenge of pacemaking Forest Blue and Victor Espinoza to win the featured $114,500 Oceanside Stakes on opening-day of the Del Mar summer racing season.

Far back in the early stages of the one-mile contest over the infield Jimmy Durante Turf Course, Soul Driver, a solid second choice at 5-2 in the field of eleven three-year-olds, encountered traffic trouble on the far turn before darting between horses entering the stretch to move into contention.

He hooked up with 8-1 Forest Blue in mid-stretch and then outdueled that rival to the wire in scoring by a nose in 1:35.86 for the distance. Royal Albert Hall, a 12-1 outsider, was a distant third, 3 ½ lengths farther back and a nose in front of fourth-place Tried and True.

Papacoolpapacool, the 6-5 favorite under Gary Stevens, was pushed extremely wide while rallying into the stretch and wound up fifth. Scratched from the original line-up was Ground Rules.

Racing resumes Friday with the first race scheduled for 4 p.m.

MIKE SMITH (Soul Driver, winner) – “This (mount) was a nice pick up for me. I was just asked to ride him and only got on him a time or two. How nice to pick up a nice horse like this and ride him on a big day like this. I got in kind of a funny spot with him over near the far turn. Don’t know if I normally would have gone into a place like that, but it was one of those things where I had to make something happen. I managed to make it through and he was good enough from there. He’s a nice horse.”

VICTOR ESPINOZA (Forest Blue, second) – “He ran really well. First time on grass for him and the tight turns on this course can be a little tricky. When we came into the stretch, he drifted out a little bit. He wasn’t quite ready for that turn to be so sharp. Maybe if he handles it a little better, we’re finishing first. But he ran great.”

FLAVIEN PRAT (Royal Albert Hall, third) – “We had a good trip and the horse gave it a good try.”

JEFF MULLINS (Soul Driver, winner) – “Up until his last two races he had terrible, terrible trips.  Every time he got in trouble.  Mike (Smith) got in a tight spot today, and either had to go or wait. He said just as he went for it the inside opened up and it was clear sailing from there. I think he’ll get better and I think he’ll run all day. We’ll see how he comes out of this and decide what to do next.”

The stakes win by rider Smith is his third in the Oceanside. He won it last year with Enterprising. It also was his 51st overall at Del Mar.

The stakes win for trainer Mullins was his first in the Oceanside. It was his 17th overall at Del Mar.