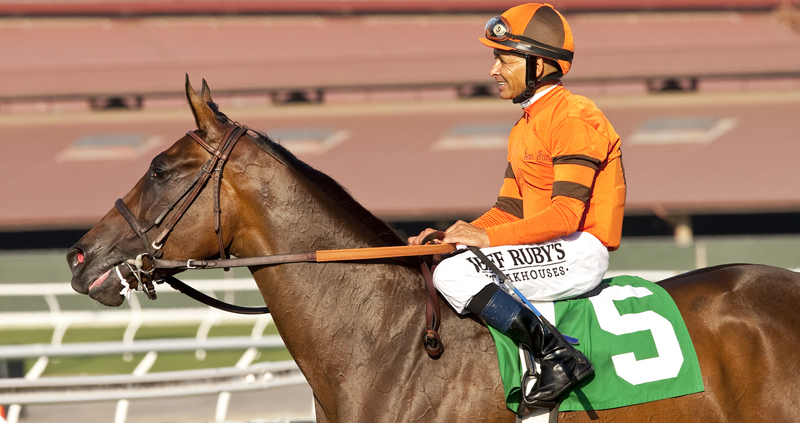 Following up his Saturday success aboard Enterprising in the La Jolla Handicap, Smith made it a weekend stakes double with Moulin de Mougin’s  come-from-behind half-length triumph over a stubborn Wishing Gate in the nine-furlong test over the infield Jimmy Durante Turf Course.

Outrun in the early stages of the race, Moulin de Mougin rallied powerfully on the rail in the stretch to engage and then wear down  2-1 second choice Wishing Gate, who was piloted by apprentice Drayden Van Dyke. Cozze Up Lady was third, a half-length behind the runner-up and a length in front of Stormy Lucy in the field of six. Miss Serendipity, the 9-5 favorite under Rafael Bejarano, finished last after encountering traffic trouble in the stretch.

Withdrawn from the original field were Charlie Em, Miss Ellany and Queen of the Sand.

Moulin de Mougin, a four-year-old Kentucky-bred daughter of Curlin, was bred and is owned by Ran Jen Racing, nom de course of Robert Naify of San Francisco, and trained by Hall of Famer Richard Mandella. The victory was her fourth in 13 starts and first money of $150,000 boosted her earnings to $312,910.

With no perfect tickets in Sunday’s Pick Six, there will be a carryover of  $171,914 added to the pool for Wednesday’s Pick Six.

MIKE SMITH (Moulin de Mougin, winner) – “I can’t recall winning a stakes on my birthday before. (He turned 49 today.) I usually don’t do good on that day. I’ve won a race or two before, but nothing like this. I had a good feeling about this filly today. Her last race was a good one (3rd in the Royal Heroine at Santa Anita June 28) and Mr. (Richard) Mandella told me she’d really been doing well, which meant I could expect even more of her today. I sat back there in that pocket for as long as I could and then cut her loose. She’s got a terrific run for about an eighth of a mile and today she showed it.

(For the second day in a row Smith dove to the fence at the end of a stakes and won them both.) “Yeah, and they say us old guys won’t ride the rail.”

DRAYDEN VAN DYKE (Wishing Gate, second) -- “She ran hard. I did all I could do with her.”

KENT DESORMEAUX (Cozze Up Lady, third) – “She’s a good filly and she’s the kind that can handle most any distance. We had a little issue there in the stretch. The leader (Wishing Gate) came out sharply. That’s what caused the fade.”

RICHARD MANDELLA, (Moulin de Mougin, winner) – “This is a filly that keeps getting better as she goes. Being out of the mare Cambiocorsa we kind of took it for granted she’d like 6 ½ furlongs on the turf, but after a little bit of that we decided the farther the better. The Curlin (sire) kind of comes out then, too. It’s a real honor to win the John Mabee.  He was very good to me with some horses and I’ll never forget him and his wife Betty. And it’s a big day for Mike Smith. It’s his birthday. I think he’s 75 now.”

The stakes win was the fourth of the meet for Smith (most by any rider at the session so far), but his first in the Mabee. He now has 43 stakes wins at Del Mar all time.

The stakes win was the first of the meet for Mandella, but his second in the Mabee (Matiara in 1996). He now has 53 stakes wins all time, fifth most of any trainer in track history.