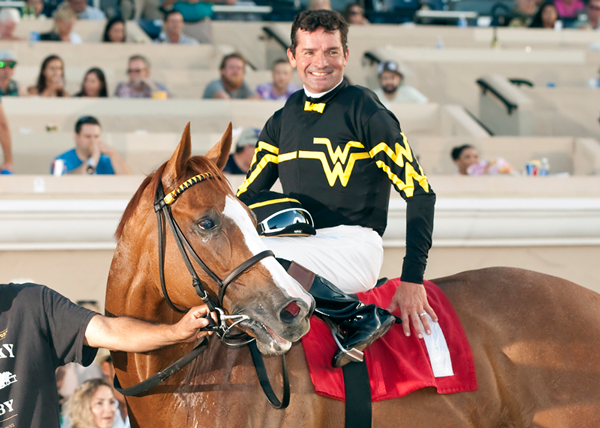 Well-traveled Shrinking Violet, whose specialty is sprinting on the grass, used the featured $92,530 Daisycutter Handicap as a showcase for her ability Friday with an authoritative victory in the five-furlong dash over Del Mar’s infield Jimmy Durante Turf Course.
Providing jockey Kent Desormeaux with his third triumph of the afternoon, Shrinking Violet, second choice in the watering at 9-5, circled her rivals turning into the stretch and cruised to the wire four and three-quarter lengths in front in a fast :56.53 for the distance.
Home Journey, the 3-5 favorite ridden by Rafael Bejarano, was no match for the winner in the stretch but finished second, two and one-quarter lengths ahead of 60-1 longshot Our Pure Creation who nosed out Amaranth for third money.
Highly-regarded Birdlover, expected to be a strong contender in the Daisycutter Handicap, was scratched after failing to warm up properly, according to Del Mar stewards.
Shrinking Violet, a five-year-old daughter of Congaree owned and trained by Wesley Ward, ran a month ago at Woodbine in Toronto, Canada and previously competed at Pimlico in Baltimore, Maryland and Santa Anita this year. In 2014 she ran at Turfway Park, Keeneland and Tampa Bay Downs, a similar campaign to 2013 when  she raced at several different tracks in America.
The chestnut mare earned a prize of $50,460 with her eighth triumph in 19 career outings to increase her bankroll to $454,728.  She boasts four wins in seven races at the Daisycutter ‘Cap distance. To her backers Friday, she returned $5.80, $2.60 and $2.40.
Home Journey paid $2.40 and $2.20, while Our Pure Creation returned $9.20 to show.