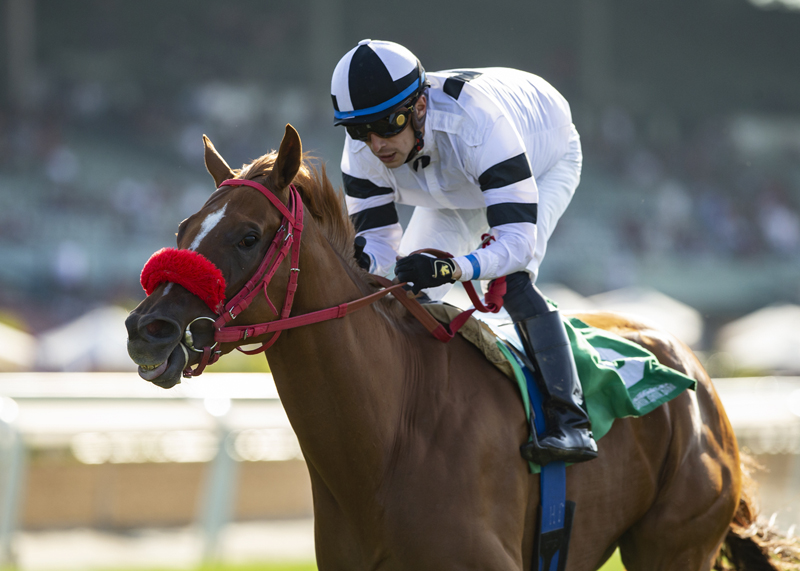 Benjamin and Sally Warren’s homebred Warren’s Showtime is a rip roaring racing filly who has been ATM machine-like when it comes to delivering the cash. She’s been to the post 20 times over three seasons and missed a check only once. She has seven victories and 16 stakes placings. She’s won against Cal-breds and in open company. She’s currently got $697,431 in her bank account. And by the looks of it, lots more dances to dance.

Sunday at Del Mar she’ll take on six rivals in the 28th edition of the Solana Beach Stakes, a mile spin on the Jimmy Durante Turf Course that is part of the Golden State Series for California-bred or sired fillies and mares. They’ll be running for a prize of $150,000.

Trainer Craig Lewis will give rider Juan Hernandez a leg up on Warren’s Showtime. He won’t, but if he wanted to, he could give the reinsman a substantial history lesson about the 4-year-old filly and her family. Lewis trained her daddy – Clubhouse Ride – who raced 43 times and won more than $1.3 million under his tutelage and now has become one of the rising stallions in the state. The conditioner also trained her mother – the mare Warren’s Veneda, another homebred who raced 29 times and banked more than $930,000. Warren’s Showtime has history and the Warren family and Lewis know it well.

Del Mar morning line maker Jon White has hung the chestnut miss as a solid 6/5 favorite in the Solana Beach. Nobody’s ready to argue about that.

Here’s the full field for the Solana Beach from the rail out with riders and morning line odds:

Pulpit Rider won last year’s edition of the Solana Beach. The 6-year-old mare by the late Lucky Pulpit had finished second in the 2019 running, but was disqualified for an infraction and moved back to sixth.

Leggs Galore, a 4-year-old gray by Bayern, has traded punches with Warren’s Showtime in their last two starts. ‘Leggs’ was best by three-quarters of a length over ‘Showtime’ in the Fran’s Valentine at Santa Anita on May 9, but the results were reversed in the June 20 Grade III Wilshire Stakes at Santa Anita with ‘Showtime’ finishing a length and a quarter to the good.

Sedamar, a 5-year-old mare by Richard’s Kid, missed by a whisker to Pulpit Rider in last year’s Solana Beach.