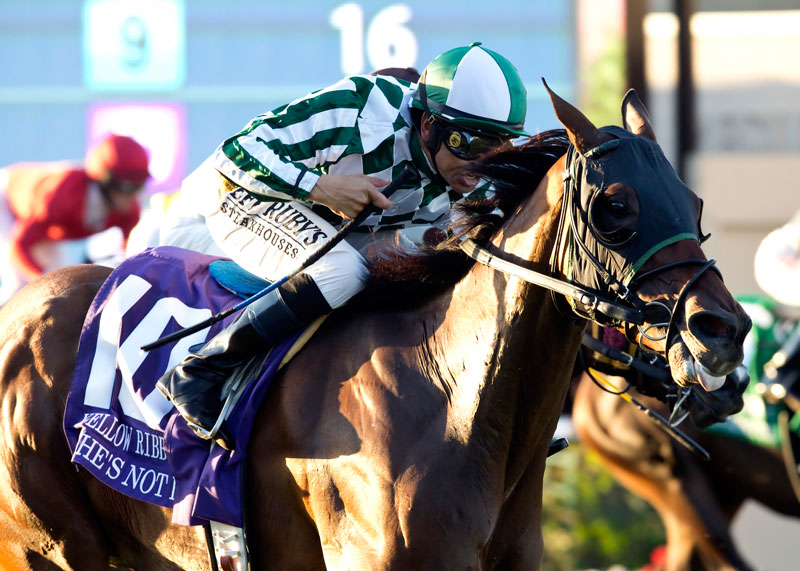 She's Not Here was a "Ship and Win" winner who came back to capture the Yellow Ribbon Handicap (above).
“Ship and Win,” the simple yet effective program that has attracted hundreds of out-of-state horses to California since it was started at Del Mar in 2011, will continue to be offered during the seaside track’s upcoming fall session which starts Thursday, October 29.
The 20-day meeting – presented on a Thursday through Sunday basis through November 29 – will hit the ground running with the track serving as the California host of the 32nd edition of the Breeders’ Cup from Keeneland in Kentucky on its opening Friday and Saturday.
“Ship and Win” horses are part of a win-win-win policy that rewards all involved through their importation to Del Mar. First off, owners of those horses receive a check for $1,000 when they break from the starting gate in their first local race. Those same owners can add to that advantage with an additional bonus of 30% on top of whatever purses monies they win in that initial California start. Del Mar becomes a winner, too, in the process by adding to its inventory of racing stock for its five-week fall meet. And, further, the majority of the “S & W” horses have shown a propensity to stay on to race at Santa Anita and Los Alamitos, meaning all of the Southern California racing circuit is a winner besides.
The healthy 30% bonus rewards kick up purses substantially when factored into the equation. For instance, a straight maiden race at the shore oval this fall carries a $52,000 incentive to start. But when the bonus ($15,600) is added to the mix, the total purse rises to $67,600. Racing officials noted that the 30% bonus applies to purse payouts across the board, not just the winner’s share.
Other examples of how the 30% boost affects purses can be shown in the case of a $40,000 claiming race where the prize increases from $36,000 to $46,800 with the bonus, as well as a $10,000 claimer that bulks  up from $17,000 to $22,100.
The “Ship and Win” program – initially a Del Mar solo project – went circuit-wide this year when Santa Anita joined the mix starting on April 2 followed by Los Alamitos. Funding for the program now comes from the three tracks, the Thoroughbred Owners of California and the California Marketing Committee, which is tasked with promoting racing in the state.
Southern California’s exceptional weather, year-round racing in a relatively compact area, the attractive venues and substantial fan base are strong selling points to out-of-state horsemen. Its lucrative purse offerings and its top riders add further luster to the formula.
With the aid of the “Ship and Win” horses, Del Mar has been able to maintain the highest field size in the state and one of the highest in the country. In 2010, the year before “S & W” was put in place, the track averaged 8.2 runners per race for its summer meet. In the five years since it has been 8.4 (in 2011), 8.7 (2012) and 8.8 in 2013-14-15.
Most wagering studies indicate a notable increase in handle can be tied directly to field size. New additional horses feed field size, which feeds handle, which in turn feeds purses, making “Ship and Win” a positive in all regards.
The program has encouraged local horsemen to seek out horses not only from out-of-state, but also from overseas. Several local trainers have enhanced their barns and their owners’ accounts with the program’s substantial payments and bonuses.
There are just a few basic rules involved with “Ship and Win” horses: An eligible horse must have made his/her last start outside California and cannot have started in the state within the past 12 months. First-time starters are not eligible. All stakes runners are eligible to receive the $1,000 starter fee, but no stakes runners – including overnight stakes -- are eligible for the 30% purse bonus.
Those with questions concerning the program are encouraged to contact Del Mar’s executive vice president for racing Tom Robbins, or racing secretary David Jerkens at (858) 792-4230.