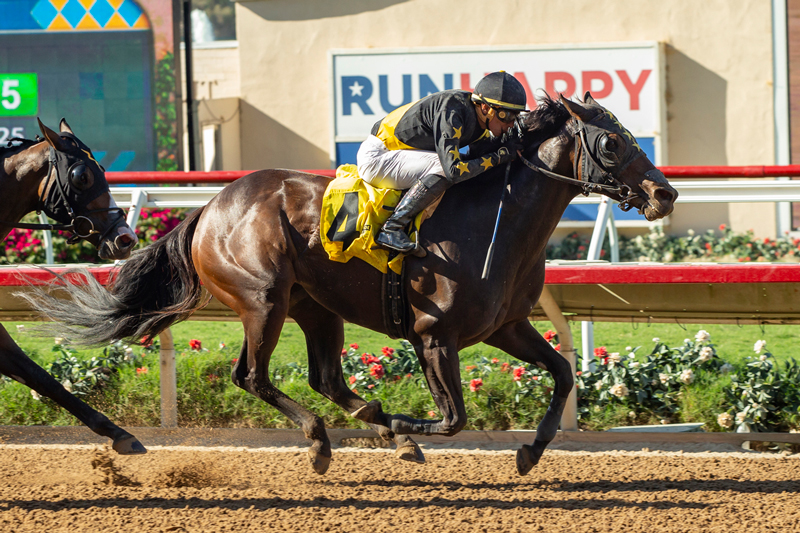 Brown or Halasz’s Sheza Girly Girl came rolling late down the middle of the racetrack and went on to score a three-quarter length victory and pay a healthy $47.20 for a $2 bet in the featured event at Del Mar on Thursday.

The 5-year-old California-bred mare by two-time Pacific Classic winner Richard’s Kid ended a long dry spell that saw her go more than two years without a tally, but she looked every part a winner under Tiago Pereira in the $84,000 allowance sprint.

Finishing second was Jim Robbins’ Lilly Babe, who had a half length on Baragan, Gentry or Kum, et al’s Vella.

Sheza Girly Girl is trained by Steve Knapp and her $27,600 winner’s share of the purse pushed her career earnings to $217,062. She now has five wins, four seconds and five thirds in 25 total starts.

The winner caught a break when the speedy race favorite – Barber, Eclipse Thoroughbred Partners, et al’s She’s Bulletproof – stumbled badly and went to her nose out of the gate nearly losing rider Florent Geroux. She recovered, but had to hustle to make it back into contention and ran out of gas in the stretch.

In the track’s Pick Six Single Ticket Jackpot wager, nobody had all six for the second day in a row and the carryover into Friday’s card will now be $112,950.