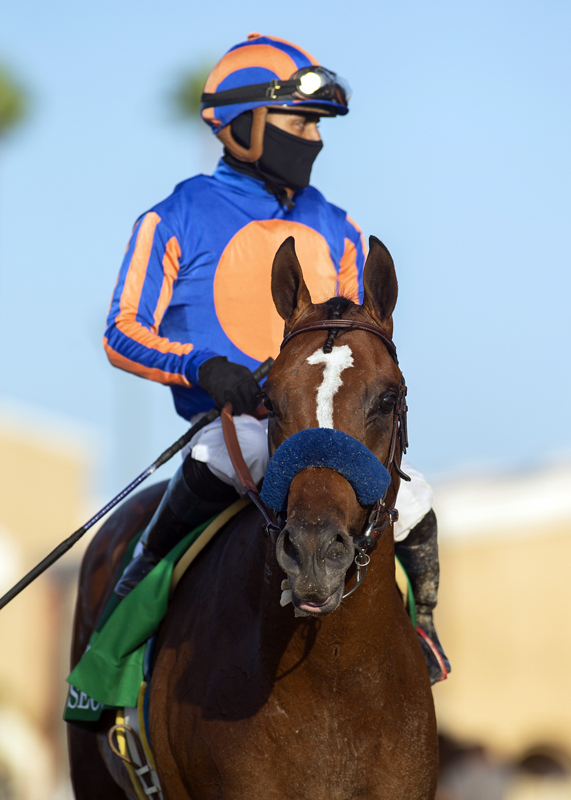 Maximum Security, a winner of nine of 11 starts and nearly $12-million in purses, a remarkably talented and unfortunately star-crossed colt, a runner who – despite his enviable record – is looking to reestablish himself as the big dog on the American racing scene, gets his chance to do just that at Del Mar Saturday when he headlines the track’s headliner on a five-stakes afternoon -- the Grade I, $500,000 TVG Pacific Classic.

The son of New Year’s Day, bred by owners Gary and Mary West, who have added partners to his ownership group in the European trio of Susan Magnier, Michael Tabor and Derrick Smith, will take on five rivals in the mile and a quarter for 3-year-old and up and he’ll have Abel Cedillo in the boot for the run. Cedillo rode the bay to a hard-fought nose victory in the San Diego Handicap here on July 25 in his first start in five months and first under the care of trainer Bob Baffert. The 4-year-old carried topweight of 127 pounds that day but, under the weight-for-age conditions of the “Classic,” he – and all the other runners – will go postward with 124 pounds Saturday.

The TVG Pacific Classic offers all the monetary and prestige advantages of a $500,000 Grade I race, but it also provides a notable plus in that it is a Breeders’ Cup “Win and You’re In” race, meaning its winner gets a guaranteed entry into its designated race, one with all fees paid. In this case that race is the $7-million Breeders’ Cup Classic, which will be run on Saturday, November 7 at Keeneland in Lexington, KY.

Here’s the field for the 30th edition of the TVG Pacific Classic from the rail out with riders and morning line odds:

The TVG Pacific Classic is Race 10 on Saturday’s 11-race program, the premier offering of five Graded stakes on the card. It has a $300,000 winner’s share.

Maximum Security finished first in the 2019 Kentucky Derby, but was disqualified and placed 17th in the world’s most famous race. Then this year he again finished first, this time in the world’s richest race -- $20-million Saudi Cup -- only to have his purse money put on hold because of issues with his previous trainer and allegations of the use of drugs on his horses. The horse surely does his share with the running; he could, however, use a bit of racing luck besides.

Higher Power won this TVG Pacific Classic last year and will be a stout threat to repeat on Saturday. The 5-year-old horse by Medaglia d’Oro shows a record of five firsts and a bankroll of more than $1.5 million to his credit.

Sharp Samurai is switching from grass to dirt to try his luck Saturday. The 6-year-old gelding by First Samurai has won eight races and more than $800,000, but only shows three dirt starts from 20 total outings.

Mirinaque is a South American by way of Argentina making his U.S. bow Saturday. He was a four-time winner in his native land, among them a pair of Group 1 races.

Dark Vader will be looking for his first stakes win in the TVG Pacific Classic. He’s a 5-year-old horse by Tale of Ekatai.