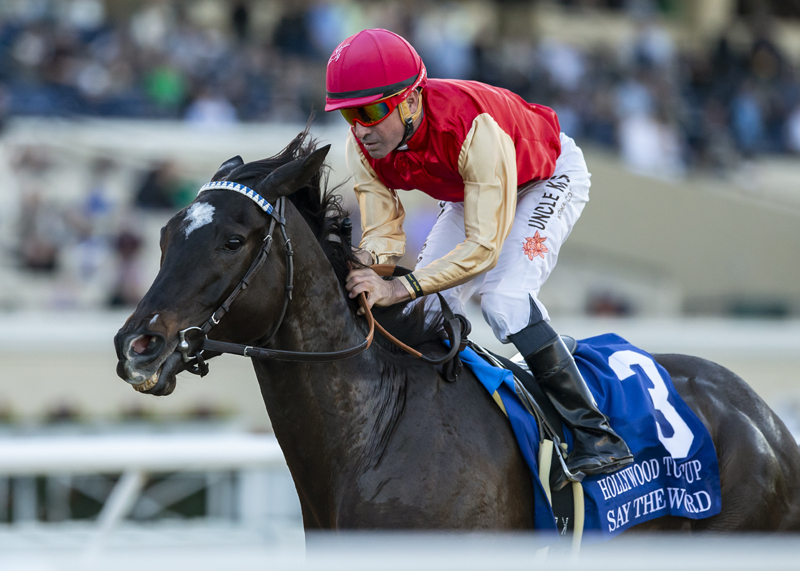 Agave Racing Stable and Sam-Son Farm’s Say the Word swung clear at the top of the stretch and scampered down the lane to capture the $251,000 Hollywood Turf Cup at Del Mar Friday afternoon.

The 6-year-old gelded son of More Than Ready ran a mile and one half on the Jimmy Durante Turf Course in 2:27.62 under Hall of Fame rider Kent Desormeaux to score by a length and take down a first prize of $150,000 in the Grade II headliner.

Phil D’Amato trains the winner and he also trains the runner-up, The Ellwod Johnston Trust, Timmy Time Racing, et al’s Acclimate, who set all the pace in the marathon, but couldn’t hold off his stablemate at the end. Finishing third a neck back was Mr. and Mrs. William Warren Jr.’s Friar’s Road.

Desormeaux, who was winning his 86th stakes at Del Mar, kept his horse covered up for the majority of the journey, shifted him all the way outside at the top of the lane and kept him to a drive to the wire. It was the veteran’s seventh lifetime score and the winner’s share increased his earnings to $882,792. All of his wins have come on the turf.

In the track’s continuing Pick Six Single Ticket Jackpot Wager, the bet once more couldn’t be conquered by the fans and its carryover moved up to $510,986. With only two days of racing left in the season, there’s a real possibility that the wager could go all the way to Sunday’s closing day and cause a mandatory payout that afternoon, a situation that usually greatly enhances the pool for the players.

First post for both Saturday and Sunday’s races will be 12:30 p.m.

KENT DESORMEAUX (Say the Word, winner) – “I’ve got to give Phil (trainer D’Amato) the credit for this one. He told me it was hard to get this horse to settle, so I told him I’d do the European thing: I’d put him up some horse’s rear (force him to stay in position) and wait until the end. My peers always ask me who’s my star and what that means is I’ll put a star by the horse that I think will carry me 70 yards from the wire. And Umby (rider Umberto Rispoli) had the star today (Rispoli was aboard Friar’s Road, the horse Desormeaux drafted in behind).”

PHIL D’AMATO (Say the Word, winner) – “This horse has had so much trouble before this; it was great to see him win. Kent (Desormeaux) did like he said he would and kept him covered up, then go him clear in the stretch and let him stretch his legs.”

The stakes win was the second of the meet for rider Desormeaux but his first in the Hollywood Turf Cup. He now has 86 stakes wins at Del Mar, ninth most all time.

The stakes win was the second of the meet for trainer D’Amato but his first in the Hollywood Turf Cup. He now has 34 stakes wins at Del Mar.

The winning owners are Agave Racing Stable (Mark Martinez of San Antonio, TX) and the Sam-Son Farm (Rick Balaz of Ontario, Canada).  Sam-Son is also the breeder of Say the Word.