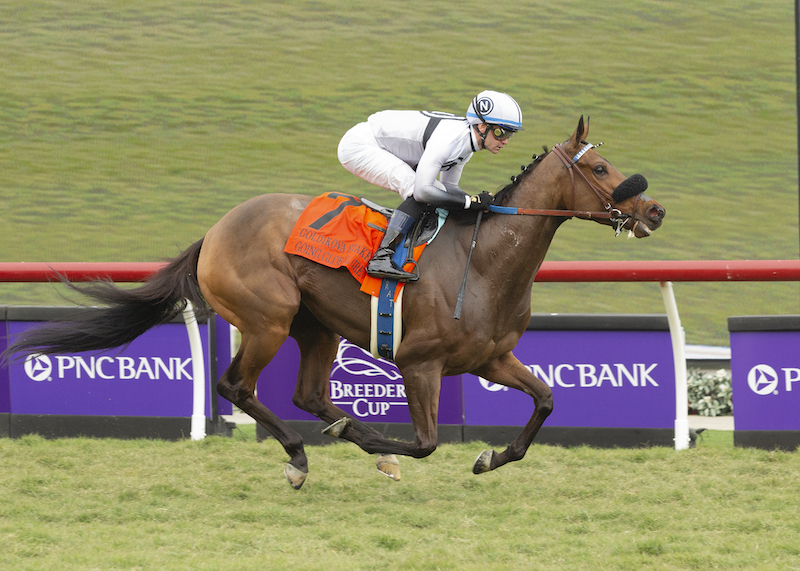 A pair of Grade II stakes for the distaff set will top a 10-race card at the seaside oval known as Del Mar Saturday. First post for the afternoon delights is 2 p.m.

First up in the stakes ranks is the 70th edition of the Yellow Ribbon Handicap, a mile and one-sixteenth spin on the turf course for fillies and mares, aged 3 and up. The race carries a $250,000 purse and has drawn a field of seven headed by the multiple-stakes winning 4-year-old Going Global.

The next stakes offering will be the 54th running of the Sorrento Stakes for 2-year-old fillies. This six-panel dash has lured six runners and matches up a pair of dashing femmes in Absolute Zero and Procrastination seeking the largest share of the $200,000 prize.

Going Global, who is owned by Dubb, Gevertz or Nentwig, et al, has won eight of her 14 lifetime starts and compiled a bankroll of $817,292. The Irish-bred by the Acclimation stallion Mehmas raced in her native land as a 2-year-old, winning one of two starts, then went right on a roll at age 3 in the U.S. She won four straight stakes, then ran second in one before winning two more. The bay has raced twice this year – winning the Grade II Royal Heroine at Santa Anita, then coming back there to finish a close-up third in the Grade I Gamely.

Trainer Phil D’Amato has named Umberto Rispoli to ride Going Global Saturday and they’ll break from Post 2 in the lineup. Morning line maker Jon White has hung her a solid 6/5 favorite in the stakes.

In the Sorrento, which is seen as the major stepping stone to the meet’s top offering for 2-year-old fillies – the $300,000 Del Mar Debutante on Saturday, September 10 – the chestnuts Procrastination and Absolutely Zero loom large.

The former, a daughter of Not This Time foaled in Kentucky, has started only once, but it was a dandy. The Eclipse Thoroughbred Partners’ miss ran off and hid from a field of straight maidens in good time for five furlongs at Los Alamitos on July 4, finally reporting home eight lengths the best. She was handled that day by rider Ricky Gonzalez and trainer Mike McCarthy has named him back for the Sorrento.

Absolutely Zero, a California-bred by Kentucky Derby winner Nyquist, has won both his outings, the most recent the Fasig Tipton Futurity at Santa Anita on June 18. Trainer Doug O’Neill has had rider Mario Guiterrez up for both the filly’s scores, so you know he wouldn’t go any other way for the Sorrento.

Procrastination is listed at 8/5 on the morning line with Absolutely Zero just a tick behind at 9/5.

Here are the full fields for both races from the rail out with riders and morning line odds: