'Safety Seven' Out to Protect and Serve Horses and Horsemen 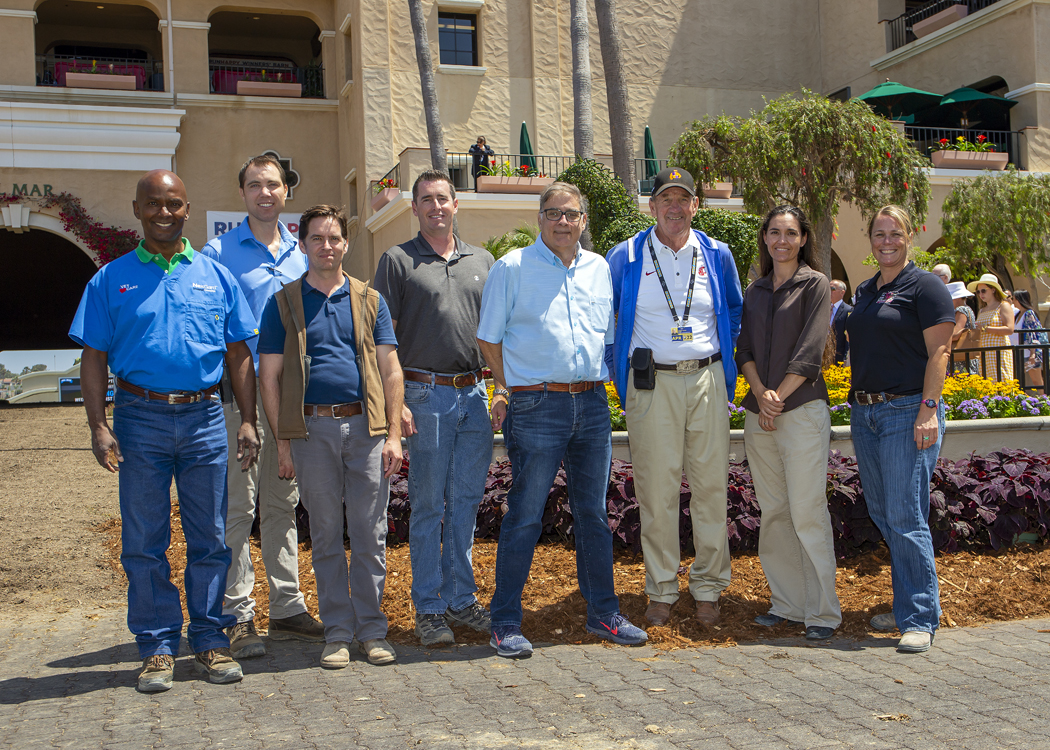 Let’s call them the ‘Safety Seven.’

Granted, it’s not a grabber of a group name like the ‘Seven Samurai’ or the ‘Magnificent Seven.’ But the seven veterinarians on duty this summer at the behest of the California Horse Racing Board and the Del Mar Thoroughbred Club, under the direction of CHRB equine medical director Dr. Rick Arthur, could be said to share some kinship with the title characters from the 1954 Japanese movie and the 1960 American version of the film, both of which are considered classics.

The seven, all with multiple degrees in veterinary sciences and decades in the profession, are tasked to use their skills, individually and collectively, to protect a village and a people under threat.

Not a 16th century Japanese village. Not a group of Mexican farmers in Old West times. Not from marauders and bandits.

The understood assignment of the Summer of 2019 group is to protect and serve a DMTC village, and a Southern California Thoroughbred industry, that was subjected to threats of eventual extinction during the dark hours of the Santa Anita meeting. “This is a tipping point,” said Josh Rubinstein, DMTC president and COO on the eve of the July 17 start of the meeting.

In light of the Santa Anita developments, Del Mar introduced new safety and welfare initiatives bolstering ones instituted two years earlier that had proved effective and made it one of the safest tracks in the country.

Chief among the initiatives was a new five-member panel of veterinarians and equine safety experts employed by the CHRB to review medical, training and racing history of every horse entered, with the authority to scratch any of them that prompted questions or concerns.

The ‘Safety Seven’ are all involved in the checking processes. Divided into four categories they all spoke, in recent interviews, about their jobs and themselves.

Hall of Fame trainer Richard Mandella was looking out at the track where Omaha Beach was galloping on the morning of Monday, July 15, when Dr. Barrie Grant walking past and checked on the time for a workout of one of Mandella’s horses scheduled for the following day.

“It’s a 4-year-old maiden that has never run, but you have to get them checked by the vet. He’s going to watch the horse work tomorrow,” Mandella said. “That’s OK, I have no problem with that. I’m happy to work with whatever rules people make, as long as it’s the same for everybody.”

Dr. Grant, in his 10th year at Del Mar, is one of the three “official” CHRB appointed veterinarians for the meeting. He monitors training on the non-racing Monday and Tuesday mornings targeting horses that are on the “watch” list for various reasons looking for any concerning signs.

“My duties aren’t any different than they have been for the past two years when Del Mar started looking at horses that could be problematic,” Grant said. “Del Mar has been proactive and I think it has made a difference.”

Grant, 76, has degrees from Washington State University and UC Davis and has been practicing veterinary medicine for more than half a century. When not around horses in his practice, he has enjoyed being with them recreationally and is a two-time champion in the “Rope and Tie” competition that includes running and riding.

Dr. William Farmer, 38, is in his fourth summer at Del Mar after doing similar work in Kentucky for nine years. The Louisville, KY, resident summers at Del Mar and spends the rest of the year as “Mr. Mom” to two daughters, aged seven and five, while additionally helping out with his wife’s dental practice.

“I oversee all the private practicing veterinarians to see that everybody abides by the rules,” Farmer said. “In the afternoons I oversee all the anti-doping testing here in the (receiving) barn.”

On average, two horses per race are tested, sometimes more.

“From the anti-doping side, we’re always trying to be proactive,” Farmer said. “We’ve done pre-race testing in California for years. But we’ve really ramped up the numbers. Some of these horses are being seen two or three times before they race, not just on race morning.

“The area that we’re really focusing on in light of Santa Anita is training. Injuries that happened in training that weren’t really being noticed before are being highlighted now.”

Dr. Tim Grande, 42, has worked at Del Mar, in one veterinary capacity or another, since 2010. His full-time status in 2019 is in part an offshoot of the Santa Anita situation as his duties this summer reflect.

“I’m part of the panel that reviews entries,” Grande said. “Once we determine what horses we want to give extra scrutiny to, a lot of them require physical examinations. I will arrange with the trainers to look at them anywhere from 72 to 24 hours before race day, give them a physical exam and make a decision on whether they’re allowed to go forward.”

The five-member panel uses a range of data, from that found in the Daily Racing Form, to medical records and history.

“It’s not just to get horses out of races,” Grande said. “It’s to establish good communication with the trainers and get information that maybe we don’t have other access to. If, for example, a horse is coming off a layoff, we might not know why and the trainer can tell us.

Grande has made Del Mar a part of his summer for more than two decades. He got a job as a hot walker and groom before graduating from UC Davis veterinary school in 2000 and has worked as both a private and/or official veterinarian here since.

Dr. Dana Stead, 38, is hired by DMTC and is the most visible of the group in that he is in the paddock to observe the saddling and walking of the horses before each race. The Colorado State graduate has served as an association veterinarian for all the tracks on the Southern California circuit for the past 10 years. “Going back to Hollywood Park when it existed,” he points out.

“I’d say that I’m happy with all the reforms that have come from the public and media outcry over the situation at Santa Anita, and I think they are making a difference,” Stead said.

Drs. Alina Vale and Laurie Bohannon can be found most mornings on towers just past the finish line and near the five-eighths pole on the backstretch, respectively, looking down on the streams of horses exercising below.

“We’re trying to identify horses that aren’t traveling well,” Vale said. “Horses constantly adapt their skeletons to the pressures put on them in training and if we can detect minor injuries before they become major ones, then that will make things much safer for the horses and riders.

“We’re looking for asymmetry in the way the horse is moving and if it seems to be carrying more or less weight on one leg or the other. We make notes of what we see and then we have one of the official veterinarians go into the barn and check the horse out and watch it jog. That way we determine if that is the horse’s natural way of going and what we saw was normal, or if there is an underlying issue that needs to be addressed.

“We have been getting a lot of cooperation from the owners and trainers. There are a few who aren’t used to this new way of doing things, but I think that by the end of Del Mar they will realize that it’s a necessity.”

“I grew up as a horse-crazy girl,” Vale recalled. “I rode horses that had been retired from the racetrack, but I never had really been to the track. I heard the bad things that were said about racing. But when you come in the mornings and you see the people that are dedicated to the horses every day, you see another side of racing.”

Vale, 34, from San Diego and a Rancho Bernardo High grad, started riding when she was five and has three horses in her “backyard” at the present time. A graduate of UC Davis with a masters in veterinary forensics, she has worked at veterinary hospitals in Kentucky, under the renowned Dr. Larry Bramlage, and also spent three years working in Dubai. Like Dr. Grant, she’s a former Ride and Tie champion.

Dr. Bohannon, 47, is a Colorado State graduate with an advanced degree in veterinary surgery from UC Davis. Her station on the backstretch near where the equine ambulances are positioned gives fast access to attend and aid in emergency situations.

Like Dr. Vale, she has a near lifelong history with horses and competed in Ride and Tie and endurance events, some up to 100 miles in distance, and has totaled over 7,000 miles on horseback over the years.

Dr. Nolton Pattio, 62, a veterinarian for 36 years, has worked at Del Mar since 1991. He fine with the “Fill-In” designation, which he says is apt.

“I substitute, where needed, and I’ve got about seven jobs on the racetrack,” he said. He does many things that the above veterinarians do, and in addition works with another veterinarian and two technicians in the Lasix department, which is responsible for race-day administration of the diuretic drug.

Pattio, the son of a jockey who was raised in the Bay Area, graduated from UC Davis studying agriculture, earned a veterinary degree at the University of Pennsylvania, and did internship and residency in large animal surgery at the University of Florida. He has had a private practice, taught and spent three years in Dubai. He’s married to a veterinarian and is a father of four.

He sees a silver lining in the dark clouds that have loomed over Southern California horse racing through the winter, spring and early summer.

“I think this whole (Santa Anita crisis) has been one big wake-up call for us,” Pattio said. “It’s unfortunate what has happened. But we need to modernize our sport and I think some of the reforms are needed. It has resulted in changes in medication, changes in oversight, changes in training practices, a lot more veterinary and regulatory scrutiny on the horses. I think we will get through it and come out the better for it.”