Safety is the Name of the Game for Former Rider Jauregui 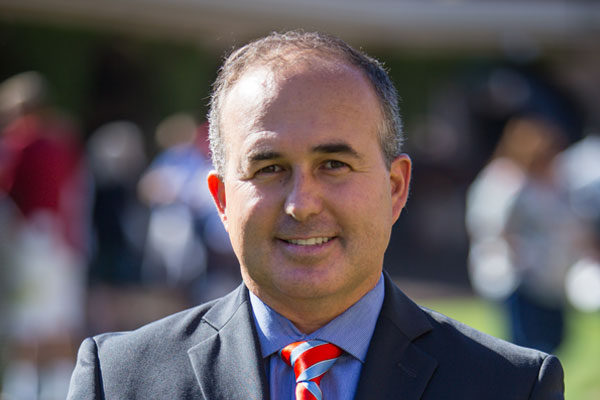 Luis Jauregui © Zoe Metz for Del Mar Thoroughbred Club
By Mac McBride
It’s early in the morning and Luis Jauregui is somewhere on the backstretch at Del Mar. He might be chatting with a groom about the tack he’s working on. He could be kibitzing with a trainer about the advantages of having horses on site as opposed to shipping in. He might be checking with the trackman about the depth of the dirt racing surface.
He could be doing one of those things – or any of dozens of others that tie into the everyday business of the racing community going through a workday.
He’s an easy-going guy, ready with a smile and he makes a point of being approachable. He also makes a point – over and over again – that the reason he’s there is all about Safety, with a capital S.
Jauregui, who has spent the vast majority of his 47 years at the racetrack, is Del Mar’s Safety Steward. He often performs the same job at Santa Anita Park and Los Alamitos, provided he is assigned to do so (which of late he often has been) by the people he works for -- the California Horse Racing Board.
It was the late Kirk Breed in his role as Executive Director of the CHRB who in 2009 first took a portion of the Stewards’ general job description – namely being responsible for safety at the racetrack – and made it specific with the role of a Safety Steward. The first man he assigned to the role in Southern California was Jauregui.
“Louie,” as he’s known by most, is the son of an exercise rider and was hanging around Southern California racetracks starting at the age of 3. With that background and his less-than-large body type, it was hardly a surprise when in 1988 he started riding racehorses for a living. He wasn’t bad at it either.
He loves to tell the story – and he’ll show you the video – of a race at Hollywood Park in 1989 when kid apprentice Jauregui, given a chance by the great trainer Charlie Whittingham to not just gallop his horses in the morning but ride one in the afternoon, skimmed the rail, cut the corner and worked left handed on a little, bitty gray horse named Runaway Prince to get up in a wicked four-horse photo over three guys who all would be installed in the Hall of Fame named Pincay, McCarron and Delahoussaye.
Fast forward nearly 20 years later – after more than 8,000 mounts and nearly 750 winners – and here was Jauregui looking for other ways to go with a career. He had a bad race riding incident in 2005 when his horse went over the rail and he wound up with a broken back. There was much time to reflect and ponder what might be ahead. He considered several options and then decided to take a crack at being an official.
He studied hard and took the stewards’ test and passed it, but had to wait for a spot to open. He was back riding when – as he prepared to saddle up on a Friday evening at Hollywood Park (on December 15, 2006 to be exact) – he got a call saying the CHRB wanted him to go to work as a steward. But it had to be the very next day.
Jauregui said yes, then went out and rode the final race of his career aboard a filly named Charmin Dot for trainer Roger Stein. In an only-at-the-racetrack finish to his horsebacking career, Louie got his mount up at the wire and saw her pay $162.60 for a deuce. 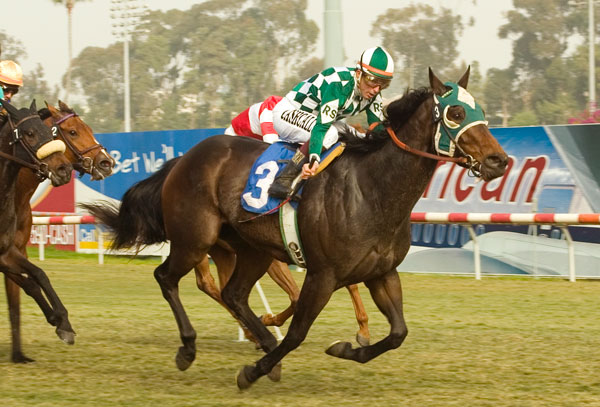 Jauregui aboard Charmin Dot © Benoit Photo
The next day he was on the job as a steward and over the next several years he filled the roles of associate steward, then assistant steward at racetracks around the state. In 2009 Safety Steward Jauregui was born.
“When Kirk Breed started the (Safety Steward) program the focus was safety of the racing surfaces and making sure jockeys were using approved helmets, vests and riding crops,” says the CHRB’s current executive director, Rick Baedeker.  “But largely through Luis’ individual efforts, the program has expanded. Today, Luis and all the Safety Stewards work closely with our Equine Medical Director (Dr. Rick Arthur) and CHRB investigators to ensure that in-today horses are isolated and secured according to CHRB rules. Luis has helped develop this program into a model for the industry.”
Indeed. When the New York Racing Association decided to put a Safety Steward in place, Jauregui was the guy who trained him. Several other states have implemented Safety Stewards as part of their racing makeup, too. Presently, California has expanded it to the point where there are a total of seven Safety Stewards covering all race meets and licensed stable areas in the state, as well as having a man in their Sacramento headquarters who focuses on data collection from track surface testing and things like the microchip pilot program now underway at Golden Gate Fields in the Bay Area.
Jauregui spends long hours at Del Mar making sure “safety” is in the forefront. Starting at 6:30 in the morning and going until 6:30 at night is fairly standard. He calls on his East L.A. roots and Mexican heritage to use his bilingual skills to serve as an easy sounding board and a source of good information for the mostly-Hispanic backstretch population. And he calls on his many years in the saddle to be at ease talking safety with the jockey colony, especially the youthful apprentices.
“I love working with the apprentices breaking down video with them,” he says. “They’re open to learning. And I like to take it even further than just watching races. I like to talk to them about life away from the racetrack. How they can help themselves conduct their business and their lives. We can talk about nutrition; about finances; about the right way to go about the life they’ve chosen.
“Sometimes I’ll bring in a mentor, someone like a Laffit Pincay or a Chris McCarron, to talk to them. It makes a big impression. Sometimes I get one of our older riders to watch film with them and talk life. Kent Desormeaux is terrific with that. He goes out of his way to help out.”
In 2011, Del Mar was the first track to encourage riders to convert riding crops from the heavy-tipped ones that would sting a horse to the much softer, padded “popper” types that mostly encourage through their loud sound – even going so far as to buy the new crops for riders as further encouragement. Jauregui was on the point in that movement, rallying the riders to go forward with the change. The jockeys did and it started a safety changeover that went national in short order.
On occasion – such as now at Del Mar – Jauregui takes off his “Safety” hat and puts on his full Stewards’ one, pinch hitting in the booth on the roof for one of the three regular Stewards who might be away for any of several reasons. He’s comfortable with that and ready to do so when called on.
But ask him what he really enjoys (other than bragging on his wife, Jennifer, and his two sons – Taylor, 23, who’ll graduate from USC in business next month, and Hunter, “the best 9-year-old wrestler in America”) and it soon goes back to his Safety role, one he notes that the CHRB’s Baedeker has further fostered and enhanced.
“I love being at the track and helping out and hearing concerns,” he states. “A lot of the folks on the backside aren’t comfortable with the thought of going into the Stewards’ office. But they’re fine talking with me. I can explain rules and regulations to them so they make easy sense. I can hear their issues and help them work toward resolving them. I’m a conduit in many ways and I’m glad to be able to do that.
“As I see it, my role as a Steward isn’t to get people into trouble, it’s to keep them out of it.”